Popular among bartenders, Italians, and herbalists, the amaro category spans cherry-red Campari, bitterly black Fernet Branca, and grappa-based Nonino. Amari, the word in plural form, are used to add character and flair to cocktails, or as aperitifs or digestifs.

The exact ingredients and proportions of these botanically-infused liqueurs are jealously guarded. Amaro makers boast about the number of herbs that go into their products, but when it comes time to name them, they’re famously tight-lipped.

But there are some secrets that are just too good to keep. Here are 14 of the most famous ingredients in amari, explained.

Famously bitter, gentian is the sturdy foundation upon which many amari are built. The alpine plant is harvested for its root, which has a prized, self-amplifying bitterness found in such liqueurs as Campari, Aperol, and Suze. The root turns the base alcohol of its maceration, or extraction, a rich golden yellow.

Gentian stimulates and improves digestion, and jump-starts the liver. “Gentian protects the liver and stimulates the liver to produce bile — cleansing and detoxifying,” Emma Tuttleman-Kriegler, a clinical herbalist who works under the name Emma Rose, says.

The rhubarb used in amaro is not the same pie-making plant you might find at your local farmers market. Unlike that hybrid bred for its edible stalks, amaro makers use a type called Chinese or Turkey rhubarb, most notably in an amaro called rabarbaro. Eaten straight, the rhubarb’s root tastes sweet at first, followed by a deep, deep bitter flavor at the back of the tongue, near the throat.

Examples of rhubarb-forward bitters, some of which have a deeply herbaceous smokiness, are Amaro Sfumato and Zucca Rabarbaro.  Not ready to try it straight-up or over ice? Try mixing it with mezcal or your favorite coffee liqueur.

Most drinkers associate wormwood with absinthe, but several species find their way into amaro, particularly grand wormwood and Roman wormwood. Their roots, leaves, and stems provide exciting, complex bitterness, with a hint of sweetness and faint licorice flavor.  Mark Bitterman, in his “Bitterman’s Field Guide to Bitters and Amari,” compares the enigmatic aroma to “walking across a forest floor.”

Wormwood is a principal botanical in Amaro Lucano, according to Leonardo Vena, CEO of Lucano 1894 S.R.L., whose family has been in the bitter liqueur business for generations. Vena notes that terroir and species are important factors for wormwood, as is whether or not it’s in bloom. His family’s recipe includes three types of wormwoods: two botanicals to provide flavor, and an essential oil to provide texture and body. Grand wormwood is more bitter, Vera explains, while Roman wormwood is more balanced, lending more of its herbal, “green” flavor to amari.  “Each botanical gives its own taste,” he says.  “It is impossible to delete even one.” 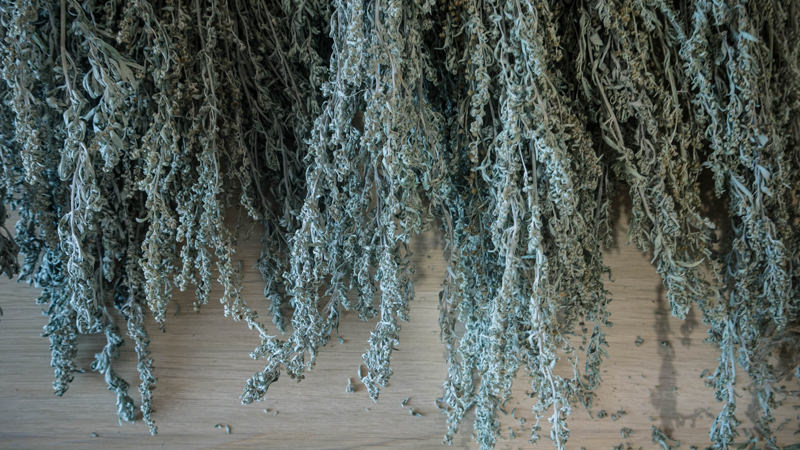 This botanical comes from Andean tree bark in South America and is most famous for lending its bitter flavor to tonic water.  In maceration it has a deep molasses color, a bright, bitter flavor with some tannic astringency, and a mentholated aroma with notes of vanilla and anise that can sometimes add a bit of smokiness to amaro.

Because quinine, an extract from cinchona bark, has been used for centuries in the treatment of malaria, this botanical is the stuff of legends.  One story of its discovery describes a feverish traveler, close to death, drinking water from a pool where cinchona trees had fallen into the water. Feeling restored, he realized the tree must have had curative properties. Another describes how a Spanish viceroy’s wife was cured by the tree’s extracts. “There are so many romantic stories of its discovery because it was near and dear to the hearts of colonists,” Brian Hockaday, a researcher at the New York Botanical Garden’s Institute of Economic Botany, says.

Angelica root has a dryish, sweet scent and barky, woody sweetness, followed by a delayed bitterness at the back of the tongue. Native to Europe, it is related to parsley and dill, and a member of the carrot family.

“It’s a big favorite among herbalists,” Emma Tuttleman-Kriegler notes, adding that it is a great plant for relieving aches and pains.

This fragrant resin, or hardened tree sap, comes from a spiny tree found in the Horn of Africa and parts of the Middle East.  Intensely bitter, it has a medium brown color in maceration. If you’ve ever tried Fernet-Branca, you’ve experienced the powerful sucker punch of myrrh.

Used as an incense and bottle sealant by ancient Egyptians, Greeks, and Romans, myrrh was historically blended with wine, which is why it’s found in so many liqueurs, vermouths, and amari.  The resin is believed to remove toxins, while warming up the body by bringing heat to the body’s core.

This seed pod comes from South Asia, where it is harvested from a leafy plant related to ginger.  In its raw form, the seed pod has an astringent, eucalyptus-like cooling sensation, while its seeds taste sweet and citrusy.

Not to be confused with black cardamom, which is a different species, green cardamom is used by herbalists as a digestive aid, Tuttleman-Kriegler says.  “You want to use cardamom to help disperse the benefits of nourishment all around the body,” she says.  Used in Ayurvedic medicine for centuries, the warming qualities of the botanical can help reduce bloating — perfect for the end of a big meal.

A variety of amari contain cardamom. Those that list it as an ingredient include Contratto Bitter and Luxardo Amaro Abano.

Another botanical that comes to amaro producers via tree bark, cinnamon is generally categorized as Ceylon or cassia.  Ceylon is thinner and comes in very fine curls, while cassia tends to form thick, woody double rolls.

It’s pretty easy to recognize in an amaro, but its expression can vary by recipe.  Sometimes cinnamon will sweeten an amaro, and other times it may provide spice or hotness.

Contratto Aperitif and Meletti 1870 Bitter both list cinnamon in their tasting notes.

This potent fruit comes from a Chinese evergreen.  It has a deep chestnut color and distinctly licorice-like aroma and flavor.

“Botanically, star anise are very interesting because they give us a picture of what early plants were probably like,” Hockaday says. “Star anise is one of the oldest versions of angiosperms,” or flowering plants.

The anise flavor, which was classically derived in Europe from the aniseed, among other sources, is found in a wide swath of alcoholic beverages across Europe and beyond. “Almost every European culture used to use it at some time,” Louis Catizone, co-owner of St. Agrestis amaro, says.  “It’s had a long-lasting and serious impact on what we drink today.” This botanical, grown in vines in Central America, is most widely known for flavoring a soda of the same name, as well as some root beers. Its root has a dark coffee color and an earthy flavor with notes of vanilla and cinnamon.

“When I have a tasting and people are snapping their fingers trying to name the taste they recognize, and I say the word ‘sarsaparilla,’ they are always like, ‘Yes, that’s it,’” Catizone says.

There are dozens of species of sarsaparilla used in pharmacology, according to Hockaday, and some 300 species in the genus. The Mexican variety is “still very popularly used all over the Americas,” he added, noting that at one point it was “famously used as a remedy against syphilis.”

Both peppermint and spearmint belong to an aromatic family of herbs with square stems, but taste quite different. Peppermint is sharper and spicier; spearmint is mellow and sweeter.

Mint has been used for “thousands of years” by herbalists, Tuttleman-Kriegler says. It’s great for digestion and “healing the gut-mind connection.”

Many fernets, such as Branca Menta or Fernet Leopold Highland Amaro, show off minty bouquets.

With both bright and bracing flavors, this citrus fruit does double duty in amaro.  Without citrus to relieve the tension between bitter and sweet, Catizone says, an amaro just doesn’t have all the notes it needs. He breaks ingredients into three categories: sweet botanicals, bitter botanicals, and citrus.

All citrus comes from Southeast Asia, according to Hockaday. Over time, as citrus was interbred, certain characteristics began to stand out. “It’s like folding dough a million times into a croissant,” he says.  All of this hybridization led to the wide variety of citrus available today, from limes to grapefruit to tangerines and more.

This root from the iris family has a long history in perfumery and pharmacy, because it keeps volatile aromas from escaping solutions. In maceration, orris has a nuttiness that blossoms alongside a warm, vaguely violet fragrance. It’s earthy, sweet, and pleasant.

To make orris root, iris rhizomes are dried and slowly oxidized for years. It is commonly used in such amari as Falcon Spirits Fernet Francisco and Fernet-Branca, and in some gins.

A relative of the South American yerba mate plant, this shrub hails from the southeastern United States. It has a “green tea, herbaceous flavor,” Scott Blackwell, founder of High Wire Distilling Company, says. High Wire uses the plant’s leaves as a chief ingredient in its Southern Amaro Liqueur.

Yaupon holly contains the stimulants caffeine and theobromine, used to protect the plant from insects. For amaro makers — and drinkers — finding jazzy botanicals like this holly are part of what makes these bitter liqueurs so fun.