When it comes to wine-fueled vacations, Napa, Tuscany, and Burgundy can do no wrong. However, there’s an abundance of breathtaking wine regions around the globe just waiting to be explored. While we definitely condone hitting the staples, we highly recommend using some of your coveted vacation days to jet off to one of these gorgeous wine-producing regions on your next grape-filled getaway. Check out these 10 breathtaking wine regions for some serious wine drinking vaca-spiration. Malbec lovers, this one’s a no-brainer. However, there’s more to Mendoza than just Malbec; in fact, the region supplies nearly two-thirds of the entire country’s wine production! Check out some interesting local varieties, like the pink-skinned Cereza and Criolla Grande, all while sipping beneath this stunning view of the Aconcagua mountain, the highest mountain in the Americas! Surf your way across the Southern Hemisphere and head to Barossa Valley, one of Australia’s oldest wine regions. Many of the country’s most renowned wineries (hello, Penfolds!) are located here, with numerous vineyards possessing vines over 100 years old. When it comes to discovering the beauty of Shiraz, Barossa is the way to go. With Provence as the go-to choice for wine-fueled vacations in the south of France, the hidden gems of the Languedoc-Roussillon often get forgotten. For lovers of sweet wine, head to Banyuls sur Mer, where rare, delicious, reds reign. For a change of pace, take a short, breathtaking drive along the Mediterranean — Spain is just a half-hour away! While technically part of Spain, this small chain of islands sits a mere 60 miles off the coast of Morocco. Head to Lanzarote, the easternmost island of the chains, to discover the gorgeous, black volcanic sands of this off-the-beaten-path region; save some afternoon hours for the sea as well — allotting for beach time is a must. Convinced you need to plan a trip? Check out our guide to wine from the Canary Islands! 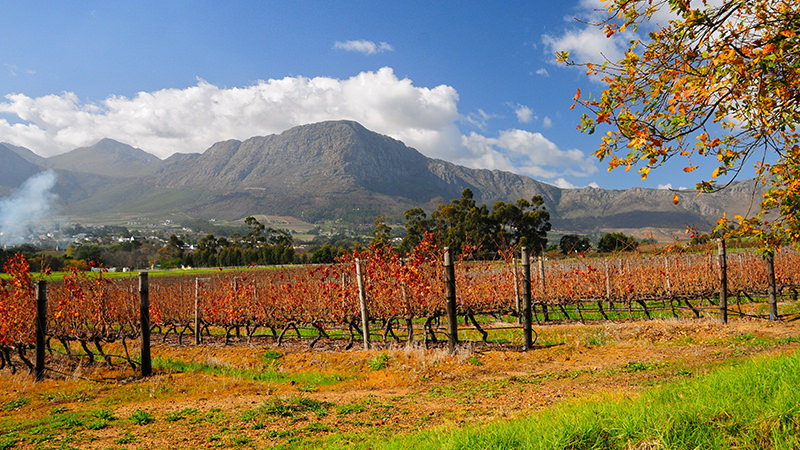 Head to this historic wine region in the Western Cape of South Africa, brimming with centuries old vines and a fascinating history. Originally settled by French Huguenot refugees in the late 17th century, the original Coin Francais eventually morphed into Franschhoek, Dutch for French Corner. Nowadays, the village is dotted with quaint bed & breakfasts, French-influenced restaurants, and an array of wineries producing crisp Sauvignon Blancs & Chenins, as well as fuller-bodied reds from Cabernet Sauvignon and Shiraz. Greece tends to fall on most jet-setters to-do lists anyway, so slipping Santorini into your wine-destination index actually kills two birds with one stone. Quench your thirst against this jaw-dropping backdrop with some of the region’s indigenous white varieties; Assyrtiko, Athiri, and Aidani. Head to this high-altitude region to discover some of Chile’s latest and greatest wine-producing sub-zones. Dry climates and strong diurnal shifts have given way to strong success with Syrah, with Bordeaux varieties beginning to pop on the scene. South American wine sipping has never looked so good. Who says you have to leave the country to experience an exquisite wine adventure? Step aside, Napa and Sonoma — we’re headed farther south for our next California wine discoveries. The Santa Ynez Valley, comprised of the Sta. Rita Hills, Ballard Canyon, and Happy Canyon, has an array of climates, with cooler, foggier conditions dominating near the coast that become progressively drier and warmer moving inland. Pinot Noir and Chardonnay dominate, with Rhone varieties becoming more prevalent on the eastern side of the Valley. This southern Croatian wine region runs along the country’s western coast, experiencing a Mediterranean climate of long, hot summers and quick, mild winters. Terroir plays a huge role in Dalmatia, as many microclimates exist within the region. Dalmatia is loaded with indigenous varietals, though be sure to not miss Plavac Mali, one of the parents of America’s beloved Zinfandel! There’s really nowhere in the world quite like the Douro. Steep sloping vines line the snaking Douro River, producing plump, juicy grapes destined for everyone’s favorite after-dinner beverage. We’re not sure which will take your breath away first — the steep, winding dirt roads, or the actual view of the valley itself.