Ancient Campania: this was the playground of the Roman elite. It’s home to Naples, stunning coastlines and the birthplace of pizza, as well as the creator of Limoncello and the famous Mozzarella di Bufala. All of these culinary delights are wonderful contributions to Italian culture, but in the interior of this densely populated area is the region’s most significant hidden gem, a patchwork of very unique wines.

Like all Italian regions, both red and white wine are made in Campania. The most popular red is Taurasi, made from the Aglianico grape. These reds can be quite expensive but are definitely worth the price, grown in volcanic soils which gift us with a highly tannic wine filled with notes of coffee, raspberry, cherry, leather and a bit of smoke.

But it’s hot outside, so we’re going to skip Campania’s reds and go straight to the whites, because they’re some of the most interesting white wines in all of Italy. So let’s cool down a bit and talk about these often quite affordable wines you should not be missing out on.

Flanerian wine is said to be the most famous wine in ancient Rome, with the Falanghina grape as the key ingredient. Back in the day, the wine was dark in color and could be made dry or sweet, depending on preference, and it had the ability to be aged almost twenty years. Today, Falanghina is a very different wine, made in Falanghina di Sannio DOC which is located east of Napoli. Usually priced in the $10 to $15 dollar range, these wines are incredibly refreshing with high-toned acidity. The wines cleanse your nose and palate with notes of lemon, citrus, crisp apple and pear. These wines are most often not oaked and are instead fermented and aged in stainless steel tanks, allowing the wine’s inherent characteristics to shine through.

Where Falanghina is lively and high-toned, Finao is cool and deep. It welcomes you with a nice, soft golden straw color and offers notes of almond, spice and a hint of tropical fruit. While being fuller bodied than Falanghina, these wines still retain a bright acidity, allowing the minerality to shine through and holding all the flavors and aromas together. There is also a comfortable weight on the palate that can sometimes give off a slight smoky note, due to the volcanic soils in which the vines grow.

There are fifteen DOC zones in Campania (Falanghina has one) and four DOCGs, with one dedicated to the Fiano grape, Fiano Di Avellino. Here is where you’ll get the purest example of the wine, and better yet, the price is easy on the budget, in the same range as Falanghina. Outside the DOCG Fiano gets a little more lean, eschewing the almond notes for the more citrusy realm, yet it is still a very satisfying wine.

Greco is thought to be a 2000 year old variety of grape with an almost mind-numbing amount of strain mutations along the way. In the 1990’s, when DNA profiling was used to identify the origins of grapes across the world, the greco family of grapes was too old and ubiquitous to get a lock on its parentage. Knowing that, the Greeks brought a plethora of vines from their homeland, planting them all over southern Italy. Italian winemakers have come to give respect to the ancient importers calling the family Greco Bianco.

The Greco Bianco grape can be found throughout other southern regions, such as Puglia and Calabria but it really makes its home in Campania. It even has it’s own DOCG (one of the four). In and around the town of Tufo, located in the Avellino province – the same area as the Fiano DOCG – Greco Di Tufo takes the characteristics of the wines mentioned above and pulls an Emeril by kicking them up a notch. Tufo is not only the name of the commune but also the soil that runs through this area, an almost chalky red clay that break apart very easily, allowing for the wonder of natural drainage.

The result of this soil is a wine that’s often compared to French Viognier. Dark gold in color, this wine has a nice dose of minerality that swims through a grapey (yes I said grapey) roundedness held together by notes of caramel. These white wines have a soul to them but are best consumed in their youth due to their tendency to oxidize sooner than later. This oxidation can actually add to the structure and complexity of the wine when in the right hands, but you have to trust your wine merchant to find one of these great oxidized wines.

Outside of the Tufo DOCG Greco Bianco lightens up a bit, especially in the Aversa DOC to the north, where the grape is referred to as Aspirinio. Here it retains more acidity and is rounder on the palate.

All of the white wines of Campania are great for this time of year. Fire up the grill and char up a thin crust pizza. Grab some Mozzarella di Bufala and make yourself a Caprese salad. And when you’re sated and satisfied, get out the juice glasses and have a bit of Limoncello to digest it all. 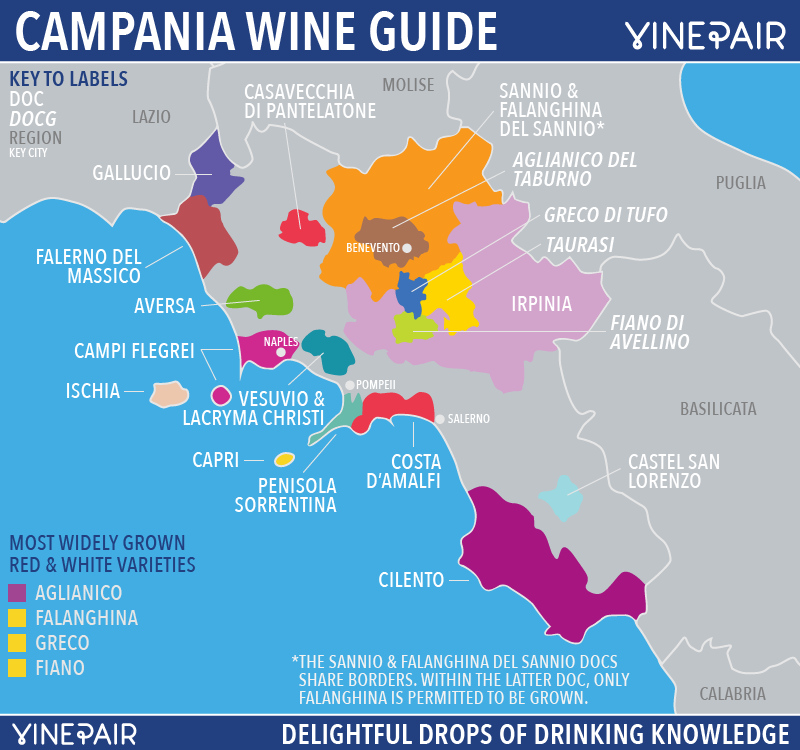