Brian Nelligan was just a normal guy living in Austin, Texas, with a standard home bar until he and his wife decided to move. All of a sudden, they found themselves in a new home with a room they were unsure of what to do with. As Brian told VinePair, “My wife and I had just bought our new house and were talking about what we could do with all the rooms and how to decorate them. There was what was intended to be the study, a small 13′ x 11′ room with french doors that I planned on making into my office. I had just sold my previous bar before the move, a simple rectangular thing with some bottle and glass storage and was looking to get something nicer. That was when my wife said to me, “What if instead of an office we made this into a bar room?” Most people who might turn a room in their home into a bar go the basic route. Maybe they build something custom, add a bit of flare, but they certainly don’t turn that room into a speakeasy that would rival some of the coolest bars in cities across the world. “As soon as my wife made the suggestion to turn the room into a bar my mind started racing with ideas,” says Brian. “My favorite bar is this speakeasy in San Antonio called 1919. It’s an unmarked building with no sign and black tinted windows that’s beneath another bar just off of the San Antonio River. A friend took me there a few years ago and walking into this place I was just stunned by this beautiful long bar with an amazing liquor selection. There were comfortable leather chairs and couches and jazz music playing. The bartenders there truly know their craft and I was impressed by their signature cocktails and infused liquors, particularly the sweet potato whiskey. After that I wasn’t just in love with classic cocktails, I was in love with the era of 1920s Prohibition. After my wife gave me the idea to dedicate an entire room to the bar I knew I wanted it to be a 1920s speakeasy style.” Brian continues, “The bar has been an ongoing project, it’s constantly changing and evolving and I still have a lot of plans for this place. The process began with finding the right bar for the room. I wanted something dark and classic, preferably in an L shape. We searched at countless furniture stores, consignment stores, and antique stores. We almost bought a bar that was entirely too large for the room, it literally would have taken up half the room, and in hindsight I’m glad we were patient and kept looking. I finally found the perfect bar on Craigslist of all places. It was located in Dallas and although I hadn’t seen it with my own eyes I knew it was perfect. It was L shaped, the perfect dimensions to fit the room, had a canopy for extra storage, and had this beautiful mahogany finish. I had to bribe a friend of mine to drive us up there in his van and haul it back down.” But finding the bar was just the first step, says Brian: “After we had the bar I was able to come up with a color palette for the room and start the process of finding studded leather furniture, antique lamps, and so on. A good amount of the work was DIY. I found a back bar on Craigslist for $50 and stained it to match the bar.”

“My mother in law and my wife put up the beautiful damask pattern wallpaper.” Then came the finishing touches: “I installed lighting on the sides of the back bar and put in a chandelier in the center of the room where the ceiling fan was. I put up the wine colored drapes and valance. I also added a hidden speaker loaded with my favorite jazz music from the 20s and 30s. I then had a local artist make me some tintype portraits of musicians and starlets including Louis Armstrong, Cab Calloway, and Belle Bennett (a distant relative of my wife’s).”

“Just above my chair in the corner near the entrance is a framed brass knuckles. This is a small homage to the criminal element that thrived during prohibition and a symbol of the bootleggers and mobsters who came to embody the culture of that era.” More recently I’ve begun acquiring barware and other artifacts from the 1920s. I have a nice silver bar knife, a couple of decanters, this cool jigger that is marked every half ounce and has a lever that dispenses liquid out of the bottom, I have an antique picture from the famous Driskill Hotel here in Austin, I’ve collected a few whiskey prescriptions from prohibition and a bottle of “spiritus frumenti” from Frankfort Distillery, one of only six distilleries allowed to continue operations for “medicinal” purposes. 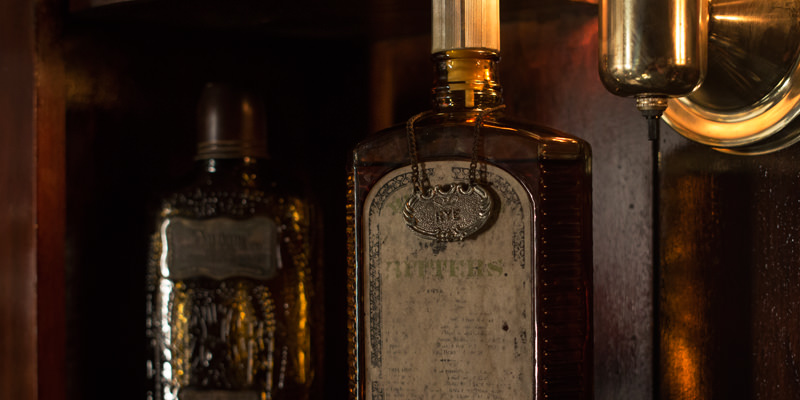 Brian breaks down the experience of grabbing a drink at his watering hole:

“When I entertain company at my bar I want people to feel like they’re stepping into a different era. You push through the frosted glass french doors into a dimly lit room that smells of leather and cigars. Music from early jazz masters like Billie Holliday and Ella Fitzgerald pumps through the room.” “If it’s someone’s first time here I like to find out what flavors they like and surprise them with a cocktail they’ve never had before. I also keep a menu of the classics to help people decide what sounds good to them. In addition to the stock of basic spirits and liqueurs for mixing cocktails I keep a small collection of well aged bourbons and scotches as well as a good bottle of rum and tequila for drinking neat or with a sphere of ice.” “We did a bourbon tasting after our trip to the Bourbon Trail in Kentucky where we sampled several of the bottles I brought back. We generally have friends over a couple of times per week, so I always make sure to have fresh fruit on hand for juices and garnish.” “We also like to throw themed parties, one of my favorite being a Gatsby party where everyone dressed in period clothing.” “Sometimes, though, it is really nice just to have the room to myself. After a long day there’s nothing nicer than sitting back in a comfy chair with nice music and glass of excellent whiskey, and that’s something I think anyone can appreciate.”