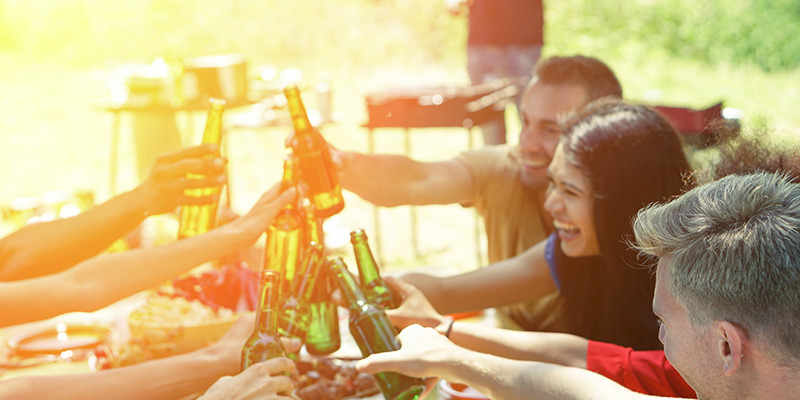 Like going to the beach or trying that experimental new exercise, day drinking always seems like a good idea. But then, you can get sunburned at the beach. Or pull a hammy on a Pilates machine. Or, probably far more often, drink yourself to the point of sloppy late afternoon oblivion. Day drinking is as much science as socializing, and it must be attended to with care—especially if you have any hope of going out later that night.

We won’t go into what may be behind your day-to-night drinking schedule (maybe it’s a Baby Shower, maybe you’re cheersing a new graduate, maybe the power went out and you have to drink all of your beer before it gets warm and gross). Whatever it is that has you drinking in the daylight hours, there are ways to do it with enough moderation that you can actually, realistically socialize that very same night.

Just Say No to Straight Liquor

Hey guys, here’s the easiest and most important rule of all day drinking. Unless you plan on relegating yourself to one snifter, or tumbler, or coffee mug of whiskey—properly sipped on a porch or leather armchair—avoid liquor entirely. Liquor is more than twice as strong as the strongest wines out there, and about five times stronger than even the typical stronger beer, say an 8% IPA (eight times stronger if you’re drinking a 5% pale ale). Drinking straight liquor is gonna take your right into the danger zone, but cocktails can be responsibly consumed as part of day drinking. The only issue here: a lot of us don’t realize how much one cocktail has already impacted us before reaching for another, and another, and then Instagramming our feet because our toes look so cute in these new sandals. Cocktails pack ABV, often in a dangerously refreshing package (Mojito anyone?). Drink water in between (see below), but also keep count of how many times you hit up that pitcher of spiked lemonade, and take at least a 30 minute break between drinks, no matter how summery or locavore.

Sure, half the fun of day drinking is enjoying the daytime. You’re not packed into a dark, crowded room with other night-worshipping social ghouls; you’re free, possibly near a tree or some birds, standing—and imbibing—in the light of day. Except if you get too much sun, you’ll sweat and increase your dehydration level. Think of it this way: what do people imagine when they see an oasis in the desert, a pool of crystal blue water, or a bar with an extended happy hour and $4 well shots? You might be a sun worshipper, but find some shade if you want to make it to sunset and beyond.

A lot of people think drinking water is (or achieves) the opposite of drinking alcohol, namely some pleasant level of intoxication and relaxedness (and often, yes, the illusion of being funnier, sexier, more charming, taller). This isn’t the case. At least not if you’re going for a “pleasant” level of intoxication. If your goal is to pass out at your cousin’s 30th birthday barbecue, by all means avoid water. Just be prepared for some embarrassing pics on Instagram. Water is actually the day drinker’s best friend; it’ allows you to stay on your feet and keeps the level of intoxication manageable, so you can make it to your night activity, and, yes, actually enjoy it. Because the only thing worse than drunkenly slurring your words? Drunkenly slurring your words in the cold hard light of day.

Have A Buddy System Kindergarten teachers weren’t f*cking around. Never forget the power of the buddy system. Since most day drinking is done in groups, it should be easy for you to partner up with a friend, making mutual promises to keep one another in check as imbibing, and intoxication, go on. The major issue here is picking the friend you know isn’t going to forget, or let up on you, if you keep pouring Moscow Mules down your gullet like tomorrow’s Day One of a Trump Presidency. Here’s where you want the lovably annoying friend, the one who eagerly goes to the dentist twice a year and whose house looks like a page from The Container Store catalogue. Vow to keep each other in check when it comes to food, water, and liquor and you’ll have one more defense in your battle to make it through to nightfall socializing.

Shouldn’t have to mention this one, since consuming food is a basic part of human survival. But then again, we’re a crowd that can rationalize a daytime bar crawl; maybe it’s good to be reminded. If water is the day drinker’s best friend, food is the day drinker’s other, slightly envious, best friend. Not only does having food in your stomach help prevent a hangover, but it slows the absorption of booze, meaning you can make it through the next round at the beer garden while your drinks-only buddy finds the nearest bathroom stall to cower in. And then once it’s time for the nighttime party or dinner date, you’re not ravenously scrambling to find greasy food and some Netflix.

If you have plans, like real plans, the night after you’ve been day drinking, you’ll want to cap off all the above with a nap. Fair warning: if you haven’t followed the above rules, chances are you’ll be too intoxicated and do something closer to passing out (and possibly miss a fun night out). But if you’re hydrated, liquor-free, and you’ve had a snack, an hour or so of sleep could help your body regain some of the energy it devoted to losing seven games of cornhole and lifting 16-ounce beer steins all day.