Years from now, historians will look back on this moment, and call it the “Age of the Sommelier.” OK, that’s hyperbolic, but only slightly; the truth is that the U.S. wine scene is totally rocking, thanks to hardworking wine directors, thoughtful importers, and too-cool-for-school somms wearing jeans and sporting tattoo sleeves. Wine is officially dressed-down, but that doesn’t mean it’s any less classy. In fact, there’s never been a better time to dine out and drink well across the country. It used to be that New York, San Francisco, Los Angeles, and a few other cities were the best places to drink—and most likely, the bottle on the table would be a Barolo, Bordeaux, or Burgundy.

Three B’s, move over! Into the limelight, we’ve welcomed appellations like the Loire Valley, Santa Barbara, the Finger Lakes, the Roussillon, Catalonia, the Kamptal—OK, I’ll stop name-dropping. The point is, there are restaurants everywhere showcasing updated wine lists for casual, curious drinkers who are ready to expand their palates. And beyond that, restaurants are taking increasingly unusual and interesting approaches to their wine – creating an adventurous atmosphere to guide you toward new things. Get yourself to one of these amazing places where the juice is flowing, the food is excellent, and the scene is low-key. Hatchet Hall. You’ve probably heard of those guys throwing “wine raves” in L.A. Whether or not that appeals to you, those guys are Adam Vourvolis and Maxwell Leer, and Leer specifically is responsible for one of the most controversial wine lists in town.  Hatchet Hall, which serves updated Southern cooking, opened in July 2015, and right away people were befuddled by the piece of paper presented to them upon sitting down. One LA Weekly reviewer wrote that the list seemed like “some kind of Dadaist wine performance art . . . a thing that’s rife with hashtags and signifiers that mean nothing to anyone but Leer and his brethren.” Here’s the deal: instead of using grapes or regions to organize the list, it is grouped by the sales reps who distribute the wines – which is sort of a silly inter-industry, buddy-buddy way to do it – and very little information is provided about the wines, so you have to ask a somm for advice. Can a list that’s the opposite of approachable be a good thing? You’ll have to try the place to find out. Petit Crenn. At chef Dominique Crenn’s newest restaurant, wine director Courtney Humiston decided to curate the wines in accordance with the philosophy toward the food. Meaning, organic and natural wines to match the organic and natural ingredients – seafood and vegetables only, served family-style, with French flair. Start your night here with a classy bottle of bubbles; all of the Champagnes on the list are “grower Champagnes,” meaning that the winemaker also farms the grapes instead of just purchasing them from a farmer, which is less common in that region. Ribelle. Imagine a wine list with just the bare minimum: sparkling, pink, three whites, and three reds. It gets a lot easier to select a bottle when the options are limited, rather than sprawled across a 15-page tome. That’s the philosophy embraced by Theresa Paopao, the beverage director at chef Tim Maslow’s Italian-inspired Brookline restaurant, which opened in 2013. During staff trainings, Paopao found that using simple flavor notes was an effective way to help waiters learn – so, she figured, why not do the list this way, too? The casual approach ensures that ordering a great bottle will be no-fuss. Café Spiaggia. Here’s a great way to show off your feminist side: bring your date to a restaurant that emphasizes wines made by women. While it’s true that some of the most revered wines around the world are made by women – like the Spanish titan Lopez de Heredia, or 32-year-old Sicilian Arianna Occhipinti, as two great examples – the winemaking profession, and wine industry in general, is largely dominated by men. That’s why sommelier Rachael Lowe made the list at Café Spaggia to feature wines made only by women or husband-and-wife teams. Of course, this would just be a symbolic gesture had Lowe not managed to select a wide array of beautifully made, elegant wines, many of which are under a hundred bucks per bottle. Camerata at Paulie’s. Wine director David Keck is super knowledgeable about grapes, regions, and producers, but what’s more important is that he has made Camerata at Paulie’s a no-fuss place where anybody can walk in and get an exciting, affordable bottle of wine. Keck champions regions like France’s Loire Valley, known for elegant natural and artisanal wine, and avoids wines made in a more jammy and oaky style. The wine list is organized according to how light or heavy wines are, which is incredibly helpful in terms of pairing bottles with a meal; plus, it has helpful little notes throughout, to educate you about your quaff of the night. Additionally, Camerata is a place you can break all the rules about wine – so have a sparkling wine with your main course, and drink rosé in winter. Café Adelaide and the Swizzle Stick Bar. This past spring, under the direction of Dan Davis, the restaurant launched a wine list solely from the Americas. It’s a bold move, since European wine is typically cheaper. But Davis wants to highlight the quality wines from this side of the Atlantic. Beyond the usual suspects of California and Argentina, you’ll even find Central American wine here. Café Adelaide isn’t the first restaurant to take the all-domestic approach; The Dutch in Manhattan made the switch a few years ago. While this might seem like it would reduce variety, what you realize at these restaurants is that there is actually so much diversity within the U.S., or the Americas. Plus, it’s great to support domestic producers. Gaskins. After a decade of working in the New York restaurant world, husband-and-wife team Sarah and Nick Suarez moved Upstate, to the Hudson Valley, to open the restaurant of their dreams, in Germantown. Tastefully furnished with beautiful, dark wood, Gaskins is a welcoming environment that features fresh and seasonal cooking. Sarah does the wines, focusing on smaller-production winemakers – largely from France and Italy – who work organically or biodynamically, and Nick chefs, applying a similar philosophy by carefully selecting top quality area producers. 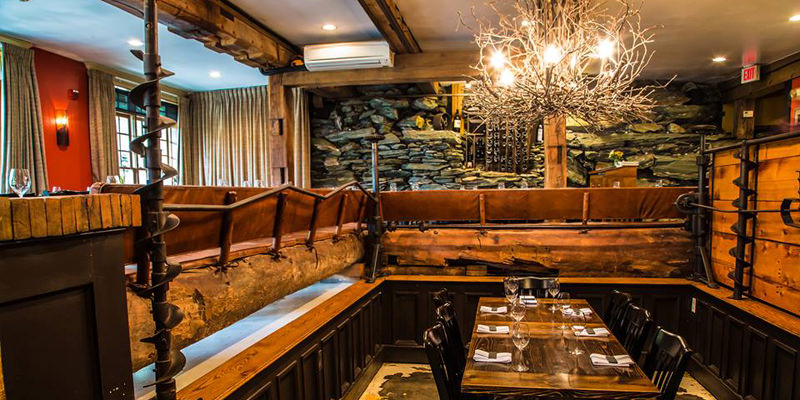 Hen of the Wood. In a former grist mill beside a stream is one of New England’s most interesting restaurants, where chef Eric Warnstedt draws pilgrims from all over the region to try his inspired locally-sourced cuisine (and extensive array of artisanal Vermont cheese), and with a list of international wines and ciders originally curated by William McNeil, and now in the hands of general manager Jeffrey Murray. The lists at both locations (there’s one opened recently in Burlington) features small, family-owned wineries that work organically or naturally, and they are organized by style – ranging from “aromatic and dry whites” to “not so dry whites” to “rich whites and oranges,” and from “delicate reds” to “earthy and rustic reds.” The idea is to give diners an easy, fun way to pick a wine for their palates and to pair with the meal. As the food menu changes through the seasons, the wine list will vary accordingly, too – more lighter options in the summer months.