If you’re new to French wine but interested in Bordeaux and Burgundy, well, that’s wonderful. And god help you. See, exploring Bordeaux and Burgundy (which you’ll almost immediately encounter as “Bordeaux versus Burgundy”) is kind of like approaching the popular tables at some kind of alternative French high school: on one side, the Bordeaux Clique, sleek, preppy-chic, sporting Lacoste polos and sippin’ on Chateau Haut-Brion ‘cuz, yeah, they livin’. At the other table, Burgundian Bohemians, poet-hipsters with dirt in their fingernails, sporting a Johnny Depp kind of weathered cool with maybe, just maybe, a slight chip on their shoulders (don’t worry, they’re journaling through it).

Okay, for today at least, we’re eating our lunch in the bathroom. But we can research, right? Do a little Googling and figure out where to sit tomorrow? Problem is, this is a very old debate between two of the world’s most influential—and distinct—wine regions, with Bordeaux staking the claim for polished, righteous Cabernet-Merlot blends, and Burgundy making the case for finicky but sublime single varietal Pinot Noir and Chardonnay. (Even the regions’ bottle shapes are iconic, with Bordeaux’s high right-angled shoulders and Burgundy’s sloping, cool kid hunch.) No surprise, by now, lots of people have spoken up, and a lot of what you’ll see written about either region leaves basic description behind for something approaching mythic meta-commentary. A piece in The Guardian called Bordeaux “cerebral: the algebra, the musical theory, the astrophysics and the essay.” And Burgundy, well, that’s the “scintillating flare of emotion and pure being that eclipses thought like the sound of an operatic aria or the sight of the northern lights.”

We’re all for beautifully written verbal flights of fancy, but those of us newer to these great French wine regions might be intimidated out of approaching either. And in a way, it could be easy to “avoid” Bordeaux and Burgundy and still live a relatively fulfilled wine life. The wine world has opened up like K-Mart on Black Friday, and it’s both hyper-global and adamantly “local,” with decent to above average wines increasingly accessible. A polished, high-octane Bordeaux or preciously nuanced Burgundy may never need to enter into your wine drinking experience. And that would be a damn shame. Because as multifaceted and beautifully variegated as the wine world is, Bordeaux and Burgundy represent two of the greatest, most exquisite, perpetually parallel (as in never intersecting) wine traditions in all of alcoholic grape juice history. 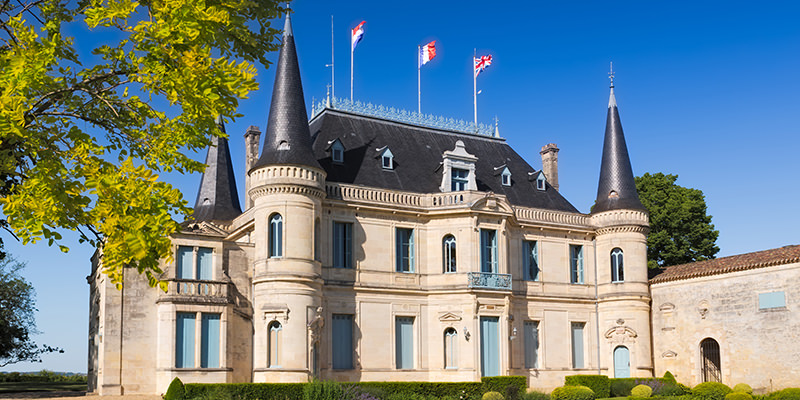 Which is why, like writing a haiku on berets, we’ve done our best at breaking down, rapid fire, some intimidating stuff the French have been doing right for a really, really long time:

Bordeaux is like “old money,” a wine region founded by the Romans with a focal point port city and old school access to trading, wine distribution, and growth (the Brits still call Bordeaux “claret” because they fell in love with it, and have been sucking it down, for centuries). Burgundy, on the other hand, is land-locked up in France’s northeastern region, and much smaller, about 74,000 acres of vineyards to Bordeaux’s roughly 300,000. Bordeaux has its famous Left and Right Banks, and five “growth” classifications (the “First Growths” are Chateaux that even lifelong teetotalers probably know by name—we’re talking multiple Rothschilds, Chateaux Margaux, etc.), whereas Burgundy has its Grand and Premier Cru and Villages designations, smaller family-owned operations that make up the region’s almost frustrating, dizzying patchwork of vineyards—about 100 different appellations. (Burgundy also connotatively includes Chablis and Beaujolais, but each region has a distinctive style that separates it.)

As for output—which, let’s face it, is what we’re all here for—Bordeaux is like the Whole Foods to Burgundy’s local CSA, producing four times as much annually (both regions produce both red and white wines, though both are most famous for their reds). As for the wines themselves, well, to simplify to the point of being in danger of some likely well-deserved French retaliation: Bordeaux is blend. Blend is Bordeaux. And blend is Cabernet Sauvignon and Merlot (that may be a short poem). Burgundy is single varietal terroir, aka Pinot Noir (poem number two). Bordeaux wines can actually contain a variety of grapes, including Cabernet Sauvignon, Merlot, Malbec, Cab Franc, and Petit Verdot, but the bare minimum of any great (or decent, moderately priced) Bordeaux is Cabernet Sauvignon and Merlot, with tannic structure underlying the fruit, which makes it so age-worthy (and sometimes, cost-prohibitively so).

Burgundy, on the other hand, is the ancient, monk-fostered home of spiritual terroir, the land of single grape expression in a single plot of land (the grapes being Pinot Noir, which Burgundy made famous, and Chardonnay), cultivated on a far smaller scale and often blended by negociants or else small self-operated wine cooperatives. See the difference? With two dominant grapes, that have two different ripening seasons, Bordeaux can provide some consistency, and ascend to polished greatness, whereas Burgundy’s variously more acidic, minerally, and/or lighter Pinot Noir is finicky, nuanced, delightfully unpredictable like a Manic Pixie Dreamgirl.

And then of course, there’s the balance of power, which has begun to shift from Bordeaux to Burgundy for a few reasons, in part, because nowadays Bordeaux seems a bit like the villain in an 80s movie—sleek, formerly popular, now suddenly challenged by the scrappy, quirky kid (Burgundy). And a couple of things might help to support that idea, including heavy foreign investment into Bordeaux (vs. more family-owned Burgundy), the renewed interest in origin/place-specific identity, and of course Bordeaux’s long period of dominance (let’s admit it, everyone’s always a bit happy when the Patriots lose). But Bordeaux doesn’t really deserve that reputation. It’s just a different kind of winemaking, an incredibly effective one, whereas Burgundy is more of a sweet, sublime surrender to terroir. And, dammit, don’t we have room in our hearts for both? The answer, as long as tannin-loving steak and the unpredictable tendencies of palate and wine market survive, is yes. But there’s also the looming threat of price. Bordeaux was so popular, the best stuff became incredibly expensive, the darling of a newly thirsty Asian wine market. And it looks like Burgundy might be headed toward the same fate. In the age of terroir, authenticity, and just damn cool neck scarves, the reluctantly hip wine region is ascending (taking up 4 out of 5 top 5 spots on the world’s top 50 most expensive wines)—meaning it’s also opening itself up to foreign investment and some potentially alienating commercialization (it’s like when Dylan went electric, man). The question is, should you care? Yes. Even though alternative French high school taught us caring isn’t cool. These are pillar regions of winemaking. If you like wine, any wine, then yes.