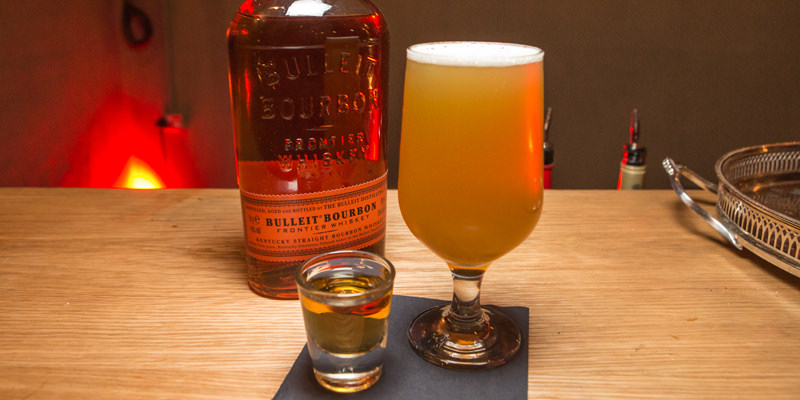 Chances are high that at some point in time, you’ve come across a boilermaker, the classic drink that is a favorite among bartenders and has become just as popular at high-end cocktail bars as it is at local dives. The drink, on its surface, is pretty simple; it’s a basic pairing of a cold beer with a shot of whiskey, but there is actually more complexity to it than you might realize, and it all begins with how the drink originated in the first place.

Stories are murky at best as to how the boilermaker first came into existence, but it’s pretty clear that the drink was originally consumed by blue collar workers at the end of a long shift – which is why it’s now become the shift drink of choice among bartenders. It’s believed the drink takes its name from the workers who built and maintained steam locomotives in the 1800s. These workers were known to head to the bar at the end of the shift, and a shot of whiskey with a beer became a staple for quickly easing the pain that came from a hard day of back-breaking labor. As it was the drink consumed by boilermakers, it took on the name as well.

But that’s not the only story of how the boilermaker came to find its name. Another tale tells of Richard Trevitchik of Cornwall, England, who, it is said, was testing his design for a steam powered vehicle on Christmas Eve 1801. When his vehicle successfully climbed the village’s steepest hill, he went out with some friends for whiskey and beer to celebrate. But before heading to the pub, he forgot to douse the fire inside the machine’s boiler, and when he returned, a little tipsy, the vehicle had been reduced to ashes. They blamed it on the shot and beer combo Richard was drinking and the boilermaker was born.

But these stories aside, there’s an even larger debate concerning how the boilermaker is supposed to be consumed. While the shot and beer combo might seem straightforward, there are actually several different methods for drinking it, and each one is readily accepted as the best way by those who do it – the only thing that most people agree on is that the shot must be whiskey.

The first method is your most basic, and the purists would have you believe it’s the classic: you drink the entire shot and then chase it with the beer. It’s that simple. However, as more high-end cocktail bars have also embraced the boilermaker, and thought more about the pairing of whiskey and beer, drinkers have taken to going back and forth between the two drinks, taking a sip of the shot and then a gulp of the beer, until each drink is finished.

But the most exciting way to drink a boilermaker has to be how it often goes down in London – a practice that is gaining popularity in the States as well – dropping the shot directly into the beer. A modification of this is pouring the shot into a beer can or bottle. Fans of this method say it’s the best way to see how the beer and whiskey interplay. Plus, who doesn’t love the sound of a shot glass full of whiskey dunking into a cold glass of beer?