Great marketing, ease of growth, ability to please one’s palate – these could all be reasons for calling a grape “noble” and yet only six grapes attain this label. Are the grapes that hold the label of being noble really that much better than all the other grapes available in the world, or were they simply at the right place at the right time in order to cause the wine drinking public to fall in love?

At some point in all of our wine drinking experience we’ve had at least some contact with wines made from one of these six grapes: Cabernet Sauvignon, Merlot, Pinot Noir, Chardonnay, Riesling and Sauvignon Blanc – the Noble Grapes. If you want a great tutorial on each Noble Grape, head over to our Wine 101 section. 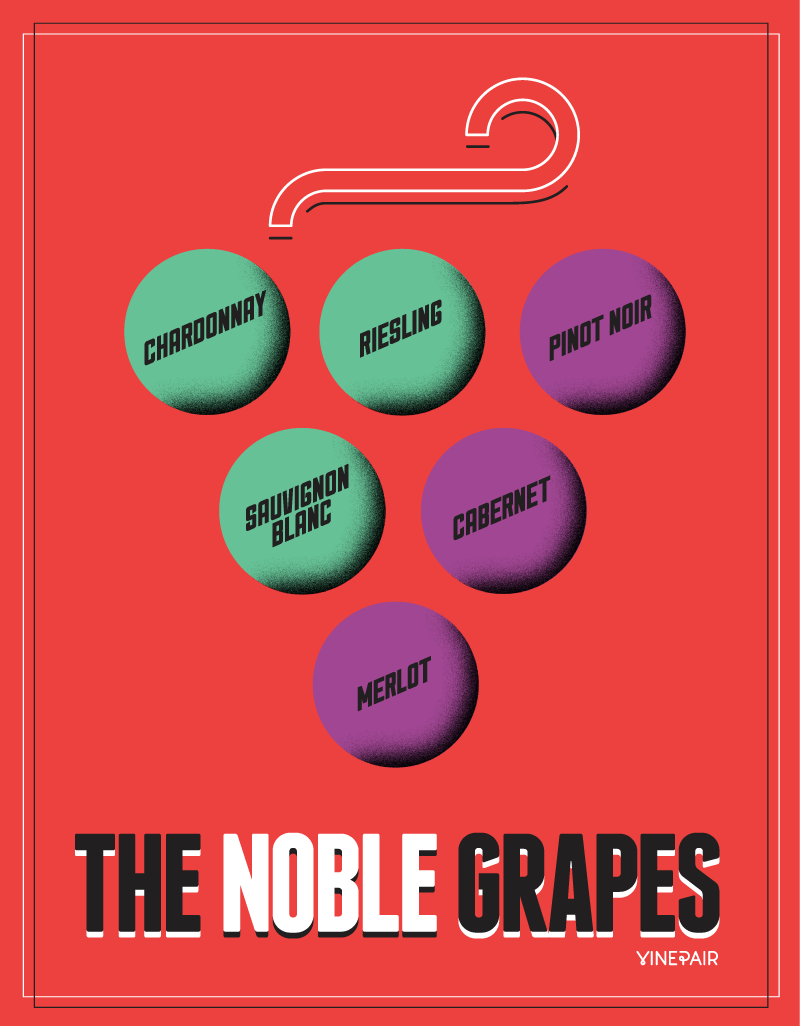 We can’t deny the Noble Grapes are more prolific than others available to us in the wine world, but why? For a few, such as Merlot, Cabernet, Sauvignon Blanc and Chardonnay, the grapes grow relatively easily in a variety of climates and soils. Their ease of growth, and therefore their ability to help colonize the wine world, could be why, historically, we label them as noble, as their proliferation across the world is reminiscent of real nobility’s conquests of far off lands. But ease of growth isn’t the case for fickle wines like Pinot Noir, known to winemakers as the heartbreak grape because of how tough it is to grow, or Riesling, which requires a specific climate to create a special wine.

Since we can’t grow all of these grapes well all over the world – even though people try – why are they, above all others, noble? Because these grapes are the gateway drugs. They are most people’s first taste of what it means to fall in love with wine. They are our first love. And for a large part of that, we have the French to thank.

Out of these six grapes, five originate in France, and the sixth, though born in Germany – Riesling – also found success in the Alsace region of the country. Ever the astute marketers when it comes to their indigenous products, the French have a way with causing us to fall in love with the things they create. And in the case of wine, they are keen salesmen. As the wine trade developed centuries ago, the French strategically exported their best commodity: luxury. While many other colonial powers also had extravagant courts, none were as famed as those of the French. Louis XIV became known for his lavish parties and decadent lifestyle and as word of this opulence spread, many others wanted a part of it. With that reputation for extravagance came a desire for all it came with: the clothes, the jewels and of course, the wine.

Once other countries had a taste for French wine, they wanted to produce it themselves, and many of France’s greatest winemakers were happy to oblige, traveling around the world planting their indigenous vines in countries across the globe. The French became consulting winemakers, aiding winemakers from other regions in their efforts to grow France’s indigenous grapes, and in doing so, they hooked an entire world on the grapes of France.

The Noble Grapes are like old friends. As America’s wine culture evolves and expands, we may now find ourselves seeking new wine flavors and experiences but no matter what other wines we happen to fall in love with, we can always come back to them, and when made by discerning winemakers, they rarely disappoint.