There’s no denying it: drinking and beaching were made for each other. Luckily, America is a country that’s large enough to include a few coasts and beaches a’plenty. With the days heating up by the hour, sipping something cool and alcoholic is ideal. Think all the beachside dives are in California? Think again. We searched the country for thirteen beach bars that vary in vibe, price, and location. Don a pair of aviators (really, do it), flip-flops, and get ready for a booze cruise down the nation. This fishing lodge and accompanying spa and bar is located in Alaska. Yes, Alaska. Talon is the only open air bar in Alaska, and it serves up ultra fresh fish, superb wine, and of course, beautiful views (who remembers The Proposal)? 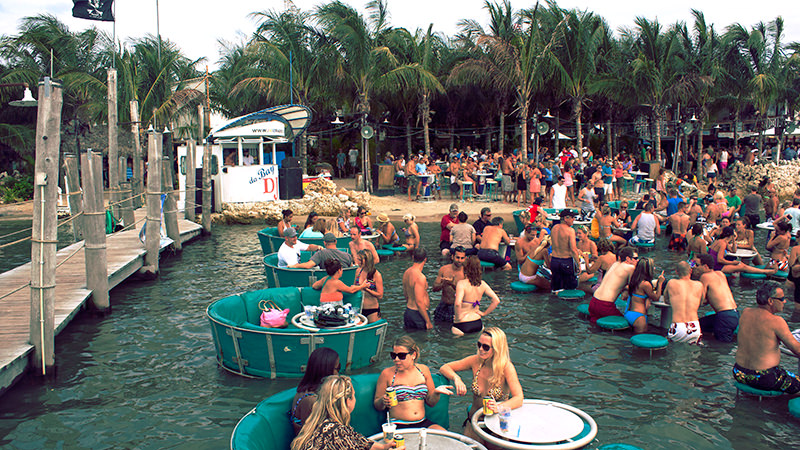 Yeah, this place isn’t exactly known for being super classy, but you can sit and drink in the water without fear of spilling your drink. Look at that!

Dine on crab cakes and duck spring rolls at this stunning Malibu bar and restaurant that’s firmly planted in the sand. Gaze at the ocean, enjoy their great by-the-glass program, or treat yourself to some sake (told you it’s a California thing). Sure, that serene cabana picture makes this Miami hotspot look tame, but don’t be fooled. Get clubby and order extreme bottle service at this Miami staple. Come on, you’re in Miami, you have to flaunt. Only a cool five minutes away from the general beach area, this extremely non-pretentious bar is only open during the summer (because New York beaches freeze over and shatter). Do yourself a favor and order the best frozen vodka pink lemonade and piña colada ever known to mankind. Just ask for a “frozen.” Speaking of New York, how much do we love The Surf Lodge in Montauk? Escape to this little hotel with your special someone, then sip and dine by the water in the Lodge’s casual-beach-meets-haute-cuisine restaurant.

9. The Serenity Pool At The Four Seasons In Maui, HI The Four Seasons Hotel is not known for skimping out, and they’ve stopped at no expense to give you an experience that’s supremely relaxing. As someone Evian spritzes you and lays cucumbers on your eyelids (for real), swim up to the bar and enjoy cocktails. Yes, you’re on Maui beach, but you could always still use a pool. And safety first: sunscreen and aloe gel is on the house. Do you have kids? Then you should go here, because kids eat free. Also, views of the water in Panama City, Florida, all sorts of oyster dishes, and live music are available. Smack on the pier in Redondo Beach, California, Old Tony’s has unabashedly non-martini martinis and dessert-packed cocktails like the Fire Chief (so much rum) and the Lifesaver (rum, butterscotch schnapps, and pineapple juice). Do not drink unattended. Located on the Florida/Alabama line (turns out they’re right next to each other!), Flora-Bama is best known for their annual Mullet Toss Party, which is a huge beach party but also a literal mullet toss. You toss a “dead mullet” over the state line and see who can throw it the farthest. We’re scared, but intrigued.

13. The Beachcomber In Wellfleet, MA So, this Massachusetts bar claims to have sold over 3 million of their house cocktail: the Goombay Smash. It consist of rums, juices, and a Myer’s float. We suspect there’s another secret ingredient that keeps the customers coming back. The views are also lovely.