OK, so we’re all getting a little tired of lists. The Internet’s shamelessly overflowing with them. “The 11 Hottest Congressmen of All Time.” “17 Ways to Tell If Your Cat is Cheating on You.” It’s getting, well, it’s getting weird.

But if there’s one topic deserving of the importance of online ranking, it’s food. Better if it’s fried food. And better still if it’s fried food you can consume while also consuming alcohol. Hence, our bold endeavor to rank the best fried bar snacks of all time.

Now these may seem generic, but bear in mind, from bar to bar, “unique” snacks vary, wildly. One bar’s octopus hush puppies (that’s a thing) might be another bar’s deep fried parsnips (that’s also a thing). But there are certain bar snacks that seem to have emerged out of the fried masses to assert themselves as classics, showing up on bar menus to the delight of drunken patrons the world over. Just why fried foods work so well shouldn’t be much of a mystery—the crunch, salt, and warmth of the fried snack is the perfect thing to casually introduce to your palate between sips of a cold beer (or wine, or Appletini). Not to mention that they tend to keep you on your feet.

And yes, we were so bold as to rank them. Opinions will vary. This is a sensitive subject, we knew that going in. But whatever your feelings on the rankings themselves, just remember, if you find yourself with a pint in one hand and any one of these fried delights in the other, it’s been a good day.

That said, here is the correct ordering, “best” to “most best”: 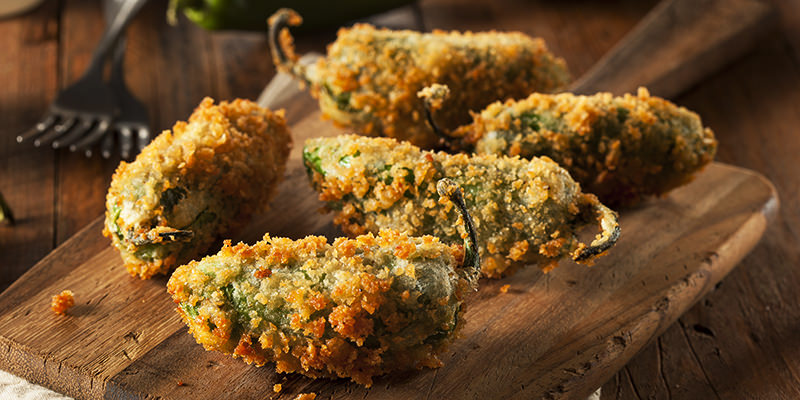 OK, haters, pork rinds might look—and sound—kind of strange. More graphically named, certainly, than most of our snack foods (if they called mozzarella sticks “fried dairy logs,” would you eat as many?). But pork rinds are delicious, crispy, surprisingly light, a revelation when sprinkled with chili powder and a spritz of lime. Of course, if you can get your hands on their hunkier older brother, chicharrones (twice-fried pork skin, sometimes with some belly thrown in there) clearly, go for those. 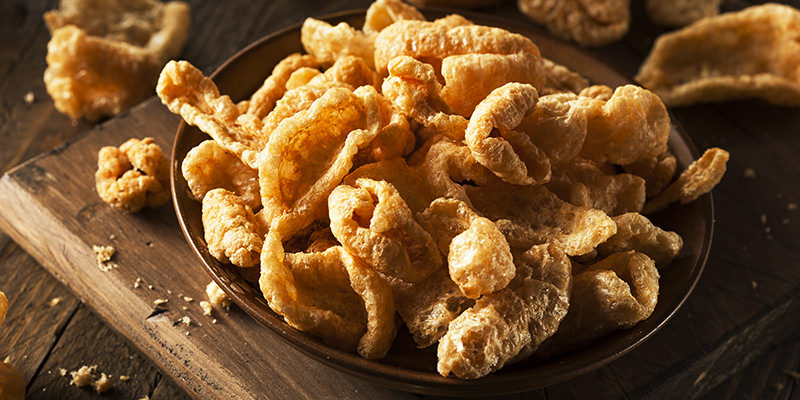 Hush puppies aren’t on every bar menu, but they should be (they’re deep fried and ball-shaped; they’re over-qualified bar food). Crunchy orbs of cornmeal batter, so you can kind of pretend like you’re getting a vegetable serving in while dipping said vegetable serving in some chipotle aioli or whatever awesome flavor the bar has used to disguise mayonnaise that night. Who says chicken fingers have to be relegated to a life of infamy and coloring outside the lines on the kids menu? Don’t let every chain restaurant in America convince you that eating chicken fingers is anything but a noble, and highly adult, thing to do. Especially if you’re two beers in. A great bar snack because they provide much needed protein, and tend to come alongside an array of dipping sauces. And, let’s be real here, it’s all about the dipping sauce, right? “French fries” aren’t a bar food. Not really. They’re a fast food “side,” something you get with your drive-thru quarter-pounder and eat on the ride home to keep from going insane. Oh, and they’re also a delicious vehicle for delicious ketchup. But bar food—they ain’t. Poutine, on the other hand, is a bar food—just ask any tipsy Montrealer—featuring French fried potatoes, gravy, and cheese curds. Possibly a whole lot of other stuff, but those are the basics. Not a “crispy” fried food, but soggy for the only good reason a thing should be soggy: because it was drenched in gravy. Maybe no surprise fried cheese is finding its way onto the list twice, but then, it’s fried and it’s cheese. Another ingenious move—never would we sit down and eat that many pieces of uncooked mozzarella casually. But deep fry it, and the whole thing becomes a casually naughty flirtation with mass quantities of hot dairy. 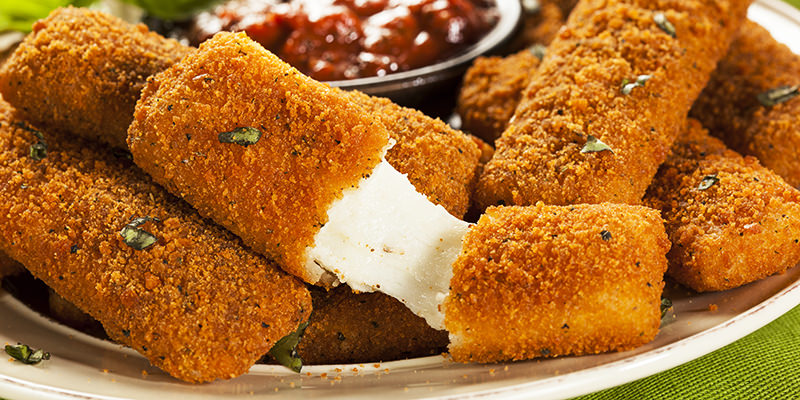 For some reason, these only became a “thing” recently, and we’d have preferred knowing about them basically as soon as we could gum solid foods. Something about the crunchy/sour/sweetness of the pickle chip wrapped up in a blanket of “fried” just hits all the right buttons. Very poppable, maybe even moreso than a cheese-stuffed jalapeño. 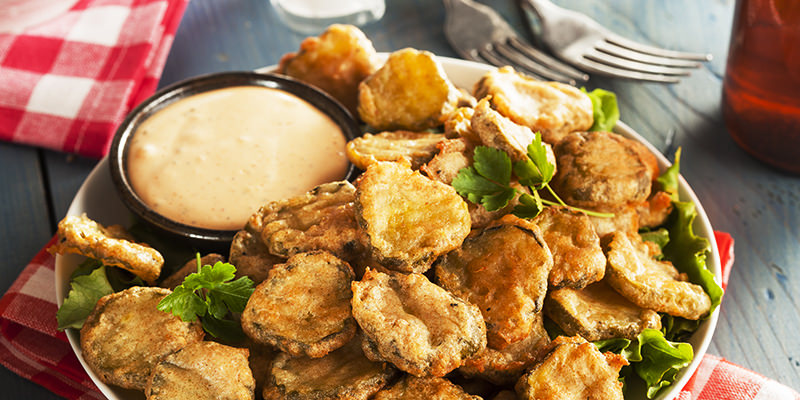 We’re not sure how, but these squat little nuggets of soft fried potato somehow found their way from the elementary school lunch menu to bars everywhere. And before any debate erupts, no, French fries still aren’t a bar food. For some reason, they never made the leap from the Happy Meal. But squish up that potato into many tiny cylinders, deep fry them, and you’ve got a legit—and mildly nostalgic—snack to go with your mildly (intoxicated) nostalgic bar talk. 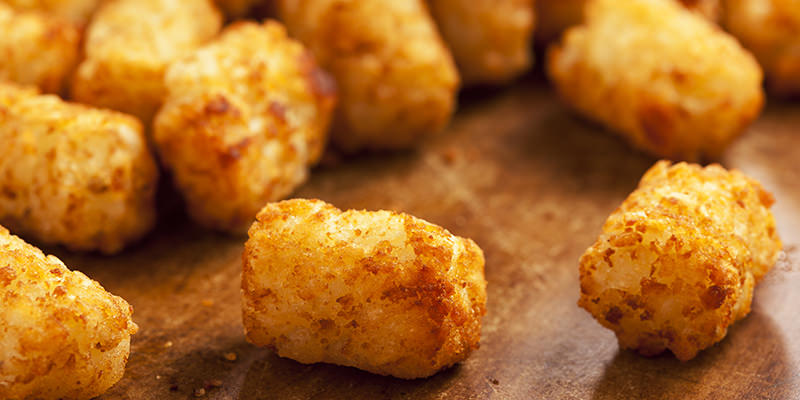 The younger step-cousin of the fried pickle, with a bit more of a briny bite. Tiny little orbs of crunchy, juicy, salty goodness. We’ve seen both black and green fried olives, though for some reason the green seem like just the right thing to cut through your next beer. Bonus points for being so small for so much flavor, making these the perfect fried bar snack for nervous/anxious eaters. The scale of onion ring deliciousness goes from “incredible/life changing/why don’t I eat these at every meal” to “horrible/slippery/I’m gonna make some serious changes in my life” terrible. A few factors contribute: crunch (and the amount of breading), onion texture (we’ve all stared in horror as we chewed the crunchy coating, only to see the still-attached limp sliver of onion dangling in front of us, mockingly), and temperature (a cold onion ring is to be entirely avoided, unless it’s leftovers and you’re hungover). That said, once those factors are lined up right, it’s crispy, oniony magic. Some people may not consider Buffalo wings a snack, but a.) those people are sissies and b.) have you ever sat down to a heaping plate of dinnertime Buffalo wings? No, none of us have, and that’s because we’ve cleverly rationalized categorizing a deep fried protein for “incidental eating.” And there is no better incidental eating then eating done at a bar, where twenty-five cent wing specials turn chicken consumption into a sport. (The sport of kings.)