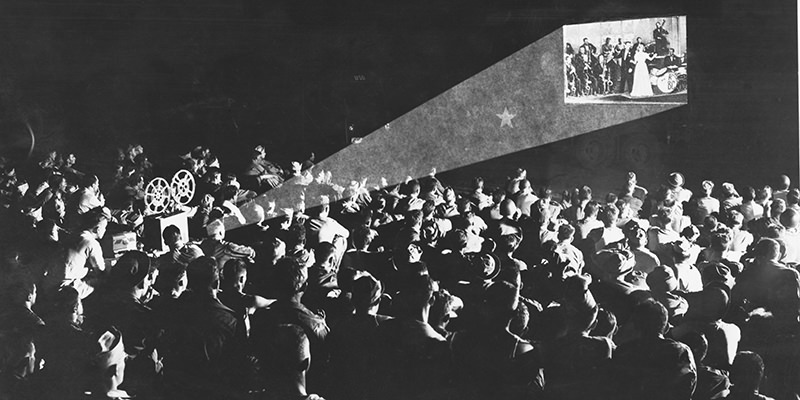 Good for TV, but movies are still happening, mostly because Vin Diesel is an unstoppable force, and nobody’s figured out that Brad Pitt has had little to offer since Twelve Monkeys. (OK, Moneyball was pretty solid.) And then there’s the fifteenth installment of Paranormal Activity, where the demon eats peanut butter with his demon finger, unapologetically. And, yes, leaves many cabinet doors open. What a jerk.

But before you book your ticket for the remake of whatever decent film they’re going to corrupt into Taylor Swift’s acting debut, here’s a way to guarantee your movie-going experience is still pretty rewarding: smuggle in some booze. Sure, sometimes, as in a Charlie Kaufman movie, movies are worth watching entirely sober—otherwise you may miss out on the mind trip that is a Charlie Kaufman movie. But if you’re just looking to make the second mandatory viewing of Alvin and the Chipmunks: The Road Chip a bit less adorably terrifying, you must go the way of smuggling. (And we don’t mean cheaper candy. Though, damn, do that too. Nobody should be paying $4.95 for Sour Patch Kids.)

Of course, god willing, all upcoming movies star Nicolas Cage and/or a rebooted Katherine Heigl. Failing that, we’ll take The Revenant (Tom Hardy AND Leo? Old timey frontiersman betrayal drama? Yes please) or Sisters, because Tina Fey and Amy Poehler could make a movie about proper flossing techniques and we’d watch and love it. Either way, if you wanna go in with a bit of boozy back up, here are a few ways how…

The Massive Purse Method:  Chicks, you win here. And it’s about damn time a lifetime of lugging around massive bags paid off in a fun way. Bottles of wine (with screwcaps, ideally) and even little plastic cups will fit inside. In fact, you could probably fit a spirit and a few mixers in there.

The Soda Bottle: Guys, we all know and respect the movie theater rules. No smuggling in food or drink from outside, because of course it’s reasonable to charge $5.75 for a “small” 32-ounce soda. (Twenty-five cents more and you can drink a full 64-ounces of Coke Zero.) But IN the rare event you decide to break the rules, you can pre-mix a nice rum and coke and stuff that thing either into a purse or inside a poofy jacket.

The Flask: A flask is always a good option for sneaking booze into entertainment venues (except for sports arenas, they’re about one step away from full-body cavity searches). Tuck a flask of some nice bourbon or rye whiskey into the interior jacket pocket and enjoy the gentle buzz as you endure yet another rom com. (Then again, anything with Rebel Wilson is going to be a bit dope.)

The Medication: OK, this one is extremely unethical and makes us feel a BIT gross even suggesting it. But a bottle of medication is an easy way to store a secret shot. If you’re really feeling ill, or going to any movie starring Ashton Kutcher, clearly, you’ll need an extra shot or two.

The Wellies: According to VickyFlipFlopTravels—a name you can trust—you can actually pack mini bottles (of hooch, or maybe some nice Cabbie Sauv?) in a pair of big Wellies. Only problem here, if it’s not raining, you might get some looks. On the other hand, as Vicky testifies, people are way less likely to search your boots.

The Sunscreen: Apparently a company makes a special sunscreen flask, typically for use at the beach (and who doesn’t want to get drunk before taking on the mighty power of the ocean and sharks?). But fill this with the liquor of your choice, and hope people don’t think it’s weird when you’re drinking sunscreen during a movie.

The Tampon: Yup, this is a thing. Not sure we should quite recommend it, because if you’re smuggling at this level, it might be time for some reassessments. That said, they apparently “look like the real thing!” and can be filled with an ounce of your choice of booze. Just, ladies, since they look so realistic, don’t mistake these for actual tampons. Would make for a weird, weird night. Like the time I saw one of those Pirates of the Caribbean movies after having consumed some….oregano.

Either way, bring the right booze, and it’s two thumbs up! Or attempted thumbs up! Because you are drunk now.*

*If you do go to the movies and get intoxicated, take a cab or Uber home. No drunk driving. Plus that way, you can regale the cab driver with your opinions on Helen Mirren’s unapologetically overt sexual energy.