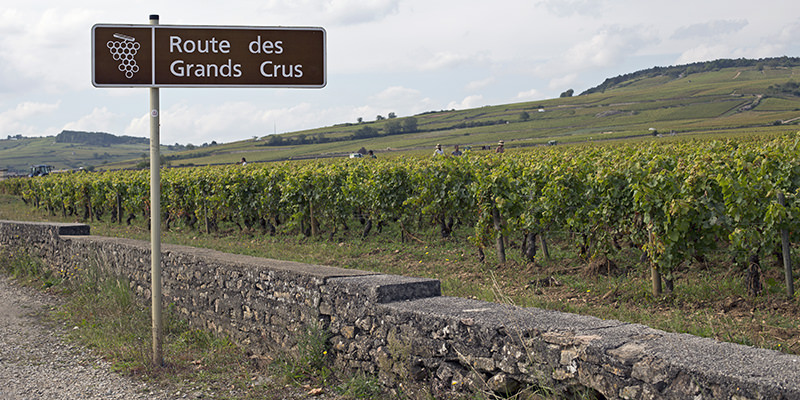 Most of us can’t afford most of the wine from Burgundy that’s out there. So yeah, it’s hard to know a ton about it. At least, “know” about it with our mouths. But there’s some talk Burgundy wine prices are starting to level out (see below). And really not all Burgundy is insanely expensive (also see below).

Meaning it might be an opportune time to bone up on our Burgundy wine knowledge, and not just to drop terms like Grand Cru and “Kimmeridgian.” It’s a terroir-based, varietal-driven kind of wine region; learn about Burgundy, and you’ll learn about the fundamentals of winemaking. Also wine pricing. Also one of the O.G. sources of wine nerdism the world over.

Chardonnay isn’t the only white grape in Burgundy.

It may be the most famous, but Burgundy vineyards can—and do—also grow lesser known Aligote, which tends to miss out on access to the most coveted terroir but does produce a nice, light, younger white wine.

Pinot Noir isn’t the only red grape in Burgundy.

Noticing a slight pattern? Yes Pinot Noir dominates Burgundian reds (anything that says “Red Burgundy” has to be Pinot Noir), but there’s also Gamay, and even a wine called Bourgogne Passe-Tout-Grains which can have Pinot Noir, Gamay, Pinot Blanc, Pinot Gris, and Chardonnay in the blend.

Pinot Noir and Chardonnay dominate the Burgundy vineyards, but the region also produces Crémant de Bourgogne (hooray, sparkling!) and tiny amount of rosé. Despite the commercial sex appeal of Burgundy, the region produces almost twice as much white wine as red.

Yeah, it takes up four out of five spots of the World’s 50 Most Expensive Wines, but there are still affordable, decent Burgundies. In fact, Grand Cru vineyards—the most expensive Burgundies, based on terroir—make up only 2% of the Burgundy wine region.

It’s not just kicking ass in the “most expensive wines” department. Burgundy outsold Bordeaux to the tune of 9% in 2014 (41% to 32%). Prices for Bordeaux have rebounded recently, and Burgundy’s rise seems to have found its plateau.

There is not one encompassing Burgundian terroir.

Burgundy is basically a patchwork of vineyards, with about 100 different appellations—not just to confuse us, either. Terroir, in the sense of the soil yes but also the human impact, is a paramount factor in the character of a Burgundy wine. And it can vary from vineyard to vineyard, even vineyards as close as five minutes apart. Climats are specific plots of land characterized by specific geological and climatic qualities.

Part of what makes Burgundy’s terroir so special: it’s an ancient sealife graveyard.

Many millions of years ago, the Burgundy region was actually covered in a shallow sea, and in that sea lived millions of creatures with hard, calcium-rich shells. Fast forward to the disappearance of said sea, add in a dash of fossilization, and you get the region’s limestone marl terroir.

Part of what makes Burgundy so special: monks.

Monks have a lot of history in the production of delicious fermented beverages, so maybe it shouldn’t surprise us that both the Cistercian and Cluniac Orders were responsible for learning how to cultivate the finicky Pinot Noir grape starting around 1000 years ago. Fortunately, they meticulously documented their progress, so not only have methods been passed down, but the concept of “terroir” (which they basically originated) has stayed in rotation.

For a region that’s so incredibly well known, Burgundy produces a surprisingly tiny amount of wine: about 3% of France’s overall wine production.

Burgundians aren’t afraid to mix stuff into their wine.

To be fair, they’re usually mixing stuff—like crème de cassis—into the lighter, cheaper Aligote wine. That’s how the Kir cocktail was invented, named after priest, Dijon Mayor, and WWII resistance hero Félix Kir. If you haven’t tried a Kir, you should; they’re actually quite delicious. (If you’re in the mood for bubbles, just opt for the Kir Royale. Kind of like the Royale with Cheese, but booze.)