My first real experience with Sherry, the fortified Spanish wine beloved by British grandmas and hipster somms alike, was fittingly at Sherryfest in New York. These many iterations of Sherry were vast and varying, from light and salty to thick and syrupy. How could so much variety fall under one category?

I asked a friend to explain this strange new world to me over a glass at Terroir in Manhattan. The explanation took a full hour, and I still wasn’t quite sure if I understood the differences between Manzanilla and Fino and Palo Cortado (oh my!), but I did understand one thing: In any form, Sherry is delicious. And though I’ve tried many more Sherry wines since that day, nothing quite hits the spot like the Bodegas Grant “La Garrocha” Amontillado. 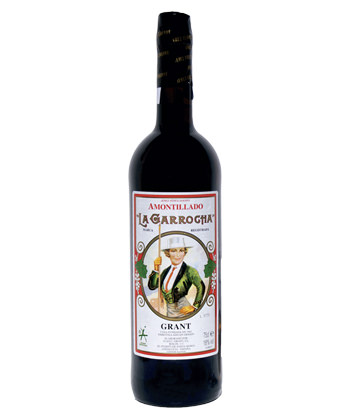 Produced in the area around the three towns of Jerez de la Frontera, El Puerto de Santa María, and Sanlúcar de Barrameda in southwestern Spain, Sherry can be dry or sweet, but it is always fortified and typically made from the Palomino grape. From there, things get a bit complicated.

Sherry is defined by its aging process, the variations of which create its different styles. While aging in the complex solera system, in which younger lots of wine are blended into older ones over many years, wines will either be aged biologically, protected by a film of yeast called flor, or oxidatively, without flor. Biological Sherries, like Fino and Manzanilla, will have fresh citrus and saline aromas, while oxidative ones like Oloroso will have richer, nuttier characteristics. Amontillado straddles both spectrums. While it starts its life as Fino, the flor disappears as aging progresses, exposing the Sherry to oxygen and darkening both color and flavor.

While Bodegas Grant, one of only three family-owned bodegas in the region, was established in 1841, it has only been bottling its own wine since 2011. The “La Garrocha” Amontillado, named after a traditional Andalusian dance, spends nine years aging in the solera system and perfectly embodies what it is to be an Amontillado. Though heady with roasted nut aromas, it’s snappy with citrus and sea salt, orange peel cutting through caramel and brown sugar. The juxtaposition of mouth-coating texture and brightening acidity gives the sensation of comfort yet refreshment, simultaneously relaxing and awakening the palate. It’s the kind of Sherry that makes you want to explore more — and trust me, when it comes to Sherry, there’s plenty to investigate.