“As a hop-forward brewery, we can take the IPA and build it into different environments and times of year,” Gabriel Magliaro, a co-founder of Half Acre Beer Company in Chicago, says. The brewery complements its year-round IPAs, including the moderately bitter and fruity Bodem and Hallow double IPA, with seasonal releases such as the crisp and dank Vallejo, slated for spring and summer. This October, Half Acre added the winter IPA Tend that “speaks to that time of year and of feeling cold,” Magliaro says.

Half Acre underlines its chilly viewpoint with a stark and striking label — a glowing-red fire’s smoke bathing a darkened forest — and a robust recipe redolent of caramel. Simcoe hops lend resinous qualities reminiscent of Christmas trees, or maybe a contemplative hike through a snowy forest. “Pine-driven hops send your mind to a place where it all connects,” Magliaro says.

No matter the month, IPAs are never out of season. But come winter, IPAs can get the cold shoulder for spiced holiday ales and imperial stouts. As a counterpoint, breweries are releasing heartier IPAs suited for sipping during a snowstorm or dreams of one. A winter IPA will “keep you warm,” says Kyle Wilson, the brewing projects director for Brooklyn Brewery, which released its new Winter IPA this fall. The crimson beer features rye that lends assertive spiciness without going overboard. “If you’re in a warm climate, it will still be palatable and might call to mind romantic wintry seasonal associations,” Wilson says.

Follow the historical tracks in the snow, and you’ll discover this trend traces to 1981 when Sierra Nevada released Celebration, layering just-harvested and dried hops — Centennial, Chinook, and Cascade currently star — atop a caramel platform. Its profile of pine and citrus, the bitterness persistent but not pummeling, set the winter IPA template, in spirit if not name. (Sierra Nevada didn’t label Celebration as such until 2014; refreshed artwork called the beer a “fresh hop IPA.”)

Celebration casts a cultish shadow. “That’s every brewer’s favorite beer,” says Mat Johnson, the head of brewing and quality management at Five Boroughs Brewing Co. in Brooklyn. “Every year that comes out, we’re hunting it down.”

Johnson previously worked at pFriem Family Brewers in Hood River, Ore., where the brewery created the hop-centered Winter Ale reminiscent of spruce trees and fruitcake. Upon arriving at Five Boroughs in 2020, one of his first tasks was overhauling a winter IPA recipe. “I had, like, three days to put it together,” Johnson says.

Creating a carbon copy is no cause for celebration. Instead, he built an oat-smoothed IPA featuring both caramel and dark-roasted malt, tropical and piney hops, and the brewery’s house yeast strain for hazy ales. Last year’s release soon sold out, and “it’s selling even quicker this time,” Johnson says.

A cloudy approach to IPAs can help communicate the season. Fresh snow is white and fluffy. And nearly a decade ago, an era before hazy IPAs blew up, the wheat-driven white IPA was having a small moment. In 2013, New Belgium released the white IPA Accumulation, tapping into the tiny trend. “The winter IPA feels a bit like a zig while others are zagging,” says Andrew Emerton, the senior brand manager at New Belgium.

Focusing on the season can give winter IPAs a lengthier lifespan than traditional holiday beers. The spell of spiced Christmas beers is often snapped on Dec. 26. “Once that season’s over, it’s over,” says John Trogner, a founder of Tröegs Independent Brewing in Hershey, Pa.

In 2014, Tröegs launched the quarterly Hop Cycle series that has rotated over the years, save for one constant: Blizzard of Hops, a winter IPA evocative of citrus and spruce tips, loaded with enlivening bitterness. “People’s taste buds tend to deaden down and you tend to eat richer and fattier foods,” Trogner says. “There’s a need for bitterness, in my mind, to balance out that from the beer side.”

Full Sail in Hood River is also leaning into a seasonal IPA program, shifting the marketing and recipe for its long-running Wreck the Halls. The IPA-winter-warmer hybrid once featured a festive wreath-filled label, sold as a “hoppy holiday ale.” Wreck is now part of the brewery’s Strong Current series of seasonal double IPAs; the beer’s alcohol content boosted to 8.5 percent, the 16-ounce can’s label featuring a snow-capped mountain — no twinkling holiday lights needed.

Wreck has a deft equilibrium of bitterness and caramel richness, smooth without being syrupy, flavorful without being flavored with nutmeg or allspice. Consider it a wintry gift that keeps giving. “There’s no reason that you can’t drink that all winter long,” says brewmaster Greg Doss. 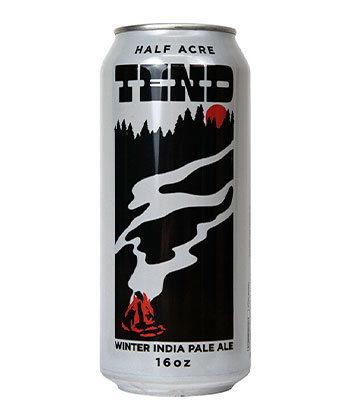 Inspired by Midwestern winters, Tend is brewed with specialty malts that evoke toasted caramel flavors, along with pine- and citrus-scented Simcoe and Mosaic hops. Brooklyn Brewery’s recent seasonal release is a red IPA boasting notes of juniper and jam, courtesy of Simcoe and Trident hops, and a warming finish from rye in the mash. The Hershey brewery’s most popular Hop Cycle seasonal, Blizzard of Hops combines a wheated base with Centennial, Chinook, and El Dorado hops for a classic combination of citrus and spruce tips, ideal for pairing with rich, wintry foods. The IPA-winter warmer hybrid now part of the brewery’s Strong Current series of seasonal double IPAs has a deft equilibrium of bitterness and caramel richness, smooth without being syrupy, flavorful without being flavored with nutmeg or allspice. Consider it a wintry gift that keeps giving.