Rosé is the pink wine du jour but, more than 40 years ago, White Zinfandel kicked off America’s love affair with what is now not-so-charitably called hot-tub wine. Developed by Bob Trinchero at Sutter Home in 1972 as an experiment with free-run juice from Zinfandel grapes, a “stuck fermentation” three years later left 2 percent residual sugar in the mix. Trinchero turned this into White Zinfandel as we know it today.

A wine does not develop this type of mainstream success without garnering some detractors. It’s currently possible to buy anti-White-Zinfandel merch, as a quick search for “Friends don’t let friends drink white zinfandel” T-shirts confirms. Fraiser Crane thought ordering a bottle White Zinfandel was akin to being mentally incompetent. A recent episode of Black-ish explained that “white zinfandel isn’t holy water,” but maybe you should “wait until your first divorce” to say such a thing. In short, White Zinfandel became so popular that mocking it became as trendy as drinking it.

Yet White Zinfandel endures. It may not be as fashionable as during Trinchero’s salad days, but it is currently available everywhere from gas stations to such diverse dining establishments as Ten Bells in New York City and Ruth’s Chris steakhouses nationwide.

At first blush, it’s odd that a pink wine with hints of melon and strawberry — that people drink on the rocks, no less — would persevere at a time when winemakers and consumers prize authenticity and complexity.

But White Zinfandel was the gateway to a lifetime of enjoying wine for a lot of people. For those who came of age in America during a certain era, it is an inescapable point on a collective continuum, like Reaganomics or knowing that Tommy used to work on the docks and that since the union’s on strike he’s been down on his luck.

“I remember dipping my toe into the wine pool for the first time with a White Zinfandel,” says Coly Den Haan, a sommelier and partner at Hot Hot Food and Vinovore in Los Angeles. “My best friend and I thought we were impossibly clever by swiping a bottle from her parents’ fridge and pounding it in their gardening shed minutes before dinner. Her family was French and served us escargot. I was 13 and didn’t have a seasoned palate yet.”

Needless to say, this was a challenging pairing. “It was many years before I tried wine again,” Den Haan says, adding, “I was not invited back for dinner.”

Even though the words White Zinfandel don’t carry the juice they once did, the concept of cold, sweet pink wine is more popular than ever. “When dry rosé became popular a decade ago, I was so happy to see ‘pink’ wine being taken seriously,” says Craig Leuthold, owner of Maryhill Winery in Washington. 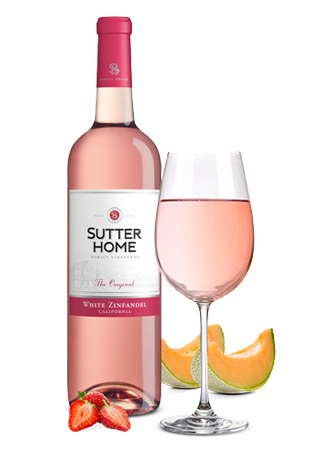 And no matter what your friends tell you, someone is drinking a lot of blush wine. Sutter Home sells over 3 million cases of White Zinfandel a year, and sales of its iconic, 187 milliliter-size single-serving bottles jumped 30 percent since 2013. Sutter Home Pink Moscato is up 9 percent compared to last year, and the company has added four additional styles of blush wine since 2013. Meanwhile, Beringer’s Main & Vine portfolio has seven White Zinfandel “family members” as of this spring.

Winemakers are happy to meet consumer demand, even if they don’t like the wine itself. “I never drank white Zinfandel as my palate didn’t embrace sweet wines,” Leuthold says, but adds that the variety has practical benefits. “The best part about it is that it can be made from so many different varietals, creating many different styles.”

In fact, it turns out a lot of the pink wine that people drink today is White Zinfandel in everything but name. White Girl Rosé is a White Zinfandel blend, as are chic canned wines from Ruza and The Drop. The Drop advertises its wine with the tagline, “THIS IS NOT YOUR AUNT’S PINK ZIN,” in case you’re wondering whether there’s some residual hostility to White Zinfandel as a concept.

Heck, White Zinfandel from Sutter Home sells best in states like West Virginia, Georgia, Louisiana, and South Carolina, confirming the variety’s anti-elite status. The words “it’s White Zinfandel” are the “But… her emails!!” of the wine world, triggering an outsize reaction that doesn’t jibe with the actual product.

Maybe, just maybe, the all-rosé-millennial-pink-everything era will garner some positive benefits for White Zinfandel’s reputation. In the United States circa 2017, when it comes to political ideas or cultural battle lines, it feels like the ’80s never left. White Zinfandel could be ripe for a comeback.

“There is still a stigma that surrounds White Zin, but it could have a place in the wine world again even amongst the pickiest aficionados as it’s actually quite fun to pair with spicier foods,” says Den Haan.

It is sweet, approachable, and has everything Americans like in a wine — except for the name.

“It’s kind of like the impossibly popular rosé’s sweeter, goofy cousin,” Den Haan adds. “I would not be surprised if it’s all the rage next summer.”