For more than 200 years, revelers have gathered in Munich each autumn to celebrate Oktoberfest. Bavarian immigrants brought the tradition around the world, with numerous cities welcoming fall with their own festivals featuring traditional games, music, and food.

But the real star of Oktoberfest is the beer. Munich’s six major breweries are the only ones allowed to serve pints at the main event, pouring a pale lager known as Festbier. Brewers around the world try their hand at the style each fall as well as making Märzen — named for the German word for “March,” as it was traditionally brewed each spring so that it would reach peak flavor just in time for the fall celebration.

We asked 14 brewers around the country what their favorite Oktoberfest beers are, whether they’re aiming to recapture moments spent in a raucous beer tent or just looking for something easy to drink during the last warm days of summer. Grab a stein and check out their picks.

The Best Oktoberfest Beers, According to Brewers 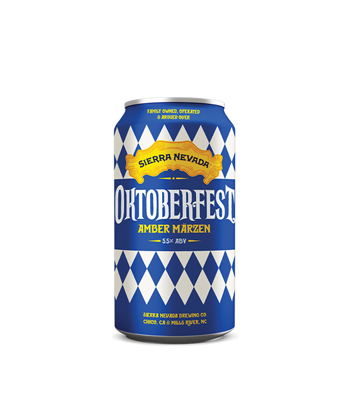 “Sierra Nevada makes an excellent Oktoberfest. When I can get it, I typically drink that. It’s just a nice, well-balanced Oktoberfest. It’s got all the traditional qualities that you want in an Oktoberfest. It’s nice and balanced with a good malty character and just a touch of sweetness. A well-balanced drinkable beer is key for an Oktoberfest. We just made one recently with Perennial, and that was our entire aim — to make a beer that you can drink all day. —Garrett Hickey, managing brewer and owner, Streetside Brewery, Cincinnati

“Whether Märzen or Festbier, if you brew an Oktoberfest, I’m going to try it. I don’t even mind the seasonal creep on this one; Oktoberfest in August? All the better. But while I’m sampling all there is to offer, the brew that stays stocked in my beer fridge all season long is Sierra Nevada’s Oktoberfest. Rich, biscuity malt with notes of honey and caramel, balanced by German hops and just this side of sessionable — this beer defines autumn and makes the impending Michigan winter that much easier to face.” —Abbie Groff-Blaszak, head brewer, Creston Brewery, Grand Rapids, Mich. “One of the issues we run into here on the West Coast is we don’t get super-fresh German beers. On the East Coast, you get a ton of great European beers, and they’re fresh. Out here, Oktoberfest has always been more crowdsourced or local interpretations on what it means to have a beer in September and October. Here, that means a beer that’s for 105-degree weather. We’re 30 minutes from San Francisco, so just far enough out that we’re not getting the Bay breeze. My non-traditional Oktoberfest beer is a wet-hopped beer. On the West Coast, fresh hops are harvested in late August, early September, so you can brew a beer with these wet hops, which imparts a subtle hop flavor which is kind of similar to German beer. If we’re looking at actual name brands, I always buy a 6-pack of Sierra Nevada Oktoberfest. There’s a local brewery out here called Berryessa, and I think their team does really great wet-hopped beers, so we always seek that out. I always get Dogfish Head Punkin around Oktoberfest because it reminds me of what I loved when I got into craft beer, which is not taking yourself too seriously, making beers that are easy to drink and crushable, and taking something traditional and turning it on its head.” —Thomas Vo, brewmaster, Calicraft Brewing Co., Walnut Creek, Calif. 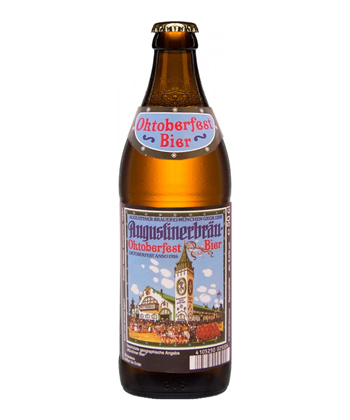 “I’ve always been drawn to the Oktoberfest event and celebration. Having been to Germany many times — even living there with my family when I was much younger — I attended my first Oktoberfest when I was 5 years old. Back then, it was about pretzels, candied peanuts, and amusement park rides. Now, I am drawn to the Oktoberfest beers from the source. My favorite is from Augustiner, Munich’s oldest independent brewery. Their Oktoberfestbier, with its lighter Helles pale straw color and clean malt notes, is deceptively strong at 6.3 percent. You can find that beer in the U.S. at select beer stores. Seek it out if you are able. But it you are so lucky to find yourself at Oktoberfest in Munich, inside the Augustiner tent you will be treated to steins of this beer served from 200-liter wooden barrels as you sit on narrow beer garden picnic table benches snuggled side by side next to your neighbor with the cacophonous sounds of music and singing. It’s a must. Proust!” —Shaun O’Sullivan, brewmaster and co-founder, 21st Amendment Brewery, San Francisco “While there are a lot of great Festbiers being put out, I prefer the Old World flavor of a traditional German Oktoberfestbier. Brewed in accordance with the German purity law of reinheitsgebot, Hofbräu Oktoberfestbier brings back memories of my time spent in Germany. Their traditional Festbier is golden in color with a bready aroma, and lightly carbonated with a smooth finish, making it a very easy-drinking beer. You can’t go wrong with a classic.” —Chris Kochendorfer, owner, Kochendorfer Brewing Company, Duncan, Okla. 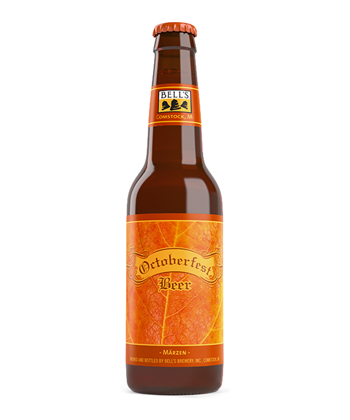 “Every year as summer starts to wind down, I look forward to the comforting style of Oktoberfest lagers. These cozy lagers seamlessly lead me into an autumnal mentality of crisp mornings and calm nights. It has become a seasonal ritual to seek out traditional-styled Oktoberfest Märzens to scratch that nostalgic fall itch. One go-to version of this style is Bell’s Brewery’s Octoberfest beer. When you dig into this Octoberfest beer, you are greeted with the aroma of a freshly fed sourdough starter that effortlessly transitions into a light bread crust flavor on the first sip. The malty sweetness and crisp hop character create a strikingly balanced, smooth finish. The fiery copper color and medium body provides the perception of a full-bodied beer without being overly filling, so you can keep your stein full without slowing down your night.” —Isaac Koski, R&D lead brewer, New Belgium Brewing, Denver 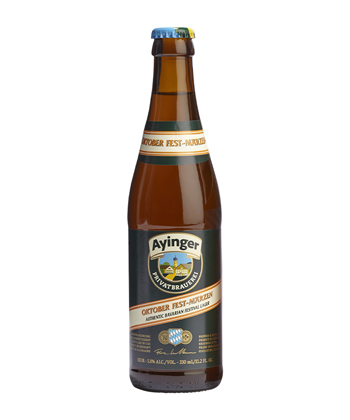 “Ayinger Oktober Fest-Märzen has always been one of my favorite Oktoberfest beers to enjoy. There is something about this beer that makes you want to order a full stein to enjoy alongside a brat and a nice chewy pretzel while listening to an oompah band (possibly why it is one of my favorite styles). I personally prefer a traditional Märzen style to the more modern pale Fest styles now served at Oktoberfest because of the tradition and skill behind the style. A really good Märzen balances bready maltiness with just enough bitterness, while still finishing toasty yet crisp and dry. Ayinger is one of the best examples of this style that I look forward to every year.” —Mark Poffenberger, head brewer, Haymarket Brewing, Bridgman, Mich. and Chicago 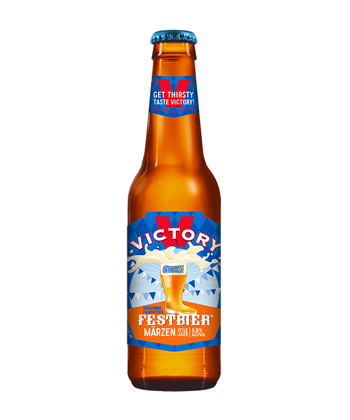 “Each fall, I look forward to the chill in the air, pumpkin in my coffee, and the release of Victory Brewing Company’s Festbier. This fall classic pairs beautifully with the changing of the season, and is the perfect beer to enjoy outside with friends. From the balance of Vienna and Munich malts to the whole flower goodness, the body and character of Festbier are refreshing and flavorful. It’s a beer I’m proud to keep in my fridge year after year. This year is no exception!” —Pete Olsen, lead brewer, Pipeworks Brewing Company, Chicago 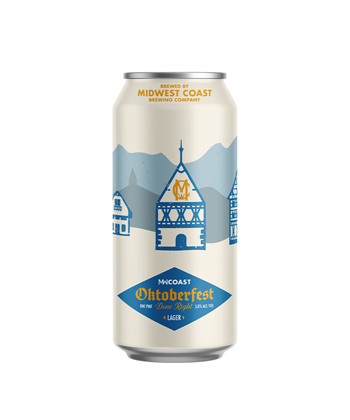 “When it comes to Oktoberfest beers, I am always looking for a good Märzen. I’m a huge fan of malty beers, and despite being a relatively simple recipe, it has a nice malt complexity with a balanced hop profile. Picking my favorite, though, is a bit of a challenge. Every year, I’ll line up as many Märzens as I can find and compare traditional German beers versus ones made here in the U.S. This year, as much as I like German Märzens, I’m going to have to pick Midwest Coast Brewing’s Oktoberfest Märzen. Nicely balanced malt flavors with just the right amount of hops. Also, don’t let the July/August release of these beers fool you. Märzens are the perfect beer for the transition to fall.” —Brian LaGrow, head brewer, Short Fuse Brewing Company, Schiller Park, Ill. 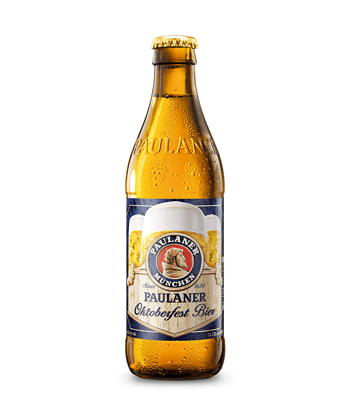 “My favorite German Oktoberfest beer is Paulaner Oktoberfest Bier. In 2016, I got to visit their fest hall in Munich. It’s super light-bodied and full-flavored, with notes of honey-like Pilsner malt sweetness and fresh herbal hops. It is thirst quenching but complex, great for party drinking. In the U.S., I love drinking AleSmith’s annual Fest beer AleSchmidt Oktoberfest. With a slight bread crust and a hint of caramel flavors, it’s dry and crisp. AleSmith has been working on this for years, and it shows with balance and quality.” —Ryan Taylor Brooks, founder and brewmaster, SouthNorte, San Diego 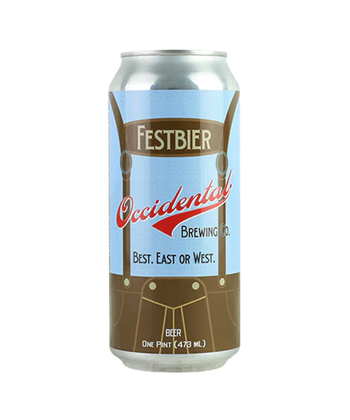 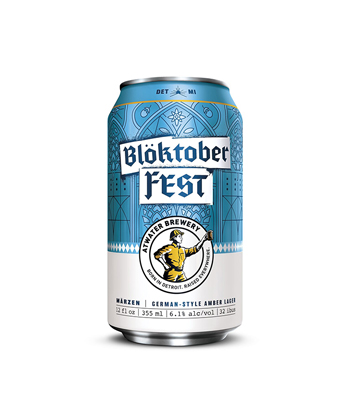 “The Oktoberfest style dates back hundreds of years and holds a special place in brewing history. The same is true for Atwater’s Blöktoberfest. The traditional German-style beer was one of our first brews produced at the Atwater ‘Block’ Brewery when the space was founded. While we have dropped the descriptor ‘Block’ from our name, the brand lives on as a reminder of our rich 25-year Detroit brewing heritage and is something that our loyal consumers look forward to each fall. Blöktoberfest won us our first Great American Beer Festival award in 1998 and has been pleasing crowds with its bready, nut-like character and crisp hop finish ever since. As summer transitions to fall in the Midwest, this is my favorite beer for all beer drinking occasions. From the traditional lederhosen-clad Oktoberfest celebrations to crisp football tailgates, Blöktoberfest is a beer that does it all in the fall!” —Katy McBrady, president, Atwater Brewery, Detroit 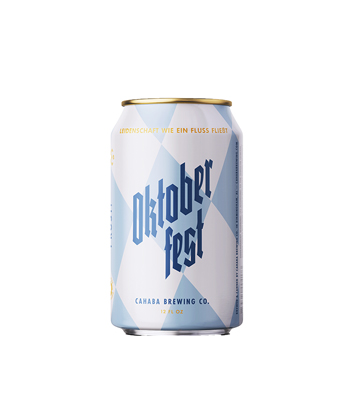 “On the broader Birmingham scene, Cahaba Brewing Company and Birmingham District both have nice takes on the Oktoberfest Marzen style. Cahaba’s Local Amber has the classic full body you expect from a Märzen while staying low on ABV at 3.8 percent, making it extremely drinkable. Birmingham District’s Oktoberfest stays true to style with rich caramel notes and an effervescent carbonation enhancing the flavor.” —Tosh Brown, head brewer, Back Forty Beer Company, Birmingham, Ala. “My favorite time of the year is when summer is winding down and fall is right around the corner. I have to make a drive around Lake Michigan to Wisconsin for a beer only available there. New Glarus Brewing Company’s fall seasonal, Staghorn Octoberfest, is what I need in my refrigerator and life. This beer is beautifully balanced with toasty and biscuity flavors and just the right amount of hop character. A beer for any occasion, New Glarus Staghorn is a fabulous representation of the style and my personal favorite!” —Chad Laning, production manager, Saugatuck Brewing Company, Douglas, Mich.