The boilermaker is arguably the simplest cocktail in the world, if you can even call it a cocktail: a shot of bourbon and a pint of beer, served side by side.

I have to admit: For the longest time, the concept of a boilermaker was confusing to me. Are you supposed to dramatically drop the shot glass into the beer? Do you shoot the shot, then sip? Or is it really more of a beer-and-a-shot special, with each drink meant to be enjoyed individually?

After hearing from a bunch of drink pros, it turns out the answer is… kind of all of the above. The combo has its roots in late 19th century Montana, where it was the drink of choice for miners ending their shifts. Today, unsurprisingly, it’s a popular shift-drink for bartenders — and anyone else who needs that one-two punch after a long day.

Based on what the pros told us, there’s no single right way to drink a boilermaker. Even the basic components aren’t set in stone: There’s no reason you can’t swap the bourbon for another spirit, or even replace the beer entirely with a cider (like one of our sources recommends). But whether you’re a traditionalist or not, there’s still plenty of room for choice.

Read on to find out what shot-and-drink combos these drink pros are ordering at the end of the day.

Keep reading for details about all the recommended boilermakers! “I’ve been sipping Chicago-based FEW Spirits bourbon and hefeweizen as of late (I personally don’t have a specific one. I’m happy with whatever in the category). Also I don’t combine them, I drink them separately and just switch between sips! It’s a slow sipper for me, definitely not just a shot and a quick beer.” —Elliot Clark, Apartment Bartender, Denver “A classic boilermaker combo for me is Old Grand-Dad Bonded with a stubby bottle of Coors. My preference is to nurse both rather than shooting — if you like alcohol, making a little bit last a long while is the way to go. Something about the spicy, unrefined palate of the spirit finds a pleasant counterpoint in the rich, sweet lager. And you can stroke your mustache gazing into the middle distance while imagining gold rushes of yore. Or something like that.” —Joe Connolly, Director, Springdale Beer Co., Framingham, Mass. 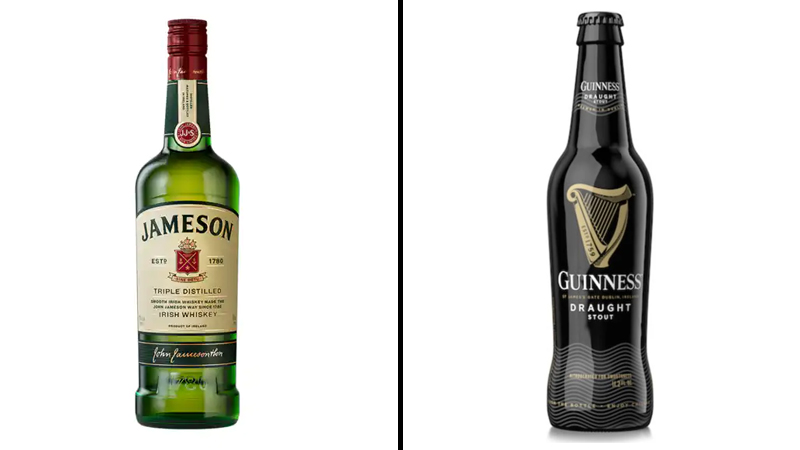 “My personal favorite boilermaker combination would be Jameson and Guinness. I’m a traditionalist and I like the Irish flair on this one. The Jameson has a bit of bite and the creaminess of the Guinness cuts right through. There are multiple ways to enjoy a boilermaker – my preference is to take the shot of whiskey and chase it with beer. It’s a great way to take the top o’ the edge off if you know what I mean.” —Joshua Floyd, Beverage Director, Biscottis, Jacksonville, Fla. “I really like bourbon and beer. A boilermaker is something that I would mostly associate with my college days and it brings me back to that atmosphere. … [Today] I would sip a Bulleit Rye and pair it with an Alexandr 10°, a Czech pilsner brewed by Schilling Beer Co. It has a great, nice bitter hoppiness to it that would really pair well with the spiciness of the Bulleit Rye.” —Ted Kenny, Owner, Top Hops Beer Shop, NYC “My favorite boilermaker right now is our local South Beach Blood Orange Sunset IPA and Michter’s Bourbon. The IPA has these sweet orange fruit notes that pair so well with the smooth caramel flavors the Mitcher’s Bourbon has to offer. It’s also a great boilermaker for outside in sunny South Florida because the IPA is not too heavy and even has electrolytes, while the Michter’s Bourbon is light and has smooth flavors. I love sipping the beer almost halfway so the taste buds have all the barley and bubbles lingering, and then shoot the shot to get the blood flowing. Finish the beer slowly so all the flavors can combine and you can create that match made in heaven throughout your boilermaker experience.” —Andres Rairan, Lead Bartender, Kimpton Surfcomber Hotel’s The Social Club and High Tide Beach Bar & Grill, Miami Beach “My personal favorite boilermaker and what I think it best is actually a simple classic: Miller High Life with a shot of Tullamore Dew. I would recommend this pairing because it’s a staple that I feel most bartenders know and love. Boilermakers are classically ordered by bartenders after a long shift. While there may be fancier pairings, this combination is about simplicity and accessibility. I prefer to shoot the Tullamore and chase with Miller High Life.” —Denise ‘Didi’ Padín Cuevas, Bartender, Siro Urban Italian Kitchen, Orlando, Fla. “My personal choice would have to be a neat pour of Stagg Jr.  — it has a nice high proof, around 130, which lends itself to a beautiful amount of layers of caramel, baking spice, vanilla, and chocolate — which pairs beautifully with Darkness from Surly Brewing in Minnesota. This seasonal release is nearly always a barrel-aged Russian imperial stout rich with coffee, toffee, caramel, and toasted grain. Each iteration is a masterclass in brewing; thus when you have a sip of Stagg Jr. — one of the quintessential high-proof bourbons — followed by a healthy swig of Darkness, you have what I consider to be the best boilermaker!” —Steve Severson, Bartender and Beverage Director, Coco’s Seafood & Steakhouse, Oconomowoc, Wis. 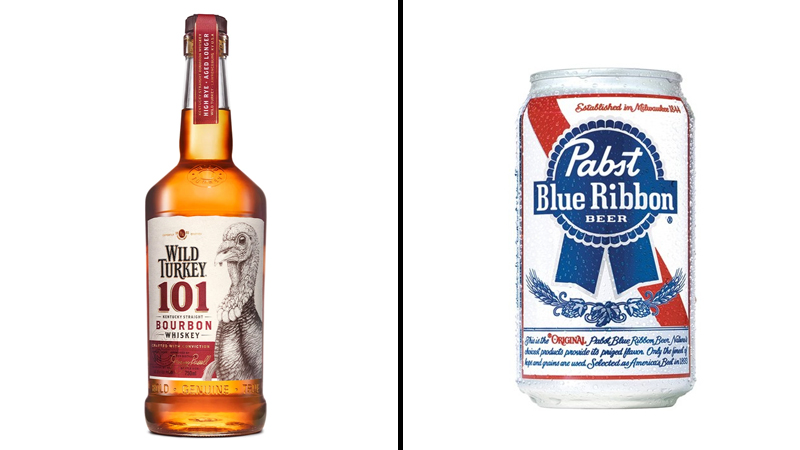 “Between my grandfather and great-grandfather, my family worked nearly 60 years for Pabst Blue Ribbon, so that beer holds a special place in my heart. My grandfather didn’t have a bourbon of choice and didn’t drink boilermakers, but the idea that a boilermaker should be an ice-cold Pabst Blue Ribbon and bourbon has stuck with me. I feel that the beer should be light and crisp, something very cold and refreshing. My bourbon of choice is Wild Turkey 101. I like to sip the beer and sip the bourbon until both are empty. I also love the American version of the ‘English boilermaker,’ which involves tossing the shot in the beer.” —Peter Kalleward, Bartender, Destination Kohler, Kohler, Wisc. “I love an East Coast IPA, but a boilermaker requires an ice-cold lager. Tough to find, but if I had my choice it would be a draft Kirin Ichiban in a chilled glass with a shot of Buffalo Trace. Shoot the bourbon and sip on the beer. I want one now.” —Harry McNamara, Bar Manager, Urban Cowboy’s The Lodge, Big Indian, N.Y. “For a traditional boilermaker, I prefer a local amber on draft, but if I’m away from home, Alaskan Amber Ale out of a bottle will do nicely. For my bourbon, I use barrel strength for a robust flavor that stands up to the beer a bit better. Elijah Craig is my go-to, but Booker’s or Blanton’s are worth the adventure. My secret to a good, enjoyable boilermaker is to tip about a half ounce of my bourbon into the beer, then drink them side by side.” —Nick Federoff, Lead Bartender, The Holbrooke Hotel, Grass Valley, Calif. “These days I’d say my favorite boilermaker would be an Aval Cider, in a can of course, and a shot of Belle Meade Bourbon! I actually prefer not to shoot the bourbon, but sip on it while drinking my cider. And, of course, cider in a can so I can pop on my favorite Koozie, which currently is my Turkey & The Wolf one.” —Alex Jump, Bar Manager, Death & Co. Denver “When pairing wine with food, sommeliers will choose a bottle with flavors that best complement the dish. The same can be done here — say a light, creamy stout such as Guinness paired with a shot of a delightful Irish whiskey like Teeling Small Batch (flavors of stone fruit, vanilla, and malt). On a hot summer day, a Mexican lager such as Tecate or Modelo pairs beautifully with a fresh and bright blanco Tequila like Partida (flavors of roasted agave and freshly cut jalapeño). However, there is no need to get complicated if all you want is a shot of Old Grand-Dad 114 to accompany your Miller High Life. I view the boilermaker format as a judgement-free zone. If you are more of the sip-and-savor sort of drinker, I would recommend having a sip of spirit accompany every few sips of beer. This way you can play around with the complementary flavors and see how each of the two alcohols affect each other as they interact with your palate.” —Erik Delanoy, Bartender, NYC