Do you work in Midtown? Congratulations! You work in one of the toughest places in Manhattan for after-work drinks. Unless you want to crowd into a bar near Grand Central with a bunch of people who are all waiting for a train to head out of the city to the burbs, finding a good place to grab a cocktail, a glass of wine, or a pint is tough. But don’t fret, because we’ve got you covered. Here are the eight best places to head if you need a drink and you don’t want to leave the neighborhood. Perfect For: Classic cocktails from the empire that made cocktails cool again in NYC.
Founded by Sasha Petraske, who is widely regarded as the mixologist who revitalized the world of cocktails in New York, this bar is tucked inside a two-story townhouse — marked only by a light above the door. Perfect for drinks where you also want to have a conversation you can hear or if you want to feel like you’ve gone back in time to Prohibition, when speakeasies were the only places to get a good drink.
154 E 33rd St Perfect For: Anyone who loves craft beer.
Arguably the best craft beer in New York, and — GASP — it’s in East Midtown. This place is a serious beer-drinkers bar. There are 70 drafts that change often, and over 150 bottles. If you’re into beer, this is the only place to go.
11 E 36th St

The Raines Law Room At The William Perfect For: Feeling a little swanky.
The William used to be a private club, but it was recently taken over by the Raines Law Room team who opened a second outpost of their famous cocktail bar in the space. They also run The Shakespeare, a classic British pub in the basement, for when you’re in the mood for a pint instead.
24 E 39th St Perfect For: Your savior when you’re stuck near Bryant Park.
Located in the basement of The Andaz 5th Avenue hotel, this is a great place for a drink that’s far enough from Grand Central that you avoid the commuters, yet close enough if you still need to catch a train.
485 5th Ave Perfect For: People who just need a glass of wine.
With dozens of wines by the glass, this is the place to head when you’re looking for a little after-work vino. While most bars have wine, the wine at most bars isn’t very good. But at this wine bar, you are sure to find a glass to your liking. Just try to get there early — the place is tiny.
242 E 50th St # A Perfect For: When you want to feel like a New York hot shot.
Upstairs at the Kimberly Hotel is a swanky rooftop bar with great views and good drinks. It’s worth noting, however, that the cost of your drinks also includes the cost of the view, so be prepared to pay a bit more, but it’s a fun experience. The view of the Chrysler Building close up will take your breath away.
145 E 50th St Perfect: You’re stuck in the East 50s and you can’t escape.
Is this a great cocktail bar? No. But is it good? Yes. Is it also packed? Absolutely. This is one of the only good cocktail bars in the area, so expect a crowd. At least you’ll be drinking a pretty good Old Fashioned.
198 E. 54th St 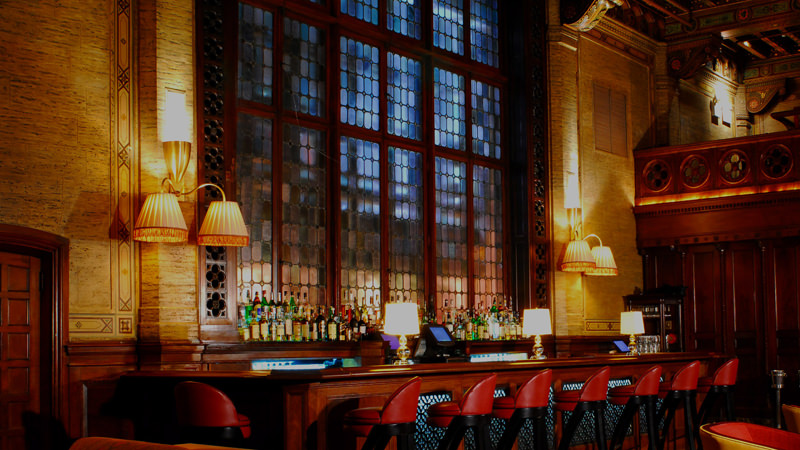 Perfect For: Feeling like you are in old New York
While we wouldn’t normally recommend a bar in or around Grand Central, The Campbell  is a clear exception. Formerly known as The Campbell Apartment, the bar went on a brief hiatus, closing in 2016. In May of 2017 it reopened as The Campbell, retaining all its glory while also adding two additional bar spaces, including one outside. The space is the former private office of the railroad executive and millionaire John Williams Campbell, and it’s been maintained impeccably. The new version of the bar is easier to find — it used to be pretty hidden — and there is no longer a dress code. It’s a great place for a solid cocktail and incredibly impressive if you want to take a client out.
15 Vanderbilt Ave