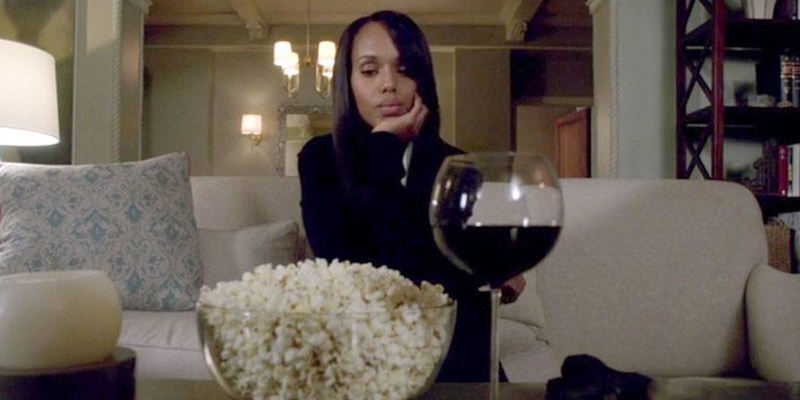 Art doesn’t imitate real life in the season 6 premiere of “Scandal.” On screen, the nail-biting election is decided in favor of the good, liberal Democrat, Frankie Vargas. (Although it’s the woman — Mellie — who loses. Again.) It’s hard to believe that this episode was written six months ago but I guess the writer’s room thought they would be prescient and predict the election in favor of the Dems. Wrong. Little did they know that our current reality would be as absurd — dare I say entertaining? — as the far-fetched antics of Scandal ever could be.

While Olivia Pope usually spends many moments in each episode drinking her favorite Reds — and never getting a drop on her stark white clothing — and the president spends much of his time in the Oval throwing back scotch and brooding (missing Olivia), there’s hardly any time to imbibe on this fast-paced first episode, which I’d call “The Moments Where Everyone Should Have A Drink (But Doesn’t) and I Do, Instead.”

I’m not sure who I was supposed to be rooting for in this one, the treacly Mellie or the treacherous Cyrus — but there’s no time to celebrate, because soon after the election’s been called, Vargas gets shot. I definitely didn’t see that one coming and I have to drain my Champagne glass and move onto something harder.

Of course, Olivia’s nefarious father must have something to do with this assassination. Will Olivia share a drink with Eli, the connoisseur of fine wine? Or will her dad berate her for her stupidity in failing to see who benefits the most from this murder? The latter, of course, and it brings up my own daddy issues, so I am going to open something good.

Fitz and David Rosen Have It Out

You’d think that when the president and the hot Attorney General (I know, I know, he’s such a pussy-whipped szlub, but I can’t help but remember his days from The West Wing) have it out about the future of the country, there would be drinking involved, but I guess there’s no time when discussing the intricacies of the electoral college and the popular vote (Something we’ve all been schooled in as of late). Apparently, the voters chose a winner who is now dead (sorry, spoiler. But Vargas is incorruptible, hence he had to die) but it’s the electoral college who will pick the winner. Whomever Fitz picks wins. I need a drink.

Mellie and Olivia Have it Out

The First Lady and Olivia had their drinks — straight out of the Champagne bottles which were meant for a victory party — but now they’re stone-cold sober as they yell and scream, Scandal style. Mellie wants out: no more murder, no more election swinging, no more deaths, she’s done. “I’M NOT DONE!” Olivia shouts. Mellie tells Olivia husband she wants to be president. Like Really Wants. But no one drinks to that. I will!

Reunited and It Feels So…Shouty

Fitz is pleased to see Olivia, even if there’s no physical contact, no drinking, no Vermont. Just smoldering looks and shouting, as Washington’s most powerful person tries to convince the president to throw his support to his ex-wife, and not to the conniving Cyrus. “What if you’re wrong?” he says about her accusation of murder. “150 million voters made their choice and it wasn’t Mellie.” (Millions made their choice now and it wasn’t our current president either, but who cares about the popular vote?!) He gives her 24 hours to provide proof. Speaking of proof, I eye the liquor bottles in the corner of the screen. I’m sure the president has a drink after she leaves. I sure do.

Olivia runs to confront Cyrus about the murder. Didn’t he step away just as Frankie got shot? But at the hospital, he’s bloodied and in a Clockwork Orange daze that Abby and Olivia seem to buy. I think Cyrus is acting. Isn’t he? I’m not sure. A drink will settle my doubts.

Be The Best You Can Be

Fitz assures the still-bloodied and somewhat less nutty Cyrus that he’ll endorse him but he should be worthy of it. “I am handing you the most beautiful thing in the world. I am handing you America.”  I almost tear up at that, but it’s Scandal. And my bottle is still half empty. I mean full.

Olivia’s team is looking for proof — anything — that the gunman didn’t act alone (Okay now we’re bringing in every presidential conspiracy). Charlie’s being annoying — he’s pestering Quinn to blow off this case and go to the Caribbean. Finally Huck — usually not perceptive about humanity — intercedes and tells Charlie Quinn’s afraid of the water and that Charlie, psychopath of all psychopaths on a show of psychopaths — wants to get married. Quinn nearly throws up. Not a champagne moment, but maybe I should go back to my bubbly.

If you Like it Put a Ring on It

Quinn bitches about marriage to Huck as they amble through the forest searching for the witness who squealed on Cyrus. But the cabin in the woods explodes and all the duo find is her hand — with a ring on it. Quinn returns to the office and accepts Charlie’s proposal. Mazal Tov!

There are moments that you live for on this show and that’s not when Olivia is choosing between her lovers, but when she’s on top of her game but not showing her full cards. She rushes in to offer Cyrus her condolences — and he expects the full grovel the way all new candidates do — but in their embrace she informs him “I know you killed him and I’m going to prove it.” She walks off stage, fiercely, hopefully, hopefully, getting her one deserved glass of wine.