Even before the Covid-19 pandemic struck, drinkers were beginning to eschew the buttoned-up, somewhat pretentious, neo-speakeasy style of bar that had defined the early stages of the cocktail renaissance. Comfort, friendliness, and simply having a “good time” were suddenly starting to become more important for everyone. In Columbus, Ohio, two offbeat bartenders decided to take that ethos to the next level.

It was 2019 and Beam Suntory was looking for a way to get craft cocktail bartenders to start acknowledging DeKuyper, its low-brow liqueur brand, which had certainly seen better days. So the company approached Historic Revelry, a Columbus-based creative agency run by local bartenders Joshua Gandee and Chris Manis. Always up for playful ideas, the two realized there was only one way to truly celebrate DeKuyper.

“Let’s reintroduce it the way people already know it,” says Gandee. “At a campy, chain restaurant — and through the forgotten cocktails of the ’80s and ’90s.”

While the running trend had been for many top-50 bars and bartenders to spend less time running their own joints and more time doing high-brow, high-dollar pop-ups across the globe, Gandee and Manis decided that they’d launch a pop-up — the Royal Fern — designed to recall a simpler, cheaper, and, yes, cheesier era.

“But I hadn’t been to those restaurants in a really long time,” says Gandee, who notes his first-ever job was as a busboy at Red Lobster when he was 15. “So it’s like looking at photographs, and you wonder if you really have a correct memory or you’ve just memorized the photo.” 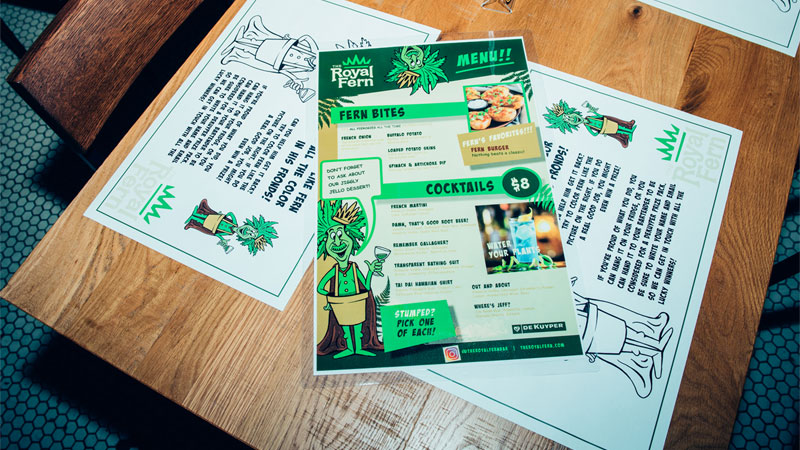 The Royal Fern would hope to mimic a time from the late-1960s up through the ’90s when so-called “fern bars,” literally decorated with ferns, started attracting singles looking to mingle. (The original fern bar, according to The New Yorker, was TGI Fridays, which was joined by many competitors. These venues evolved into neighborhood “bar and grill” concepts.) Adopting the personas of “Chris Royal” and “Josh Fern,” the two visionaries aspired to start transforming their city’s most esteemed cocktail bars into these “bar and grill” chains that dominated the landscape a few decades ago. But with the coming of Covid, that vision was put on hold.

But as the pandemic stretches on, and as a massive recession is all but guaranteed on the other side, I’ve begun to wonder if the bars that reopen might follow the model that the Royal Fern had already laid out in the “before times.” As drinkers and diners look for comfort and nostalgia, fern bar-like concepts may be even more relevant moving forward than they were pre-Covid.

So what will it take to create a comfortable, welcoming bar in the post-pandemic future?

The first step for Manis and Gandee was creating a restaurant mascot, since in their minds all ’90s chains had some goofy character associated with them. They settled on “Fern,” an anthropomorphized, frond-mustachioed Polypodiophyta, wearing a suspendered flowerpot as shorts. They would print coloring page placemats and oversized laminated menus. They’d offer plastic souvenir sippy cups “for the kids.” For food items, or “bites,” nachos and loaded potato skins were a must, and they would all need to have over-the-top names to let you know how massive the quantities were. “It should feel like [such] a Sisyphean task that you’ll never finish them,” says Manis.

Drinks-wise, they would serve items like a spiked root beer float, an Amaretto Sour, and a Blue Hawaiian, made with déclassé stuff like Watermelon Pucker, sure, but also featuring modern improvements like fresh juices and high-quality modifiers. Gandee and Manis also knew that back then, there was one cocktail that defined chain restaurants more than any other: Sex on the Beach. Their modernized riff would be called Transparent Bathing Suit and it’d be elevated by the use of a makrut lime-infused vodka and bitters, along with the traditional Peachtree Schnapps. Even if it tasted much better, the cocktail certainly wouldn’t have seemed out of place at a Ruby Tuesday or an Applebee’s circa 1992.

“It’s kinda tough to say what we borrow from what,” says Manis. Based on the name, you can tell they definitely wanted to offer a nod to those original fern bars of the 1970s, like TGI Fridays. “A lot of those restaurants from that era were all so similar.”

Still, they were most inspired by Max & Erma’s, known in its heyday as “The Neighborhood Gathering Place,” a chain that started in Columbus in 1972 and eventually spread to dozens of locations in the Midwest. It became famous for its serve-yourself sundae bar set inside a converted bathtub. Both Gandee and Manis have a great nostalgia for Max & Erma’s, but recognize that might’ve only been on account of their naiveté in youth.

“When I grew up that was just the normal place you went to. I think we went there almost every weekend,” says Manis, who grew up in the Columbus suburbs. “Until I got older, and got into fine dining, that’s just what I thought restaurants were supposed to be.”

Ironically, the Royal Fern’s first pop-up event would be held at the site of the original Max & Erma’s, in Columbus’s German Village neighborhood. That location closed in the summer of 2017 and was later taken over by a cocktail and pierogies spot called Wunderbar, which also closed before Gandee and Manis came along. Conveniently for the Royal Fern, the space had retained a lot of Max & Erma’s decor, including the stained glass Tiffany lamps hanging over every booth. The only accoutrements Gandee and Manis needed to add for the Royal Fern were their own placemats and some hanging ferns. “It confused a lot of people in the neighborhood,” says Manis. After printing their menus off, a worker at OfficeMax congratulated them on opening a new restaurant. “And a little old couple came up to me complaining that no one had come to the hostess stand to seat them, [asking,] ‘Is this under new management?’”

The crowd for that first night was mostly service industry people, many of whom came after their own shifts ended. These cocktailians really got into the satire of the whole pop-up, eventually calling for off-menu drinks from that era, like Flaming Dr. Peppers. One of the area’s top bartenders, Greg Burnett, handled them with aplomb. Once people saw how fun the first event looked on Instagram, a packed second event was all but guaranteed.

The Royal Fern’s second pop-up in Columbus was four months later, this time at The Bottle Shop and the concept really came into focus. The bartenders, like Barbara Reynolds, wore green dad hats and thick red shirts, with their pants held up by tri-colored suspenders with Chotchkie’s-like flair on them. Drinks were even more chain-friendly with blended Strawberry Margaritas and Cosmo Jell-O shots. A third pop-up would follow on Halloween, at Antiques on High, Seventh Son Brewing’s sour ale and hazy IPA brewpub.

“They understood the Royal Fern completely,” explains Gandee. “Everyone was in a jovial, costumey mood. They realized that they got to essentially play a caricature of themselves. It made for a super-fun environment.”

Reinventing the Chain Bar for the Post-Pandemic Future

Unfortunately, the fourth Royal Fern pop-up and its biggest event yet had to be canceled at the last moment due to Covid-19. Set to be held on St. Patrick’s Day 2020 with a new sponsor — Patrón — the “El Helecho Real” (Spanish for royal fern) concept was going to be really weird. The concept was, basically, what if a chain Mexican restaurant like, say, Chi-Chi’s, decided to put the bare minimum effort into celebrating the Irish holiday?

“We really wanted to push it to see if fans of the Royal Fern could understand the joke — and if we could take it to an even further level,” says Gandee. As yet, that question goes unanswered.

Like all bartenders, and bar-goers, the duo hopes to be back in the bar soon. In these turbulent times, Gandee and Manis believe there’s something really comforting about the chain restaurants of decades past. Maybe we’ll even start seeing a rise in fern bars and other nostalgia-based concepts once people start going out again?

If so, Gandee and Manis are ready to help, and they won’t even need to travel to your city. They consider the Royal Fern the first-ever pop-up bar that’s based on franchised restaurants. Similar to the Miracle pop-up bars that are now all the rage around Christmas, Historic Revelry can supply a complete “party in a box” with menus, flyers, employee clothing and merch, their song playlist (which sometimes includes the sounds of “sizzling fajitas” coming out of the kitchen), recipes for the cocktails, and more. You, too, could host your own Royal Fern event, even if you aren’t exactly a lover of chain restaurants.

“All our memories of that time,” he says, “weren’t about having terrible meals — they were about having a great time with our family and friends.”

Once we get through all this, we’ll all be looking for comfort — and this is one bar concept that over-delivers.