Crafted in Germany’s Black Forest mountain range, Monkey 47 ranks among the most revered gins with enthusiasts and collectors.

While often considered a modern brand that’s grown to prominence during the so-called “gin-aissance” of recent years, the spirit’s origins stretch much deeper, beginning in the 1940s. According to the brand’s eclectic blog, The Monkey Drum, the story of Monkey 47 begins with Wing Commander Montgomery Collins of the Royal British Air Force, who became enticed by the Black Forest while stationed in Germany. The forest’s natural offerings, unique flavors, and wildlife enchanted Collins so much that he decided to settle down in the area after serving his time in the military.

As a true Englishman, Collins also had an appreciation for good gin, so he set out to create his own using the natural resources around him. From here, the story takes a twisting turn, as the formulation for Monkey 47’s intriguing recipe came to Collins in a dream, and a bottle accompanied by a letter and sketch was found years later in his home. The sketch, which was labeled “Max the Monkey — Schwarzwald Dry Gin”, also gave detailed descriptions of the ingredients originally sourced by Collins.

The spirit inside that bottle possessed a unique flavor and decades later became the obsession of former Nokia executive Alexander Stein, who learned of Collins’ tale from a coworker. Inspired by Collins’ creation, Stein, who had family in the distilling business, reached out to distiller Christoph Keller to develop a craft gin reminiscent of Collins’ original spirit. Their product was a one-of-a-kind premium spirit that has intrigued palates since its 2010 debut. Read on to learn 10 more interesting facts about Monkey 47 Gin.

Monkey 47 is an industry newbie.

Though its botanical blend dates back to the ’70s, the Monkey 47 gin we know today was launched far later. After discovering the gin in 2006, Stein and Keller became smitten with the flavor and set about creating a gin using ingredients from the Black Forest. Just four years later, in 2010, the pair launched their first batch of Monkey 47 with a recipe as close to the original as possible.

Monkey 47 is an authentically German gin.

More than just the source of most of Monkey 47’s ingredients, the Black Forest, in southwest Germany, is also home to the gin’s quirky-looking distillery. But proximity wasn’t the only consideration when choosing the distillery’s location. According to Stein, Germany is renowned for its traditional coppersmiths, such as Arnold Holstein, who craft the world’s finest distilling apparatus. Visitors can find Monkey 47’s home on a picturesque old farmstead located just outside of the forest, and can even tour the Wonka-like facility with an appointment.

Each of the ingredients in Monkey 47’s botanical bill is hand-picked to deliver a fresh robust flavor profile. During a maceration process, distillers extract the essence from the herbs, fruits, and other plants before sending them off to be distilled. Cooking the ingredients releases fragrant vapors that are condensed and collected to further deepen the gin’s flavor.

There is a peculiar significance behind the number…

The number in this gin’s name is no coincidence and has two significant meanings. For starters, 47 represents the number of botanicals used in the gin’s botanical bill. According to legend, this number came to Commander Collins during a dream in which he discovered the perfect number of ingredients for a one-of-a-kind gin. The number also refers to the liquor’s strength, which comes in at exactly 47 percent ABV.

As an avid animal lover, Collins became heavily invested in the rebuilding of the Berlin Zoo while stationed there. During this time, he became a sponsor for a monkey named Max. After leaving the Royal Air Force in 1951, Collins returned to the Black Forest and opened a country guesthouse named Zum Wilden Affen (The Wild Monkey) in honor of his furry friend. Upon formulating Monkey 47, it was only fitting to honor Max once more.

Of the 47 ingredients that make Monkey 47 unique, there is one that truly stands out: lingonberries. This elusive berry, found in parts of the Netherlands, Scandinavia, Sweden, and Germany, adds a fruity taste and a slightly bitter note to the spirit.

Monkey 47 is part of a famous booze family.

Monkey 47’s parent company, Pernod Ricard, is no stranger to well-made liquors, producing some of the most notable booze brands in the world, such as Absolut Vodka, Jameson, and The Glenlivet. In 2016 the alcohol conglomerate took notice of Monkey 47 and bought a majority stake in the brand. As its popularity grew, Pernod took things one step further and became the gin’s sole owner in 2020.

There’s a Monkey 47 for streetwear fans.

With Monkey 47, two is just enough.

At its core, Monkey 47 is made up of two mainstay styles, the Schwarzwald Dry Gin and the Schwarzwald Sloe Gin. The Schwarzwald Dry Gin offers concentrated aromas of dried berries, citrus peels, and spiced herbs. More complex than traditional dry gins, it retails for around $69 in the U.S. The Schwarzwald Sloe Gin is made with blackthorn berries, also known as sloe berries, which are harvested after the first frost. It has a distinct berry color and taste that is juicy and bright. While it’s not readily available in stores across the U.S., fans can find bottles via a handful of online retailers.

Along with its two main expressions, Monkey 47 also produces an annual Distiller’s Cut bottling. Each of these releases highlights a different (additional) botanical. Though released annually, Distiller’s Cut is made in limited quantities and requires a winning ticket from an online raffle to buy. As a result, this bottle is prized by gin collectors. Monkey 47 Distiller’s Cut (2021):
Monarda didyma is the "species rara" that defines this year's edition of Distiller's Cut. Sometimes referred to as "bee balm," the aromatic ... Monkey 47 Distiller’s Cut Dry Gin (2019):
In 2019, Monkey 47's annual limited-edition release was designed around mace, a spice made from the organic material that covers nutmeg ... 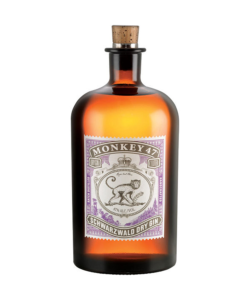