Just outside the town of Tequila sits La Cofradía distillery, home of Casa Noble Tequila, among many others. Tequila production there traces as far back as the mid-1700s, making it one of the oldest distilleries of premium 100 percent Blue Weber agave tequila. By 1800, it reached its daily production capacity of 10 66-liter barrels.

Today, La Cofradía distillery grows close to 1 million agave plants exclusively for Casa Noble. Founded in the 1990s by Jose “Pepe” Hermosillo, Casa Noble was inspired by the long history of tequila-making that came before it. With its triple-distillation process, small-batch production, and unique offerings, there’s still plenty to know about this relatively young brand.

Read further for 10 things you should know about Casa Noble Tequila.

All Agave Is Grown On Site

Production is a tight circle at Casa Noble. There are approximately 3,000 acres of estate-grown agave on site, which produces 150,000 liters of tequila every year. Limiting the need to move the agave from distant areas decreases transportation costs and allows for quality levels to remain consistent.

Production Takes a While

Most distilleries will bulk-produce to meet demands. But at Casa Noble, each small batch is monitored and assessed to meet internal standards. Any plant waste created during production is used as compost to fertilize the fields. Casa Noble’s efforts to manage and reuse any waste means producing small quantities at a slower pace. To begin, the agave is harvested when it reaches its fullest maturity, after 11 years (most growers will harvest after only seven years). In production, fermentation at Casa Noble lasts five days because it relies on natural, airborne, yeasts (this process typically takes anywhere from 20 hours to three days). Distillation at Casa Noble also takes more time because its tequila is triple- distilled, a process that takes 12.5 hours. (At most other distilleries, this process takes from two to five hours.)

The Cooking Process Takes Longer, Too

Casa Noble maintains its tequila flavors are deeper and more complex than its competitors’ because of the cooking process. Most tequila producers cook the agave for six to eight hours at intensely high temperatures, like a pressure cooker. The agave used at Casa Noble gets slow-cooked in stone ovens for anywhere between 36 and 38 hours, which imparts more complex, smoky, and vegetal characteristics.

It Opts for French Oak Casks

Most reposado tequila is aged in second-fill American bourbon barrels. But Casa Noble believes those types of barrels allow too much char flavor into the tequila. Instead, the light char inside French oak barrels is better suited to the Casa Noble brand. The distillery’s reposado expression ages for one year in used French oak casks, while the añejo spends two years in new barrels before bottling. The reposado barrels are used seven to eight times before being disposed of.

The Founder Handles Every Bottle of Extra-Añejo

After five years of aging (and hard-earned waiting), Casa Noble founder Jose “Pepe” Hermosillo bids adieu to each bottle by signing and numbering the label.

Casa Noble Was One of the First Celebrity-Owned Tequila Brands

The pool of celebrity-owned tequila gets deeper by the day. Over the past few years, everyone from George Clooney to Rita Oro has dived into the action. Casa Noble was one of the first brands to align with an A-lister. In 2011, Carlos Santana became part-owner. However, his stake was bought only three years later when Constellation Brands acquired the brand.

It Has a Unique Connection to Robert Mondavi

Casa Noble Alta Belleza Tequila, which runs between $1,100 and $1,200 per bottle (if you can find it), has a unique wine finish. After aging three years in French oak barrels, the Extra-Añejo rests an additional six months in Tonnellerie Taransaud French oak wine barrels. These same barrels were previously used to age Robert Mondavi Winery Cabernet Sauvignon from the illustrious To-Kalon Vineyard in the Napa Valley.

It Led the Charge in Organic Certification

Casa Noble was one of the first tequila producers to be USDA certified organic. It was the first brand to achieve both crop and process certification. The current fields were untouched before planting the agave more than 20 years ago, which means there has never been any use of fertilizer or chemicals, or risk of cross-contamination.

As part of the Constellation family of brands, Casa Noble is aligned with several other wine, beer, and spirits companies. Its brand siblings include Mexican beers like Modelo and Pacífico, spirit labels like Svedka vodka and High West whiskey and wine brands such as Robert Mondavi, Kim Crawford, Meiomi, and Ruffino, among many others.

It Has Expressions For Every Price Range

Considering the amount of care and attention taken in the agave fields and at the distillery, each classic expression in Casa Noble’s portfolio is surprisingly affordable. Named one of the 10 Best Cheap Tequilas Under $50, Casa Noble Blanco averages $36. The reposado hit all the right notes at just $46 and landed a spot on our 2019 list of 30 Best Tequilas for Every Budget. And for only $56 — which is less than buying a dozen roses from a florist — the añejo sits comfortably on VinePair’s list of The 10 Best Tequilas Under $100. 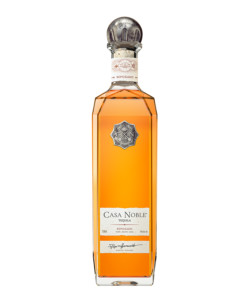 Casa Noble Añejo:
The deep amber hue of this añejo belies a spirit that is earthy, peppery, and youthful — particularly on the nose. The luscious ... Casa Noble Blanco:
This is an expressive blanco tequila whose profile offers mass appeal. The aromas lean into the earthy side of tequila, delivering scents ...