When it comes to craft spirits, there are plenty of producers mixing it up — and today, that means a lot of careful blending. One of the most innovative brands on the scene doing just that is Barrell Craft Spirits, which is maybe best known for its award-winning bourbon, but also produces rum, rye, and whiskey.

The Barrell Craft Spirits team sources spirits from more than 65 different suppliers around the world to hone in on the most interesting global flavors, and then brings them back home to Kentucky where they are carefully aged and blended. While this approach is celebrated in Scotch production, it’s rather rare among American whiskey brands and emphasizes Barrell Craft Spirits’ desire to create “batches of whiskey that are truly greater than the sum of their parts.”

Want to learn more? Read on for the eight things you need to know about Barrell Craft Spirits.

The Brand Began Without a Distillery

In 2013, Joe Beatrice founded Barrell Craft Spirits without a distillery. Instead of building his own right off the bat, Beatrice sourced and blended the best casks he could find from established producers around the world. Not only did this allow him more creative freedom, but it also triggered a huge following for his whiskeys — which were all bottled at cask strength.

When bourbon geeks hear the term “cask strength” they know they’re in for a treat, but what about rum lovers? At Barrell, the team puts just as much love into their rums as their whiskeys, and takes extra steps to impart a unique flavor to these spirits. While all of their releases run as “limited editions,” all are bottled at cask strength after making the long journey from the Caribbean to Kentucky.

It Knows Exactly What Kentucky Can Do for Caribbean Rum

When sourcing their spirits, the team generally leans toward traditional Caribbean rums because of their robust flavors. Then, as soon as the casks arrive, they begin a careful re-barreling and finishing regime. This extra time the spirits spend aging in Kentucky’s special climate allows Barrell to impart a unique character that really differentiates these rums from others that never leave the Caribbean.

The Brand Believes in Giving Every Category a Little Extra Attention

Today, Barrell Craft Spirits is celebrated for its unique, dialed-in blending acumen. In 2019, the brand began to apply the same care and technique to its micro-blends and thus created “private release” rum, whiskey, and bourbon offerings to make sure each of those unique — exclusive — blends got the “micro-attention” they needed.

It’s a Hit at the San Francisco World Spirits Competition

With a slew of different awards under its belt, including several appearances on VinePair’s favorite roundups, Barrell Craft Spirits has also won the coveted title of “Best Bourbon” from the San Francisco World Spirits Competition — twice. The brand took home the prize, along with several other titles throughout the years, for its Batch 011 and Batch 021.

It Believes in Every Barrel

The team at Barrell has tasked themselves with becoming the “most creative, forward-thinking, and progressive whiskey blenders in the nation.” This goal permeates through every project the brand takes on, and is especially apparent in the casks they choose for barrel-aging spirits. Take their Armida Bourbon for example, which is finished in Jamaican rum, pear brandy, and Sicilian amaro casks.

At this point, the Barrell Craft Spirits team has made plenty of room for its loved ones, with four family members — Joe Beatrice, his wife, and two daughters — holding key positions within the brand. One of its most popular spirits, and one of only three that are regularly offered, Armida, is also named after Joe Beatrice’s mother.

It’s Got An Infinity Bottle — of Sorts

Most whiskey enthusiasts have heard of an infinity bottle, the last few ounces of assorted whiskeys emptied into one vessel to create a unique blend. Barrell’s Infinite Bottle Project recreates that tradition with a blend created from many whiskey barrels that changes and evolves with every bottling. Each time a portion is bottled, a new whiskey is added to replenish the blend, creating a new, unique “infinite” whiskey. 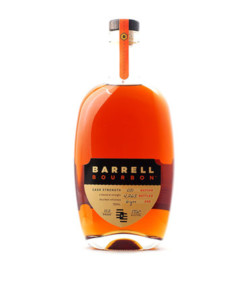