New Year’s Eve is coming, bringing with it hopes for a better future and plenty of alcohol to drown out the past. Most of the people around you are likely drowning the previous year with sparkling wine, but there’s another option for the New Year’s Eve toast: the New Beer’s Eve toast. Simply replace wine with beer and there you have it.

You could *technically* enjoy New Year’s with any beer. But some options are better than others. The following five beers come in large-format bottles; they are more expensive than your average sixer, but also more festive. This beer is one of the few beers made using the method champenoise, the secondary fermentation method used to make world-renowned Champagne sparkling wines. It’s light on the tongue due to its super-fine bubbles, and has some of the malty sweetness of Belgian ales as well as the floral and bready yeast qualities of Champagne. It’s a little on the higher end cost-wise — but then, it did have to travel from Belgium to Champagne then back to Belgium before being shipped out. It’s well worth the cost for a celebration. 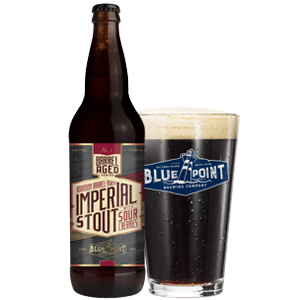 Blue Point’s barrel-aged program is filled with beers to savor. The Russian Imperial Stout has a subtle effervescence that keeps it from feeling as heavy as the pitch-black color would imply. There’s a molasses quality to it and a vanilla sweetness that’s offset by sour cherry. If bourbon barrel isn’t your style (or you need a little variety in your life), Blue Point has a rye whiskey barrel-aged ale and a rum barrel-aged imperial red ale fit for a celebration as well. Don’t think this one is light and sessionable just because pilsner is in the name. The Morimoto Imperial Pilsner is 7.2 percent alcohol by volume, brewed in a traditional style using only four ingredients: pilsner malt, hops, yeast, and water. The end result is a beer that’s a bit sweet on the front end, then hits you with a heavy dose of hoppy grapefruit bitterness till the end. Heads up, this one’s another big, heavy Belgian. The St. Bernardus Abt 12 is a Quadrupel, which is a strong Belgian brown ale traditionally brewed by Belgian monks. The Abt 12 is one of the most recognized quads on the market. It’s unfiltered and has a deep-reddish-black color that hints at the sweet candied fruit and black cherry flavor. At 10.5 percent alcohol by volume, the alcohol is noticeable but not overwhelming. This beer comes with a vintage, and for good reason. It’s a sour ale coming in at around 11 percent alcohol by volume that has been mellowed out by oak barrels previously used to age wine. Casks are blended together for a balanced mix of fruit, acidity, and yeasty notes, just like a fine wine. Also like wine, this beer is fermented first with wine yeasts. It’s unfiltered, cloudy, and just what you need for a New Beer’s Eve toast.