If you’ve ever spent time around a marina, chances are you’re familiar with Mount Gay, a rum that strives to maintain a deep relationship with the sailing community. The brand was also perhaps Barbados’s most well known export until Rihanna took over the world.

Whether you’re familiar with Mount Gay or not, here’s everything you need to know about a brand that’s been distilling rum for more than three centuries. It’s the oldest commercial rum company in the world.

The spirits world loves its superlatives, and Mount Gay can claim one of the most coveted. With a deed of sale for the original plantation dated Feb. 20, 1703, Mount Gay is the oldest continuously operating commercial rum producer in the world. The team at Mount Gay strongly suspects production was going on even earlier, and has recently uncovered a deed from 1654 that might seal the case. Today, Mount Gay produces the majority of Barbadian rum that is exported globally. Old Brigand is another locally popular brand, but it’s not nearly as exported.

It was a Sober family affair for centuries.

Back in 1747, John Sober purchased the plantation and distillery that would come to be known as Mount Gay. That name came from Sober’s friend, Sir John Gay Alleyne, who would eventually manage the rum business. Following his death in 1801, the company was renamed after him. A spot called Mount Alleyne existed on the island at the time, so they settled on his middle name. Nearly two centuries later, the Ward family was the last to live on the distillery grounds before the company was sold to Rémy Cointreau in 1989.

Water and geology are essential.

From a geological perspective, Barbados is different from volcanically formed Caribbean islands. Barbados is actually the product of accumulated and uplifted coral limestone. That means the island has lots of underground water, a key element in what makes Mount Gay unique and why the British decided to focus sugarcane and rum production here in the 17th century. The distillery and plantation grounds are home to a centuries-old, 300-plus-foot well. The water drawn from this well is still used for the distillate and dilution.

Barbados is one of the most densely populated island nations in the world. Hundreds of years ago, Mount Gay could rely on the molasses from local sugar cane for all of its needs, but that’s no longer the case as there simply isn’t enough available land anymore. In addition, while there used to be nearly 40 sugarcane refineries on the island, only one remains active today. So, although the distillery relies on sugarcane sourced from around the Caribbean, it only imports varieties that are native to Barbados.

One such variety in use is BT7782, which translates to bred in Barbados, selected for growth in Trinidad in 1977, and assigned the number 82 during research. 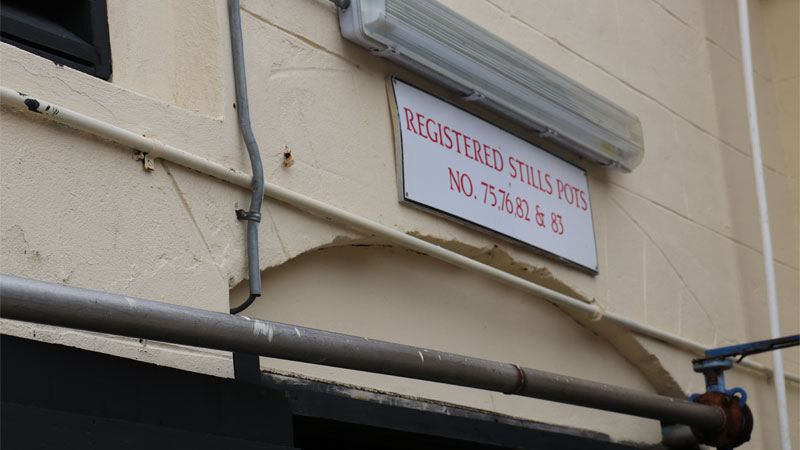 The distillery currently features four different types of stills: small Spanish and Scottish pot stills, a Coffey column still, which was introduced in the 1970s, and the most recent addition, an Irish column still. Though the distillery’s first Coffey still only dates to the 1970s, other column designs were added to the mix around the time of American Prohibition. No matter what still is being used, all distillates are co-fermented (more on that right below).

There’s something familiar in the air.

Mount Gay co-ferments local and imported molasses. The proprietary yeast strain is based off a captured wild yeast, which Mount Gay’s team then bred for consistency.

You’ll know a Mount Gay fan when you see them.

Mount Gay has been closely linked to the world of sailing for decades, as symbolized by its red (often worn-out pink) logo-bearing hat. You can’t buy one — at least not directly from Mount Gay. The only way to get one is to race in one of the scores of regattas that the brand sponsors every year.

The new distiller is a glass-ceiling-breaking powerhouse.

Mount Gay’s current master distiller, Trudiann Branker, is the first woman to run things in the distillery’s history. A native Bajan, she studied Chemistry at Howard University in Washington, D.C., and also has an MBA. Following a five-year apprenticeship under Mount Gay’s previous master distiller, she took on her current role. The first special expression she’s been working on will debut in fall 2019.

There are four main expressions.

Clean and clear Mount Gay Silver is the brand’s entry-level rum, but grab it while you can, because it’s being removed from the American market. Next up is the “Eclipse,” a rum aged up to two years in ex-bourbon barrels. The Black Barrel expression, a mix of pot and column distillates, spends time in repurposed bourbon barrels as well. The XO (extra old), an excellent price-to-quality expression, is a blend of rums that see from eight to 15 years in barrels. Finally, there’s the 1703, a blend that varies from year to year and might include 30-year-old rums. Like all tropically produced spirits, Mount Gay ages nearly three times as quickly as spirits barrel-aged in cooler climates. Around 10 percent of the aging rum is lost to evaporation annually. And there’s a whole lot of rum aging in Mount Gay’s four warehouses. There are three 12,000-barrel facilities and one larger, 13,000-barrel warehouse. The majority of barrels are American oak, including some formerly used for bourbon, but you also find rum aging away in ex-Cognac barrels and new ones made from Andean oak, a species only found in Colombia and Panama.