Today’s craft beer drinkers are used to seeing obscure ingredients on their beer labels. There’s POG, Syrah grape must, habanero, you name it. It’s enough to make you wonder where the line is between beer and beer-like product. But brewers have been putting non-traditional ingredients into beer for more than a century. Case in point: milk stout.

What is Milk Stout?

Milk stouts are dark, thick ales with very low carbonation. In general, they have notes of sweetened coffee, espresso, and chocolate. Milk stouts aren’t cloyingly sweet like candy, but have a subtle sweetness reminiscent of whole milk (as the name suggests).

Do Milk Stouts Have Milk in Them?

Don’t go and replace your morning glass of milk with a milk stout. The beer has the sweetness of milk without all the good stuff. But that wasn’t always believed to be the case.

When milk stouts were first mass produced in England in the early 1900s, they were marketed as healthy and “a tonic for invalids and nursing mothers.” At the time, aged, or “stale,” beers were losing popularity, and fresh, or “mild,” beers were on the up and up. What is young always turns old and stale, however, and the fresh, sweet taste of mild beers dies unless a fountain of youth elixir comes in as a savior. Enter lactose, the sugar found in milk.

What Does Lactose do to Beer?

Lactose is different from that yellow and white bag of Domino sugar in your pantry. It’s easily isolated in whey, the liquid left over from cheese production, and can be turned into lactose sugar crystals. But traditional beer yeasts, just like lactose-intolerant people, find lactose harder to digest than your everyday sugar crystals. So, during the fermentation process, the lactose remains untouched, leaving a sweet, younger-tasting final beer.

However, it’s not that Saccharomyces cerevisiae, the ale yeast used to brew stout, finds lactose entirely impossible to handle. It simply prefers to take the path of least resistance. Saccharomyces cerevisiae has an easy time breaking down sugar molecules like glucose and fructose. Lactose is made up of a combination of glucose and galactose, the latter being less sweet than either glucose or fructose. Beer yeasts need to undergo a special process to break galactose down.

“Yeast can break down galactose by making a group of special proteins,” science journalist Carl Zimmer writes in Discover Magazine. “But it usually doesn’t make them. That’s because galactose is not a particularly good sugar to eat. Give yeast a choice between high-energy glucose and galactose, and it will stick with the glucose.”

Lactose sugar crystals can be added either during the boil or during primary fermentation. The Home Brewers Association’s recipe for a Left Hand Milk Stout clone suggests dumping the lactose in 15 minutes before the end of the 90-minute boil.

Despite the claims of early English brewers, milk stouts are not actually healthy. The beers keep the tasty part of milk (lactose) and get rid of the healthy parts of milk (thiamin, riboflavin, and vitamin B12). World War II-era England took umbrage with that.

In the mid-1940s, the English government ruled that the misleading “milk” statement on milk stout labels had to be removed. In 1996, the battle against labeling milk stouts with the word milk continued. The Food Labelling Regulations of 1996 state that milk “or any other word or description which implies that the food being described contains milk” can’t be used.

The rest of the world seems perfectly content with putting milk on the label, though, and modern brewers are fine with it as well.

What are Some Good Milk Stouts to Try? 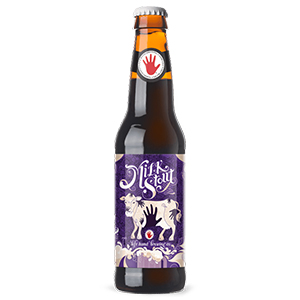 Lancaster was on the forefront of bringing the milk stout style back into popularity. Since 1995, Lancaster has been making a traditional tasty milk stout. One of the most recognizable stouts has gone milk. The new Guinness Milk Stout, one of the brewery’s “brewers project” beers, borrows from Guinness’s long brewing history to create a milk stout that has all the familiar flavors of Guinness Draught with all the subtle sweetness of lactose sugar.