You might think you already know a lot about Maker’s Mark. There’s two reasons for this: The brand is extremely good at marketing, and its bourbon is intentionally unfussy and easy to like.

Turns out there’s a lot more to know about Maker’s, though. The brand helped create and define bourbon culture and style, and, in one instance, even set the pricing. Here are 14 things about Maker’s Mark you need to know.

It all began with fire.

T. William “Bill” Samuels Sr. founded Maker’s Mark with his wife, Margie, in Loretto, Ky., in 1953. The brand began with a fiery act of rebellion: A sixth-generation bourbon distiller, Bill Sr. literally threw the 170-year-old family bourbon recipe into a bucket fire. Some drapes were also said to have burned, and possibly (almost) his daughter’s hair.

According to lore supplied by Bill Samuels Jr., Margie Samuels reportedly described Maker’s rough-hewn bourbon predecessors thusly: “That shit will blow your ears off.” Naturally, the Samuels wanted to distinguish their bourbon from that other, um, stuff, most of which was made with rye in addition to the required 51 percent corn. The Samuels family developed its  new recipe by baking loaves of bread with different grain mixtures as a way to fast-forward taste (instead of waiting out years of aging). They finally settled on a soft red winter wheat, as well as malted barley, in addition to their majority-corn mash bill.

It’s spelled “whisky,” but not to annoy you.

The whiskey/whisky spelling debate is over, right? Because we’ve all moved on, and those of us who haven’t are probably dance-battling it out behind a liquor store somewhere. But just to clarify, Maker’s Mark calls itself “whisky” for the simple reason that Rob Samuels, who settled in what would later become the state of Kentucky in 1780 and was the first of now eight generations of Samuels family distillers, was Scots Irish. And in Scotland, they spell it whisky.

In 1951, while still planning his own distillery, Bill Samuels Sr. brought 11-year-old Bill Jr. along on a business lunch with Pappy Van Winkle himself, who had a tradition of starting lunch with two fingers —two chubby adult fingers — of bourbon. A few follow-up questions: Can you call Child Protective Services 67 years after someone endangered the health of a minor? And, if you’re going to make a kid drink two fingers of bourbon before his PB&J, shouldn’t they be, well, kid fingers? (Bill Jr. did eventually sober up in time to take over the business from his dad, but we’re assuming his fifth-grade homework suffered.)

The distillery cost about as much as freshman year (and gets you way drunker).

When Bill Samuels Sr. bought the distillery that would become Maker’s Mark in Loretto, it cost just $35,000, about the same price as freshman year at a private college for the 2018-2019 school year. Then again, that was in 1953. Adjusted for inflation, the distillery actually cost $331,497, which is more like the cost of a (gently) used yacht. It was the first distillery named a landmark on the National Register of Historic Places, and, obviously, here’s a copy of the Jan. 16, 1980 nomination form for you to drunkenly read from at your next bourbon-fueled party.

Like your last Tuesday night, it has a bit more alcohol than it needs to.

Among many other qualifications — 51 percent corn mash bill, aged in charred new oak, venerated by dudes with special beards — bourbon has to be at least 40 percent ABV. Maker’s Mark clocks in at 45 percent.

America almost broke up with it.

In February 2013, Maker’s Mark announced — in the liquor world’s ballsiest email — that it was literally watering down its bourbon from 45 to 42 percent ABV. America promptly freaked out. In the email, sent to Maker’s Mark “ambassadors” (e.g., besties, long-standing customers, and brand loyalists), they argued they had no choice but to water down the bourbon to meet rising global demand, and oh, also, you all totally won’t notice the difference. We promptly gave them the social media equivalent of the Michael Scott dead eyes look and Maker’s Mark promptly changed its mind.

Most of what distinguishes Maker’s Mark (outside of the caliber of its spirit, of course) comes directly from Margie Samuels, who happens to hold a chemistry degree from the University of Louisville and was the daughter of a Kentucky distiller. Among her definitive marketing choices: red wax seal, bottle shape, and company name (a maker’s mark is what pewter workers use to sign their work). She also came up with the label design, which includes a star for Star Hill Farms, where she and Bill lived; and the letters SIV, which stand for “Samuels” and “IV,” for Bill Sr. being the fourth-generation distiller. (They eventually figured out he was sixth, NBD.) No surprise Margie Samuels was the first woman directly connected to a distillery to be inducted into the Bourbon Hall of Fame.

Margie Samuels also came up with the bottle’s iconic red wax cap, which melts at 350˚F. The first Maker’s bourbon was baptized in a Kentucky kitchen, where the bottle took a dip into red wax melted in Margie’s own deep fryer.

Wax is Brand: Brand is Wax

The wax didn’t just seal the bourbon. It sealed the brand. It gave the comparatively young bourbon a certain venerability (Maker’s was founded in 1953; Jim Beam distilled its first “secret recipe” bourbon in 1795). Still today, bottles are hand-dipped, slowing production from the more average 200 to 400 bottles per hour to 100 to 200 bottles per hour. Yes, there are a lot of wax-dipped Maker’s Mark tchotchkes out there. And yes, you can dip your own bottle and make an adorable video of it for YouTube.

Its barrels go from top to bottom bunk.

Kentucky bourbon distillers move their barrels around throughout the year because warehouses vary in temperature and humidity, affecting how that charred oak, oxygen, and spirit interact. Maker’s Mark is aged for roughly six years, which makes consistency of aging essential. That’s why its barrels spend exactly three summers sizzling in the heat at the top of the warehouse barrel pile before cooling down to age more slowly on the bottom.

It had a cringe-worthy mid-century tagline.

When Maker’s sold its first bottle, in 1958, it charged more than its competitors ($6). So maybe it’s no surprise it ran an ad campaign in 1966 with the tagline “It tastes expensive…and is.” (Gross.) What was surprising, however, is this tagline didn’t tank the company. Sales didn’t skyrocket, either, but the campaign did help Maker’s continue its foray into the new territory of “premium” bourbon.

It was one of the first airplane minis.

Maker’s was one of the first spirits companies to spike your friendly skies. In 1961, Maker’s partnered with American Airlines (Samuels Sr. just happened to know the airline C.E.O., C.R. Smith) to offer bourbon on board.

Fidel Castro was a fan.

Castro randomly loved bourbon, and even asked the mayor of Frankfort, Ky., to bring him a bottle of Maker’s Mark if he ever came to Cuba after his 1978 visit. Sadly, that never happened. 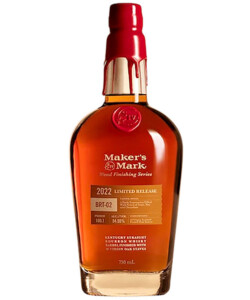 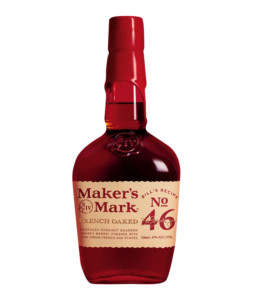 Maker's Mark 46:
This release was developed as Bill Samuels Jr. was stepping down from his post at Maker's Mark, and designed to deliver a profile he has ... 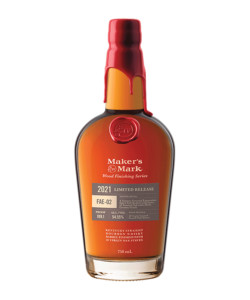