One of five distinct Scotch-producing regions, the picturesque Isle of Islay, notable for its peat-heavy single-malt whiskies, is perhaps the most polarizing. For those who covet the island’s unique style, two iconic distilleries — Laphroaig and Lagavulin — have provided Scotch lovers with more than 200 years of smoky indulgence.

What generally sets Islay Scotch apart is the distiller’s use of peat, a decomposed plant matter that is burned as fuel to dry out malted barley. The process imparts a distinct, and often divisive, flavor into the final product.

Though separated by a mere mile on the island’s south coast, Laphroaig and Lagavulin retain their own individual characteristics. From their storied histories to their unique production styles, keep reading to explore more about these two iconic brands.

Every Scotch Lover Needs This Shirt

Laphroaig was founded in 1815 by brothers Donald and Alexander Johnston, both farmers by trade. Donald acquired sole ownership of the land after buying his brother out, but is believed to have met a tragic end when he accidentally fell into a vat of whisky. The distillery would remain a family operation for more than a hundred years.

Lagavulin began as a collection of 10 small illegal distilleries beginning around 1742. John Johnston, who may or may not have been related to the Laphroaig brothers, took the operation legit in 1816. Later, Archibald Campbell launched a competing distillery next door, but the two operations were eventually united under the name Lagavulin in 1817. The distillery changed hands multiple times until 1887, when Scottish Unionist Peter Mackie helped export the brand to a global audience. Laphroaig and Lagavulin are both single-malt Scotches, meaning they are made entirely with malted barley from a single distillery. The brands’ flagship expressions, Lagavulin 16 Year and the Laphroaig 10 Year are both bottled at 86 proof (for the U.S. market).

While the process of malting is something that most big distilleries outsource, Laphroaig is known for floor malting some of its own barley, as well as hand-cutting its own peat.

Jonathan Wakefield, the sommelier at Table Bay Hotel in Cape Town, South Africa, says both flagship expressions are “heavily peated, smell of sea salt and iodine, [and are] medicinal in flavor,” but differ in the amount of time spent in wood. Lagavulin’s additional six years in the barrel adds to its development, with “hints of cherry and black tea … providing more complexity and a softer finish,” Wakefield says.

For Keegan Terry, the food and beverage supervisor at Belmond Mount Nelson, also in Cape Town, peat and smoke are prevalent in both, but “Lagavulin reminds one of an oaky wood-fire, whereas Laphroaig gives a beachy bonfire smell with extra smokiness [and] a clear ocean scent.” On the palate, Terry adds that Lagavulin shows an “oiliness that coats the palate with a smooth long finish” while Laphroaig has “more vibrancy with floral and tropical flavoring, such as ripe mango, with more sweetness than the Lagavulin.” 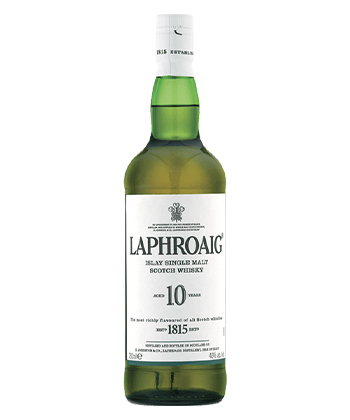 As VinePair reported, using peated Scotch in cocktails can be tricky, and often overpowers any additional ingredients. But bartenders have found creative ways to incorporate smoke into their creations, from rinsing a glass with the spirit to “misting” with an atomizer, or floated atop the classic Penicillin cocktail

For Terry, enjoying Scotch without anything but a large block of cubed ice, or a “single drop of water in a whisky tumbler” is the way to go, and helps to enhance the flavors.

When it comes to comparing the two brands, nostalgia plays a part for Wakefield: “From [my] personal preference and experience, Laphroaig was my first delve into peaty whiskies, and to date is my favorite. However, I would recommend both as they are both beautiful.”

In his dissenting opinion, Terry suggests Lagavulin 16 Year if one isn’t concerned about the price difference. In his take, it’s the more refined of the two, but he still respects Laphroaig: “If you are wanting a more fresh and slightly lighter whisky, with the same amount of smokiness, go for the Laphroaig … also cheaper in price but still great in quality.”

If you can’t decide, Terry’s solution is simple: Buy both. “The Lagavulin should be saved for special occasions, whereas the Laphroaig is a more everyday-by-the-fire type of whisky,” he says.