Boston can be a strange place to live if you’re not at least tangentially involved in higher education, because the social ebb and flow is dictated by academic holidays and micro-seasons unbeknownst to us outsiders. As an Internet Man (rather than a College Man or a Gainfully Employed Man), I am vigorously reminded of all seven National Jelly Doughnut Days, but I’m always completely unprepared for my neighborhood’s quarterly U-Hauls Every Damn Where For No Discernible Reason days.

Late-middle June’s always mercifully quiet, though, occurring as it does between the conclusion of Graduation Double-Fortnight and the dawn of Post-Solstice Ambition Academies For Hyper-Privileged (And To Be Fair, Motivated) Teens. So, a few Sundays ago, Beer Research Director Emily and I took advantage of the tiny window to get out and about in Allston, which is an overwhelmingly collegiate neighborhood even by Boston’s standards. That means it’s full of cruddy, overpriced apartments and the streets are paved in puked-on futons, but it also means you can get a big ol’ can of beer for $3.

We had a grand time bouncing around the various dives, former dives, and aspiring dives we remember fondly and otherwise from our own youth, or at least from last June, and then we (I) ruined everything (for 15 minutes) by suggesting we revisit one of Boston’s first mega-tap beer bars. For over two decades, this place has been rotating in and out approximately 100 draft beers at a time, which impressed the hell out of me way back when I was less old but more dumb. Now I realize it’s nearly impossible to keep that many beers in good working order. Unless a 100-tapper is in the perfect beer-bar location (this one’s not), focused very heavily on styles that age well (nope, IPA as far as the eye can see), or is willing to bite the bullet and dump past-prime beer (heh, good one), the draft menu is going to be a minefield of stale pints.

That stop was largely a waste of a quarter-hour and $15, but I can’t complain because A) I should have known better, and not just because the floor was carpeted and the prices all ended in .99, and B) it did get me thinking about the important matter of just how many taps the ideal bar should have, and just what beer should flow through them.

It’s impossible to determine a universal length for the ideal tap list, because you have to account for variables related to a given bar’s size, sales volume, and customer base, in addition to a dozen other things I haven’t even thought of. And, of course, the matter of just which beers to serve is subject to regional availability and personal preference.

But the Perfect Draft Menu is still fun to think about.  So to get the ball rolling, I’ve outlined my own below, using the following rough guidelines: I’ve settled on 16 taps, envisioning a bar with a limited food menu and around 80 seats; a couple of TVs on the wall, maybe, but they’re only on when there’s a good reason (“ESPN is showing the same golf highlights they’ve been showing for 36 straight hours” is not, for example, a good reason); good liquor, sure, along with the stripped-down kitchen, and perhaps the odd trivia night or live band, but for the most part this is a place where people come to drink beer. This is what they’re having:

Tap 1, House IPA. I’m going to go with Bell’s Two Hearted. I might select something more local to Boston if I were actually opening this bar around the corner from my house, and I recommend your own lists lean local, if you’re so inclined. For the sake of user-friendliness, though, I picked several beers with higher national profiles.

Tap 2, House Pale Ale: Great Divide Denver. This is balanced a bit toward the English direction because the last thing any bar needs is another IPA masquerading as a pale ale. Sierra Nevada Pale Ale will always be available in bottles; for whatever reason, it’s one of the few beers I’m finicky about regarding bottle versus can versus draft.

Tap 3, House Saison: Boulevard Tank 7. The brewery is throwing Tank 7 a 10th birthday party on Thursday, 7/7. One of the oldest, widely distributed American farmhouse ales is still my favorite, though I wouldn’t quibble with a list that favored one a bit gentler than Tank 7’s 8.5-percent ABV.

Tap 4, House Cheapie: I’ll use Narragansett because it’s native to New England and goes for about $3 or $4 a pint here. If you don’t have a local option I’d recommend Schlitz, reserving PBR for tallboys. 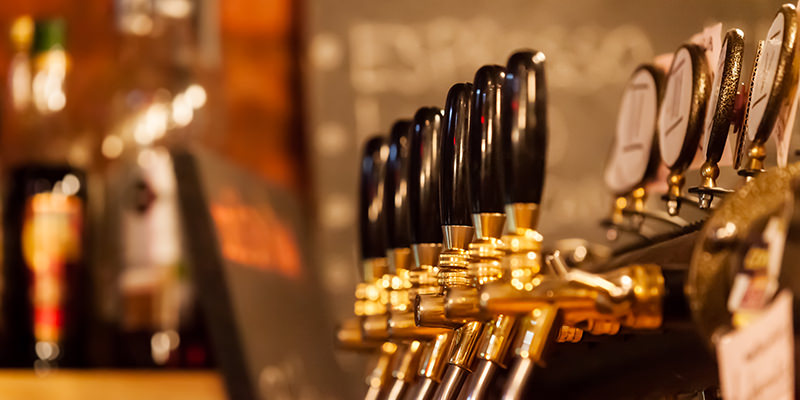 Tap 7, House Blue Moon Alternative: Allagash White. If you’re running a bar to serve the drinking public and to pay your bills rather than to impress beer geeks, then you’ve got to cater to the Blue Moon/Shock Top crowd to a certain extent. Do it! They’re good people, and their money is so, so green. So pick a nice Belgian wit or hefeweizen and blow some minds.

Tap 8, House Session Beer: Coniston Bluebird Bitter. The Notch Pils is a perfect 4-percent ABV, and your house pilsner is likely to be somewhere around there, too, but I needed an excuse to get Bluebird on here.

Tap 9, Rotating IPA: Stone Cali-Belgique. Look, you’re going to need to sell a few different IPAs, like it or not. It’s what the people want. And the people are smart! But I’d advise against just trotting out three or four beers with nearly identical flavor profiles. Use your rotating lines to introduce customers to off-beat IPAs, beers made with wild bacteria or rye or toasted malt or what have you. Sure, fruit extract; the bills don’t pay themselves. In my case, I’m going to open the doors with one of my favorite beers, Cali-Belgique, which is Stone IPA fermented with Belgian yeast.

Tap 10, Rotating IPA: SingleCut Softly Spoken Magic Spells. This 8.6-percent double IPA from Queens is a strong contender for my favorite new beer of the year.

Tap 11, Rotating Local: Cambridge Brewing Company Bullpen Hijinks. I’d like to pick one small, local brewer to always feature on tap. A cool little movie theater near me has a few rotating taps, and one of them is always a CBC beer. I’m going to steal that idea, starting with this delicious gose made with malted sunflower seeds.

Tap 12, Rotating Lager: Great Lakes Dortmunder Gold. I was hesitant to have a rotating lager tap, because I wasn’t sure about putting all lagers under one umbrella. It seems disrespectful. But the fact remains that the vast majority of craft beers are ales, and lager still hasn’t fully shed its bad macro-related reputation, so for now let’s give the entire broad category its own line to shine.

Tap 13, Rotating Legend: New Belgium Fat Tire. It would be fun to cycle through perfectly good beers that the geeks have forgotten about or, worse, become dismissive about. You can go with both venerable flagships like Fat Tire, or even modern icons—I’m sure there will soon be West Coast bars that are too cool for Pliny the Elder. If you find one, open up shop right next door with that as your first Legend.

Tap 15, Rotating Wild Card: Port City Ways and Means. Here’s a good spot to balance out your list a bit. So far we’ve got a couple of high-test IPAs plus an overproof saison, so let’s slide in a rye-based session IPA.

Tap 16, Rotating Craft Superstar: Firestone Walker DBA. This is the flip side of the Rotating Local coin: Pick your favorite among the bigger craft breweries and give them a dedicated tap line. Your customers will always be happy and doubly so if your loyalty gets you in line for special releases. Bar managers are so fickle with their tap handles these days that I’m imaging my local Firestone Walker rep appreciating my consistent business enough for the odd sixtel of Parabola to fall off the truck a couple times a year.

So there’s the opening-day tap list at Will’s BeerHut. What’s your plan?