As a pioneer in the single-barrel bourbon world, Blanton’s knows a thing or two about marketing itself. Namely, those small metal horse stoppers (though Blanton’s Gold stoppers are gold, naturally) that top each of the brand’s bottles make its bourbon stand out on liquor store shelves. But what do they signify, and what is the purpose of this memorabilia?

Blanton’s horses are essentially collectible items. Since the company’s inception in 1984, a horse and mounted jockey has appeared atop every stopper. In 1993, these designs were updated to include more detail.

It wasn’t until 1999 that the official campaign began. Blanton’s — owned by Buffalo Trace Distillery and Sazerac Company — created eight distinct horse and jockey stoppers that now appear on bottles at random. Each stopper has a letter circled on the lower left side to spell out “B-L-A-N-T-O-N-S.” These are visible upon purchase, though some customers claim that some letters are harder to find than others. Still, Blanton’s assures fans that it produces the same number of each every year.

“There are equal numbers of all eight stoppers,” Amy Preske, public relations and events manager at Buffalo Trace Distillery, told The Bourbon Babe in 2012. “They are in random order when they are put on. A lot of people think we must be doing only ‘Os’ or whatever on certain days, but that’s not true, it’s just random.”

Anyone looking to collect all the letters should be wary of certain details, though. Since there are two “Ns” in the name, the second can be found with a colon next to it. Another way to ensure that a collection is complete is by identifying the stance of the horse and jockey on the stopper. The Kentucky-based distiller created these toppers with Derby Days and local heritage in mind, with each one “resembling stages of a horse race” — including a trot, canter, and gallop. The final stopper — “S” — shows the jockey with his fist in the air, celebrating a winning race.

It’s the hope of collecting the entire set that has kept Blanton’s fans seeking out new bottles for the last two decades. There are Reddit threads about finding new letters and second-hand wholesalers offering complete collections for $3,999. 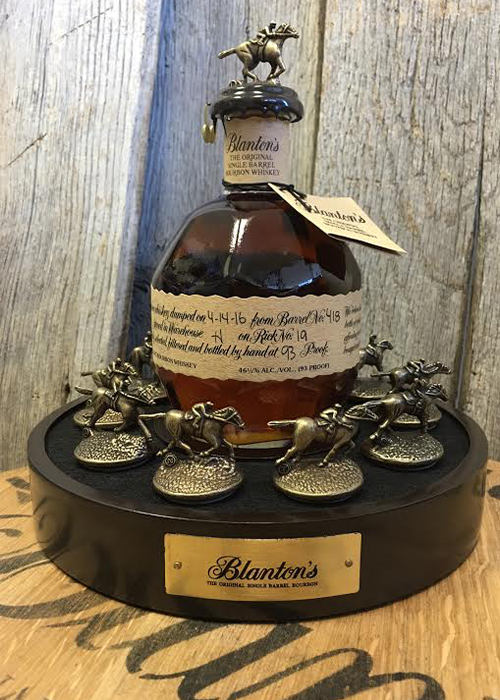 The metal stoppers can be found atop the 375- and 750-milliliter bottles of Blanton’s classic spirits: Blanton’s Single Barrel Bourbon, Blanton’s Gold, and Blanton’s Straight from the Barrel. Those who complete the set can send it off to Buffalo Trace Distillery and get the collection mounted for free on a barrel stave used in the bourbon aging process. The company also sells complete sets of stoppers for $55 since, let’s be honest, trying to collect all the letters can feel a bit like playing the lottery.