Heineken and Stella Artois, two brands that swept Europe with their flagship pale lagers and iconic yet controversial green glass bottles, have become omnipresent in bars and restaurants around the globe.

Now the world’s second largest brewer, Heineken claims to serve 25 million beers every day in 192 countries. In 2020, the company came in second as the world’s most valuable beer brand with a valuation of nearly $7 billion. While Stella Artois can’t boast the same numbers, it’s considered Belgium’s best-selling beer and most successful international brewery, and, in 2019, won the World’s Best International Lager at the World Beer Awards.

Stateside, the numbers show Americans can’t get enough of both brews. According to YouGov, Heineken is currently the fourth-most-popular beer in the U.S., with baby boomers responsible for driving its numbers. And Stella Artois, while more popular among millennials, comes in at No. 7 on the list. Keep reading to learn more about how these two household brands match up.

In 1717, brewmaster Sebastian Artois purchased Den Hoorn, a brewery based in Leuven, Belgium, where he had previously worked as an apprentice. While accounts vary as to the exact date of the historic brewery’s founding, Stella Artois includes the year 1366 on every label.

Following Sebastian’s death, the brewery passed to his wife and son, and later to Albert Marnef, the manager of the brewery and a friend of the Artois family. In 1926, the brewery released Stella Artois as a limited holiday brew, naming it after the Christmas star (Stella is translated to “star” in Latin). The beer was a hit and became a regular offering.

In 1964, the company began exports of Stella Artois across Europe. Today, Stella Artois is owned by the world’s largest brewer, Anheuser-Busch InBev. Heineken drinkers have entrepreneur Gerard Adriaan Heineken to thank for its success. In 1864, Heineken bought the De Hooiberg brewery in Amsterdam and set out to create the perfect lager.

After the brewery was renamed Heineken, a win at the International Maritime Exhibition in 1875 helped propel its sales in the international market, and it soon became France’s most popular export beer.

In the U.S., Heineken’s reign began after it was the first European beer to enter the country following Prohibition’s repeal in 1933. Four years later, exports to the U.S. had grown by 600 percent.

Heineken comes in at 5 percent ABV and is made with “A-yeast,” developed in 1886 by Dr. Hartog Elion at the brewery’s Rotterdam research laboratory. In addition to its flagship beer, the company also produces Heineken Light and Heineken 0.0, which is alcohol-free.

Stella Artois is brewed with Saaz hops, malted barley and water, and is bottled at 5 percent ABV. The company produces Cidre, Solstice Lager, and a limited-edition Midnight Lager. In early 2021, Anheuser-Busch announced that production of Stella Artois would transition from Europe to the U.S. 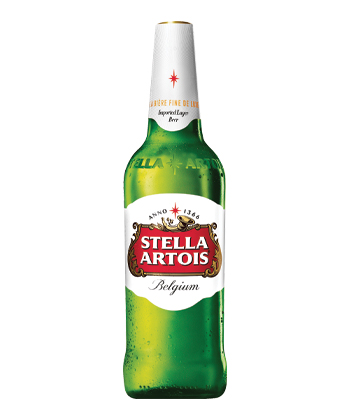 While the beers are similar on the nose with malt, yeast, and mild citrus, Stella is more pronounced with slight vegetal aromas. However, Heineken’s flavors linger longer on the palate and are brighter. On the palate, Stella is lighter with a sweet aftertaste.

According to the Independent, results from a blind taste test conducted by researchers at Stockholm’s School of Economics showed the volunteers could not tell the difference between the two lagers, calling the beers “indistinguishable.”

However, other experts disagree. For Joe Palminteri, the area director of food and beverage for Via Sophia in Washington, D.C., Stella is his choice: “Have it with wings and pizza, or a delicious plate of pasta. [It’s] light and refreshing with a crisp dry finish.” But for one Men’s Health writer, who conducted a blind test between the two lagers, a “fresh, properly stored, unskunked batch” of Heineken won hands down.