Like many of her friends and colleagues in central Virginia, Ashley Reece is passionate about cooking and baking. But unlike most of her neighbors, the Montessori teacher and mother of two occasionally prepares a very unusual recipe: nakládaný hermelín, a type of gooey, marinated soft cheese that serves as a popular beer snack in the atmospheric beer halls of Prague.

“It’s easy to make, we like trying different things, and it is quintessential Czech beer food,” she says. “The only problem is that you have to wait for it to be ready, and when it is opened, it goes in one sitting.”

Would-be beer travelers have long slaked their thirst for great beer destinations like Cologne, Pilsen, and Bamberg with imported versions of the beers from those places. But as the pandemic heads into its third year, would-be beer travelers aren’t just missing the great lagers and ales they remember from overseas. They’re also remembering the various beer snacks they discovered on their journeys — and in many cases, they’re successfully recreating their own versions of those treats at home.

NOT JUST FOR KIDS

Some recipes for Old World beer pairings can take a bit of finesse. The hermelín cheese that Reece encountered while working in Prague after college is not readily available stateside, so Reece successfully made her version using a French Brie; a light rye bread works as a decent substitute for the dense Czech Šumava loaf that traditionally accompanies it. Other recipes can be more straightforward, at least in terms of their ingredients, like the Swabian-style soft pretzels that homebrewer Stefan Berggren makes at his home in Madison, Wis.

“I wanted to make a great pretzel that was worthy, and not some fake, gas station pretzel,” he says. “My old brewing buddy and I have always had a penchant for Germany and its beer culture, so we learned how to make them here.” His favorite ways to serve them are with mustard, he says, or sliced in half and topped with cream cheese and fresh chives.

Although all the ingredients for Berggren’s Swabian pretzel recipe are readily available in the U.S., the preparation does require a bit of care. Before baking, the dough has to be dipped into food-grade lye, a caustic alkaline solution that  requires the use of gloves.

“The hardest thing about making them is to ensure you don’t over-knead the dough,” he says. “And then dipping them into the lye, they get very slippery. If you splash the lye on your skin, it will itch.” But the resulting chewy, doughy, salt-topped pretzel, he says, is definitely worth the trouble.

“We have a rich German heritage here in Wisconsin, and the pretzels are fun to bring to a Packer game or simply enjoy out back with a lager,” he says. “Kids enjoy them just as much as the adults do.” Other traditional beer snacks are much less complicated to make — and yet often just as effective in terms of alleviating feelings of beer-based wanderlust. In Belfast, Northern Ireland, beer lover Brendan Green has been enjoying lockdown ales paired with cheese and celery salt, a common combination in many beer cafés in Belgium.

“My wife and I visited Brugge three years ago, so when I started using celery salt at home, she had a real Proustian moment, and the habit formed,” he says. He usually selects a mild, semi-hard cheese like Emmental, Jarlsberg, or the traditional Gouda, and cuts them into bite-sized cubes served with cocktail toothpicks, just as it’s done throughout Flanders and Wallonia.

Like many beer lovers left without access to good beer during the pandemic, Green created his own personal beer garden at home, serving beer snacks and offering friends draft beer from an array of mini kegs that he sourced locally, including beers from Scotland’s Fyne Ales.

“When the very first lockdown was relaxed somewhat and you could host people in your garden, I invited some close friends over,” he says. “They could pull their own pints, and it went down a treat.”

While a mild cheese topped with celery salt might not be too challenging, other beer pairings can be daunting for the uninitiated. Rob Gallagher is a London-based homebrewer whose favorite beer snack comes from his wife’s homeland in the Czech Republic: the fat, spiced, sweet-and-sour pickled sausage known as utopenec, or “drowned man.”

“I’m not great with food pairings, but it seems to be the perfect thing to go with beer, particularly Czech beer,” he says. “I’m a big fan of pickled things in general, but the spice mix you get with an utopenec makes it a bit more interesting than, say, pickled onion,” he says. “Generally, you get a bit of bread and onions and veg with it, which makes it a fairly substantial snack, but not too much.”

But while utopenec might be one of Gallagher’s favorite bites, his friends in London haven’t always been so keen — perhaps thrown off by its vinegary brine, or the pink, slightly greasy pork.

“When we’ve made utopenec before for people here in England, it’s probably had a 25 percent success rate,” he says. “But the people who like it really like it.” 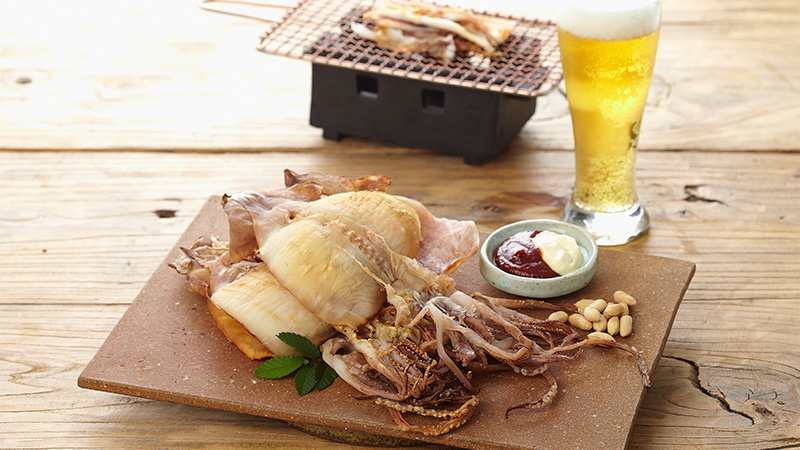 Of course, the traditional brewing heartland of continental Europe is not the only place with memorable beer food. Claudia Asch, a production brewer at Burning Sky Brewery in Sussex, England, developed an intense appreciation for dried squid paired with mugs of beer while living in Korea after college.

“I thought it was weird at first, but it really went well with Korean lager,” she says. “They dry and salt them, which makes for a very chewy snack.” The squid is served whole and flattened, and is meant to be torn apart and dipped into gochujang sauce.

The ubiquity of Korean food shops and corner stores means that it’s not too hard to find dried squid outside the country, Asch says. Despite the availability, she has given thought to making her own version.

“I know where to source it fresh now, but I need to figure out how it would best be done,” she says. “It probably needs good airflow.”