To any unassuming coffee drinker, the sheer number of espresso drinks available on cafe menus these days might be a little overwhelming. Given the somewhat esoteric differences between various combinations of espresso and milk, one could be forgiven for thinking that two popular preparations, the flat white and the latte, are basically the same thing.

While the differences between these two caffeinated staples are somewhat subtle, the fervor for each has ensured that both are ubiquitous in coffee houses around the U.S. Despite their perceived similarities, the flat white and latte inspire extensive debate about their respective merits, origin stories, and preparation methods. Keep reading to learn more about how the flat white and the latte stack up.

Milk and coffee have been enjoyed together in some form of frothy harmony for centuries. While many coffee aficionados point to Italy as the birthplace of the caffè latte, there are accounts that the modern-day latte may have been invented at the now shuttered California-based Caffe Mediterraneum (“The Med”) in 1959.

As Daily Coffee News details, co-owner Lino Meiorin asserts that he invented the drink after customers repeatedly requested additional milk to balance out the intense espresso in his traditional Italian-style cappuccinos. Meiorin, who was trained as a barista in Italy, asked his staff to add more “latte” (milk) to the cup and eventually made the creamy concoction (coined as “caffè latte”), a fixture on The Med’s menu.

The flat white, a standby at many U.S. coffee shops after Starbucks added it to its North American menus in 2015, presents a similarly muddled tale with two countries vying for its legacy. According to The Washington Post, the theory that the flat white was invented in Sydney, Australia, in the 1980s is often disputed by New Zealanders, who claim that the beverage’s modern iteration was actually “perfected” in their country. 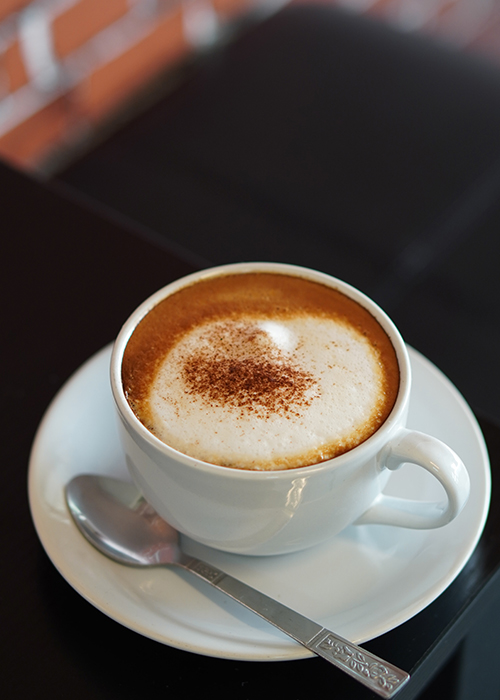 Ask any coffee enthusiast what a proper flat white looks like, and you’re bound to get a different answer. The same can be said for a latte, with variations in preparation depending on where and who makes your drink. Generally speaking, though, flat whites tend to be smaller in size and darker in color than lattes.

Lattes are made with a single or double shot of espresso, combined with a few ounces of steamed milk, and topped off with a thin layer of foam. A flat white often includes two shots of ristretto, a more concentrated espresso that is both strong and sweet. The ristretto is then combined with steamed and “stretched” whole milk that is heated without being aerated, creating a melded texture that is less frothy than the latte.

An article from The Guardian does its best to explain the difference: “The milk [in a flat white] is freely poured in with the espresso meaning the velvety texture of the drink remains consistent throughout, unlike a latte.” The flat white’s inclusion of ristretto really sets it apart from other coffee staples like the latte and cappuccino. According to Thrillist, the use of a concentrated espresso creates a “bolder and even nuttier drink – despite the ample amount of steamed milk.”

As the latte typically includes more milk, the end result is a bit sweeter with a less intense coffee profile, while the flat white has a richer espresso flavor. The wild popularity of lattes in the U.S. has also resulted in numerous seasonal and holiday flavor variations such as vanilla, pumpkin spice, and mocha.