A walk through the bourbon aisle at any liquor store serves a bombardment of names. Jim Beam, Evan Williams, and Elijah Craig are everywhere, but one of the most important names in bourbon history rests on a bottle that is a bit more elusive.

E.H. Taylor Small Batch is a 100-proof, bottled-in-bond bourbon that boasts a rich flavor profile of caramel, butterscotch, and cherry. Like most whiskeys produced by Buffalo Trace, the E.H. Taylor line has become an allocated selection and a prized catch for bourbon hunters. It’s a satisfying and tasty whiskey, but was Taylor really the “founding father of the modern bourbon industry” as the back of the bottle claims?

Born in Kentucky in 1830, Colonel E.H. Taylor Jr. began his professional life as a banker and a commodities trader. “Taylor was very cultured,” says F. Paul Pacult, spirits expert and author of “Buffalo, Barrels, and Bourbon.” “He came from a monied background and was very erudite and eloquent.”

After the Civil War, he shifted his focus to the burgeoning bourbon industry. “He recognized there was a need for rebuilding and that there was a lot of demand for bourbon,” says Clay Risen, journalist and author of “Bourbon: The Story of Kentucky Whiskey.”

Before opening his own distillery, Taylor traveled through Europe. He visited distilleries in Ireland, Scotland, and France, where copper pot stills were prevalent. “He came back totally fired up and inspired by the use of copper,” Pacult says.

In 1867 Taylor opened The Hermitage, his first distillery that was located just south of Frankfort. A few years later he purchased an old distillery nearby on the banks of the Kentucky River, then promptly tore it down and rebuilt it to his exacting standards. “He was convinced that the best whiskey was made only touching copper,” says Nick Laracuente, bourbon archaeologist and archivist at Buffalo Trace distillery. Taylor made sure the fermenting vats were coated with copper and also installed a copper column still. He called his new distillery O.F.C. which stood for Old Fashioned Copper, or Old Fire Copper, depending on which source from the era you choose to believe. “He was a stickler for producing the best whiskey possible — to the point of being an irritating person,” says Pacult. Taylor’s distillery was cutting edge and able to produce bourbon on an industrial scale. He held the facility to a high standard of cleanliness, which was uncommon for the time, and demanded that the floors and fermenting vats were regularly polished.

Beyond the distillation process itself, he was the first to introduce steam-heated warehouses in 1880. This process is still used today in some of Buffalo Trace’s warehouses as a way to help regulate the barrel aging process. “Taylor was a big innovator,” says Laracuente.

When it came to marketing, Taylor was also a natural. “He was great at talking about his whiskey and promoting it,” Risen says. Taylor recognized that the heritage of Kentucky bourbon was what made it unique, and marketed his whiskeys so that they would evoke images of a simpler time. “He understood the consumer was someone with a connection to a brand and wanted to deepen the connection people had with the bourbon he made,” says Risen.

As adept as he was at distilling and marketing, Taylor struggled with the financial side of the business. He was constantly spending money he didn’t have and played fast and loose with the selling of barrels. At one point he double-sold barrels, and when the stiffed purchasers came looking for him he had conveniently absconded to Europe.

“He brought everyone up with him in raising the quality of whiskey,” says Pacult. “But he was also a scoundrel.”

Taylor eventually had to sell his control of the distillery to George T. Stagg in order to save it from bankruptcy. Stagg was a Civil War hero businessman who had invested in the O.F.C. Distillery. Stagg understood the worth of Taylor’s name and promotional prowess and they worked together for several years. But eventually, their personalities clashed to the point where Taylor was forced out of the business.

Lawsuits flew back and forth between the two men for years, one of which focused on the continued use of Taylor’s name and signature by Stagg after his departure from the distillery. Taylor’s ornate signature remains the centerpiece of the label on every bottle of his namesake bourbon to this day.

It was around this time that Taylor began to involve himself more in politics. “He understood better than others that the coming shape of political power was something he could manipulate,” Risen says. He served as mayor of Frankfort, Ky., for multiple terms, but he achieved his greatest political successes at the federal level.

A major thorn in the side of quality bourbon producers at the time was snake oil salesmen and rectifiers, who made inferior, cheap whiskeys. They added ingredients like tobacco and iodine to simulate the effects of barrel aging on bourbon. “He went to Congress and began pleading the case to safeguard the authenticity of Kentucky whiskey,” says Pacult. The result of his lobbying was the Bottled In Bond Act of 1897, which put in place federal protections that defined what was or wasn’t a legitimate product. “It was basically a truth-in-advertising law that still exists today,” says Laracuente. Taylor was also instrumental in getting the Pure Food and Drug Act of 1906 passed, which set even more consumer protections. In a savvy move, he promised to help support and promote the bill in exchange for further regulation of whiskey production.

From Politics to Prohibition

Of course, Taylor couldn’t stay away from distilling for long. Shortly after his ousting from O.F.C., he opened the Old Taylor distillery in 1887. Still inspired by his travels in Europe, the Old Taylor distillery was designed to look like a castle, and the grounds were well manicured and open to the public. “Old Taylor stood out as a place where people were welcome,” says Risen. Visitors would arrive at the distillery to enjoy the gardens, the spring, or the nearby stream, and would be treated to samples of bourbon. “He even built a rail line to help bring customers to the distillery,” says Laracuente. “All 100 years before bourbon tourism became a major draw.” 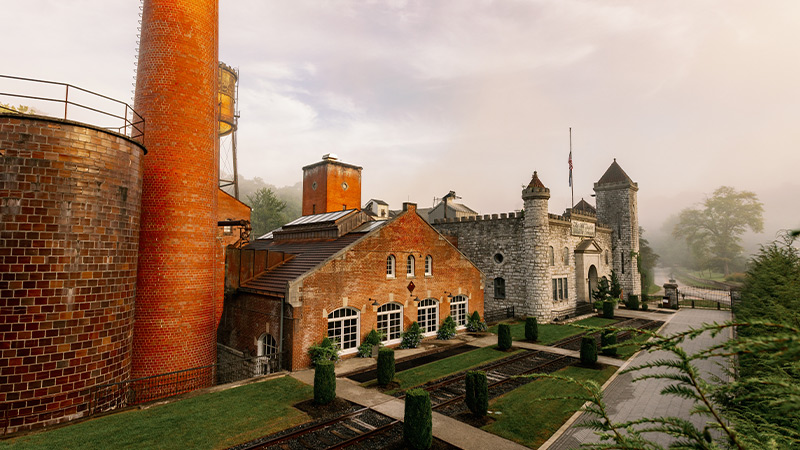 When the Volstead Act was passed and Prohibition arrived in bourbon country, the distilling industry suffered. The former O.F.C. distillery was one of the few allowed to continue to distill “medicinal whiskey,” and survived under the guidance of Albert Blanton. The distillery exists today as Buffalo Trace distillery, and is one of the oldest continuously operating distilleries in the United States.

“Old Taylor wasn’t as fortunate,” says Pacult. The distillery struggled and Taylor did not live long enough to see the repeal of Prohibition. He passed away in 1923, leaving the Old Taylor distillery to his sons. It changed hands many times in the ensuing years, falling under the control of National Distilling and Beam Suntory.

In 1972, distilling was halted on the site, and the facility remained dormant for decades until the grounds were purchased in 2014. The site that had fallen into ruin was rebuilt and reopened, with bourbon production returning under the Castle & Key label. The building and distillery grounds are once again a destination for Kentucky whiskey aficionados.

Immortalized via an iconic brand and a restored distillery, Colonel E.H. Taylor remains one of the most fascinating and influential characters in the history of Kentucky bourbon. “Some of the things he was doing were probably inevitable,” says Risen. “But he stands out as someone who did it well multiple times.”

Taylor’s investment in large-scale, industrial production marked a major shift in whiskey production. His dedication to the promotion of his whiskey along with his distilling innovations helped to raise standards across the industry. The distilleries he founded are still producing great whiskeys nearly a century after his death. And most importantly, the legislation he helped to pass continues to protect the integrity and heritage of Kentucky bourbon.

All things told, it’s hard to argue against the statement printed on the back of every bottle that bears Taylor’s name.