While bourbon can be made in any American state, it is undeniable that the spirit is inherently linked to Kentucky distillers. With limestone filtered mineral water and an abundance of oak trees, which are required for barrel aging, the bluegrass state has ideal conditions for bourbon production and the proof is in the pudding. In 2021 Kentucky distillers broke the regional record for the most barrels of bourbon filled in a year when they filled almost 2.5 million — the third year in a row the total topped two million barrels.

The uptick in bourbon production is likely due to the category’s immense growth over the last two decades due to skyrocketing demand. The spirit’s production in Kentucky has shot up 250 percent since 1999, and the industry is currently undergoing a $5.1 billion capital investment campaign that is set to expand the industry even further. This includes multimillion dollar renovations at distilleries like Jim Beam and Four Roses, and a $1.2 billion expansion of Buffalo Trace.

Despite the fact that the vast majority of bourbon production happens in the state of Kentucky — a whopping 95 percent — many of the companies that own some of the most recognizable names in bourbon are headquartered out of state. In the case of Four Roses, the parent company, Kirin, isn’t even based in the United States and is instead headquartered in Tokyo, Japan.

To complicate matters further, many of your favorite bourbon brands are actually owned by the same parent company. While Buffalo Trace in fact produces its namesake bourbon, the distillery — which is owned by the Sazerac Company — also produces brands like Eagle Rare and Van Winkle. In the case of Jim Beam, one of the top selling bourbons in the world, the brand is owned by parent company Beam Suntory, which also owns brands like Knob Creek and Maker’s Mark.

In order to navigate our way through the labyrinth of bourbon’s and their parent companies, VinePair produced this family tree to demonstrate who owns what in the bourbon world. To make things a bit easier to make sense of, we’ve left out independently owned brands — not only because there are too many to fit on one page, but also because many source rather than distill their own whiskey (although some of the brands in this graphic have, at some point, sourced juice from other distilleries).

Click the chart to open a larger image in a new tab. 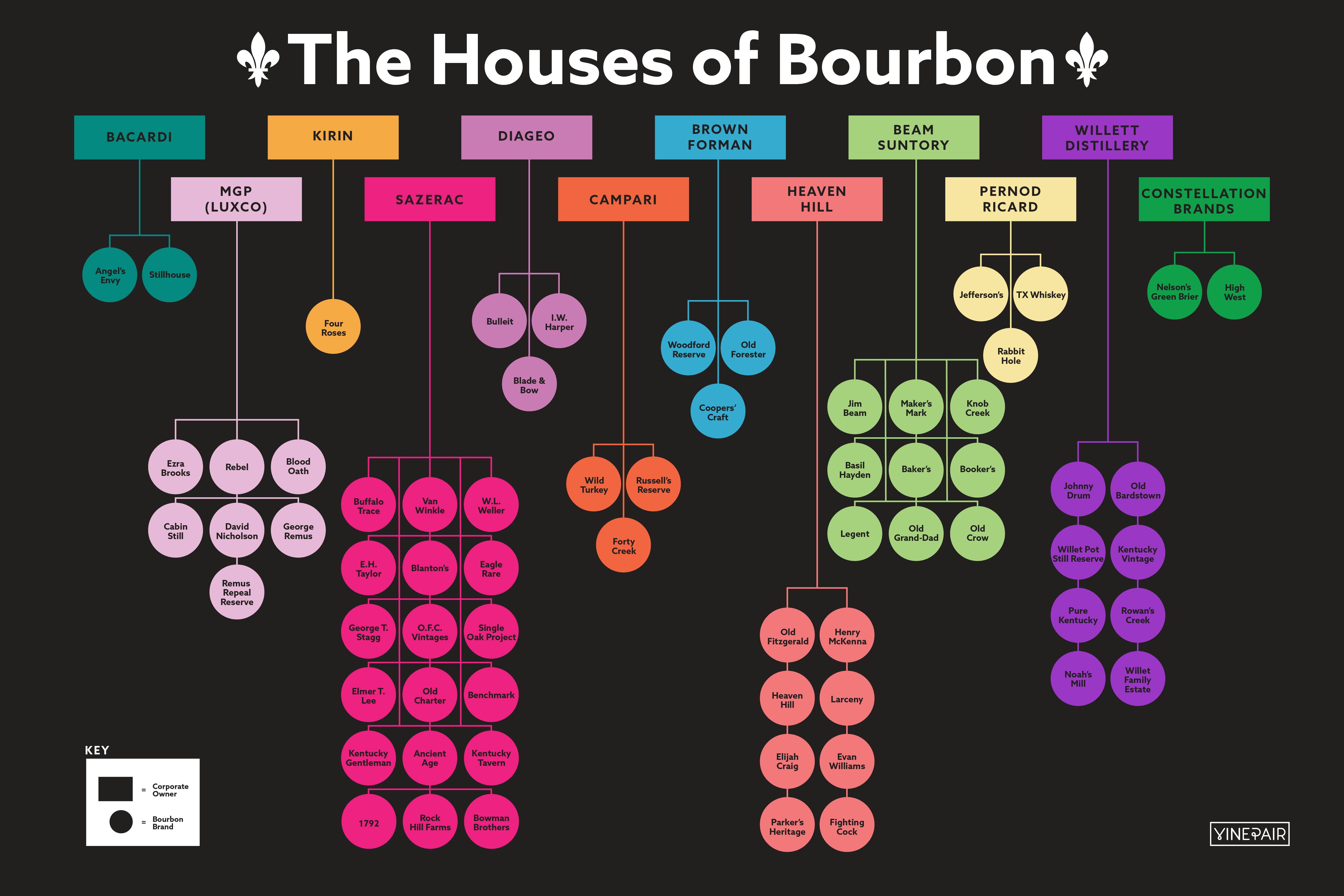