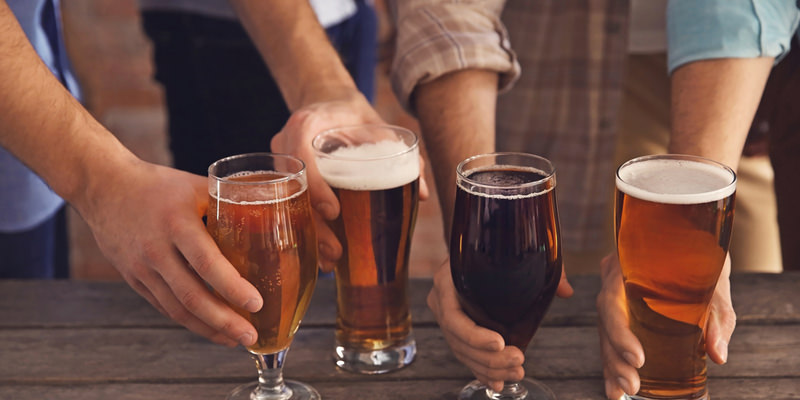 Celeste Beatty’s voice lights up when discussing beer. The founder of the Harlem Brewing Company seems almost taken aback when I ask why she, a woman of color, decided to make brewing beer her passion.

“I like beer,” she tells me with the matter-of-fact tone reserved for teachers telling their students who the former president was. “That’s pretty simple.”

While Beatty acts astonished that anyone would wonder how a Black woman came to be a craft brewer, she herself knows the reality all too well: There is an amazing lack of Black breweries in America, so much so that Beatty can just about rattle them off on two hands. The list includes Garrett Oliver of Brooklyn Brewery and Annie Johnson, a West Coast brewmaster. But for every Beatty, Oliver, and Johnson, there are thousands of “white guys with beards making beer,” as Yiga Miyashiro of San Diego told NPR a few years ago.

Why aren’t there more people of color making craft beer? Others have noted the extreme whiteness of craft brewing. Their analyses tend to focus on the hurdles Black Americans face when attempting business development and expansion, issues largely caused by racism and years of systematic oppression.

But Black people don’t just not brew craft beer; they don’t seem to drink it, either. In 2014, a Nielsen survey found that Black people drank a scant 3.7 percent of all craft beer. That statistic kind of takes the wind out of the sails of the handwringing over #craftbeersowhite. After all, if a community isn’t consuming a product, is it such a mystery that its members aren’t making it? It led me to think: What if the reason Black people aren’t brewing craft beer has less to do with racism, and more to do with the fact that they just don’t drink it?

In other words, the great mystery is not why craft brewing is so white, but why craft beer drinkers are so white. But once you start looking, there are a host of reasons Black Americans don’t drink craft beer – economic reasons, social reasons, regional reasons, and cultural reasons. Even those Black brewers I spoke to who do love craft beer admitted that the trend of making and drinking craft beer simply hasn’t been embraced by the culture as a whole. And maybe there’s nothing wrong with that.

It would be foolish to deny the racism endemic to many American industries. Indeed, the other accounts that blame racism for craft beer’s whiteness are not totally wrong. After all, if a person wants to open a business, they need a business loan, and it’s well documented that Black Americans and Hispanics are far less likely to be approved for business loans, and when they are approved, the loan amount tends to be smaller.

Adam Johnson is the co-founder and creative director of Cajun Fire Brewing Company, the only solely minority-owned brewing company in New Orleans. He faced these exact challenges starting out in the brewing business.

“The wealth required to get this started was huge,” he tells me. “Various programs, certifications, and funding are needed to get over the hump.” And some in the industry simply were not a helpful as they could have been. “For some reason, others in the industry would send us in a circle,” he remembers. “We were catching our tails and time was passing and money was being spent. People would even sometimes not tell us all of the types of machinery we needed to buy.”

But you don’t just need a loan. Beatty faced difficulty finding beer distributors regional to the East Coast that would carry her beer. “If you are a French brewer, it seems much easier for you to make a connection with a distributor than if you are a Black American born right here,” she says.

But Beatty was unwilling to blame racism for this. “People for the most part do take the brands based on the merit,” she tells me. “Is it a good beer? Can they supply it? Et cetera, et cetera.”

The perception that it would be difficult as a Black person to open a brewery runs deep. I recently got a haircut in a predominately Black barbershop in Lakewood, right outside of Cleveland. I asked the patrons about craft beer – whether they liked it, or if they would ever consider brewing their own.

“You can’t be talking about opening breweries in this place when you can’t even get the money to do it in the first place,” one gentleman told me. “Ain’t nobody giving that much money to a Black person, anyway.”

But a third hinted at another reason that craft beer might not be popular among Black people. “Why would I want to waste my time trying to make beer when I can just go and buy it?” he said.

In fact, economics may also explain why Black people don’t drink craft beer. It’s no secret that people of color tend to have far less income than their white counterparts. That’s important because craft beer is expensive. A regular six-pack of craft beer can cost as much as $20; a six-pack of Great Lakes Pale Ale in Cleveland costs nearly as much as a 12-pack of Coors or Miller Light at the same store. If you buy it from the company’s restaurant with your dinner, it could cost considerably more.

Combine those higher costs with a group that historically makes less money, and you may very well find people who would rather just buy a case from the local gas station.

Then there’s the fact that Black Americans drink less alcohol than white Americans. According to a survey by the U.S. Department of Health and Human Services in 2013, 57 percent of whites reported current alcohol use, as opposed to just 43 percent for African Americans.

That statistic is backed up by the U.S. Labor Department, which found that African Americans are still considerably less likely to spend money on alcohol. The average Black household spent just $212 a year on alcohol from 2010 to 2012; compare that to whites, who spent $492 yearly on alcohol. If you’re only spending $212 a year on alcohol (for low-income Black Americans, it’s even lower – just $95 a year), it stands to reason that you’re less likely to spend $12 on a single beer.

Of course, some of those trends are also historical. In a recent study by sociologists at Duke University, researchers found that Black Americans have a lower rate of spending overall than their white counterparts. The study blames things such as less access to credit and, interestingly, a lack of options in Black neighborhoods. Which brings us to the second argument.

Many of the brewers I spoke to, almost all white-owned and operated, note that they don’t see many African Americans or other people of color come into their establishments, despite the fact that their business would surely be welcomed. Is it possible they just don’t like craft beer?

“I love when people say that!” Johnson told me when I asked him. “I think it’s just conditioning of the body and mind.”

It’s not racial but regional, Johnson says. In the South, people across the entire region, not just Black Americans, tend to drink a lighter beer. It’s one of the reasons his craft beer uses a white honey, to make it less heavy for his customers. “It’s just much hotter down here,” Johnson explains. “People prefer to drink a lighter beer when it’s so hot. Add that to the fact that older Black Americans here seem to be comfortable drinking regular light beers.”

Older African Americans, including Johnson’s own father. Despite the fact that the elder Johnson is proud of his son, he still refuses to become attached to craft beer.

“My father straight told me he’s been drinking Miller for 35 years, and said, ‘Son, you’re not going to change it.’ I’m going to keep trying, though,” Johnson says. He believes this is a feat he can accomplish with other Black people across the South, too.

But Johnson’s father’s attitude is a familiar one. In a now-famous audio clip, Black Alabama Congressman Alvin Holmes steadfastly rejects the idea that his constituents in Alabama — who are overwhelmingly Black — would care much for craft beer being sold in the state. Holmes was responding to a proposed change to one of Alabama’s blue laws, which only allows beer to have 6 percent alcohol, making many craft beers — with their high-alcohol content — unsellable. In fact, if you look at the map of blue laws and the map of where African Americans are most likely to reside in the U.S., you’ll find that these laws keep many craft beers out of those areas. In other words, it is basically illegal to sell many craft beers in America’s “Black Belt.”

In a response to legislation that would push for more freedom for craft and high-gravity beers to be sold in Alabama, Holmes was adamant. “What’s wrong with the beer we got?!” he asked incredulously. “The beer we got drinks pretty good, don’t it? I ain’t never heard nobody complain about the beer we have!” Holmes then continues to rattle off some of the more conventional American beer companies such as Budweiser, Miller, and Coors. “It drink pretty good, don’t it? Who sponsored this bill?” Holmes was appalled when he was informed (erroneously) that the foundation sponsoring the bill came from Germany.

In addition to the regional argument and the economic one, Beatty tells me of another reason craft brewing is so rare in the Black community.

“Alcohol is seen as a sort of stigma in our community at times,” she says. “I grew up in a church where you would not even think to have real wine in church.”

It’s a stigma that she says extends from church into the community. “You have to look at this idea in our community that consuming alcohol itself is negative, so you can imagine how negative it seems to a lot of people to even make it.” Beatty tells me a story about a pastor who supports her business and work, but could not do so publicly because of his ties to the church. It’s a story borne out by history, which directly connects the lower rates of intoxication and drinking in the Black community with the rise of the Black church. “It has been noted that the growth of the African American church … had a significant influence on the drinking behaviors of African Americans by promoting abstinence and moderate drinking patterns,” one study found.

But Johnson disagrees with Beatty’s belief that the Black church has been a deterrent for Black people who want to drink beer. “I don’t agree with it at all,” he tells me. “Alcohol has always been in the church. If you come down to New Orleans, you’ll see people carrying their daiquiris with them to church on Sunday.”

Whether or not the church was and remains a big deterrent, it seems indisputable that the Black community has refused to embrace craft beer.

But… why is this a problem? After all, it’s not incumbent on African Americans to adopt all the culture of their white counterparts. While some may enjoy the taste of craft beer, it’s a grave disservice to African Americans to have the brewing and drinking of craft beer forced upon them. And in some ways, to blame racism for Black Americans not reaching for craft beer is to claim that there is something wrong with a community for refusing a certain product. Of course, racism must be eradicated from business practices like granting business loans. But it also makes a lot of sense that members of a community that consumes just 3.7 percent of craft beer might not be flocking to produce it.

Maybe it’s time to allow Black Americans to decide for themselves what to drink. Rather than bemoan that, it’s time to embrace it.