Via ZX Ventures, AB InBev invests in dozens of beer and beer-adjacent businesses. This includes online retailers, delivery services, and publishers, along with other consumer products. As with AB InBev’s oft-bemoaned acquisitions of craft breweries like Goose Island and Wicked Weed, many brewers and RateBeer users lamented the sale, citing the inherent bias of a corporation owning user-driven content.

Favoritism is the least of our worries, though. By acquiring RateBeer, AB InBev now owns a treasure trove of data, including the preferences and locations of active and passionate beer drinkers. One corporation now has the power to watch, analyze, predict, and, eventually, create the beers we like by using data many of us volunteered willingly under different circumstances.

“Data is powerful, and with massive amounts of data, insights can be pulled to improve one’s market position and to better understand the actual users of the platform,” Fern Stroud, CEO of Stroud Management Enterprises, and senior program manager at a digital ad tech agency in San Francisco, tells VinePair. “Data is king.”

RateBeer launched in 2000 as a platform for beer lovers to share opinions on beers and beer-drinking establishments. In June 2017, co-founder Joe Tucker announced RateBeer had accepted investment from ZX Ventures, a “global growth and innovation group” owned by AB InBev. On Feb. 3, 2019, he announced the complete sale: “ZX Ventures, a division of AB InBev, has fully acquired RateBeer.”

Guthrie Collin, SVP of advertising product & technology at Dow Jones, publisher of The Wall Street Journal, and professor at NYU Stern, compares AB InBev’s acquisition of RateBeer to Amazon’s early acquisition of Goodreads. “Both acquisitions provide the acquirers with data generated by passionate, influential ‘heavy user’ communities dedicated to providing unbiased and crowd-sourced reviews and commentary on the acquirer’s key segment,” Collin writes VinePair. “In AB InBev’s case, this is their second round with RateBeer, after making a strategic investment a few years back, and the full acquisition indicates they have tested and learned that the RateBeer data set provides important signals to drive business growth.”

Acquisitions such as these are not rare in the tech space, where near-identical companies like Grubhub and Seamless merge and consumers barely notice. But RateBeer was different.

“A sad, sad day,” wrote Maakun, a RateBeer “Regular” from Den Haag, Netherlands, after the initial investment in June 2017. “Yikes,” wrote minutematt, whose reviews largely comprise beers in the U.K. And from a RateBeer “quality person,” herrklemann, “Finally my ratings are fully owned by one of the big players. So glad for all the unpaid work of the past few years.”

RateBeer kept its initial sale secret for nearly a year. Tucker publicly announced ZX Ventures’ investment in his company in June 2017, but it had actually occurred in October 2016.

“The beer community heavily relies on beer review sites like ours to help guide them,” Todd Alström, founder of BeerAdvocate, a beer publisher and review site, and RateBeer competitor, tells VinePair in an email. BeerAdvocate, founded in 1996, is independently owned, and its business includes print and digital magazines, events, and beer ratings.

Some brewers also oppose the acquisition. Dogfish Head Craft Brewery founder Sam Calagione issued a statement on June 5, 2017 asking RateBeer to remove any of the brewery’s data from its platform.

“It just doesn’t seem right for a brewer of any kind to be in a position to potentially manipulate what consumers are hearing and saying about beers, how they are rated and which ones are receiving extra publicity on what might appear to be a legitimate, 100 percent user-generated platform,” Calagione wrote in a blog post on Dogfish Head’s website. “It is our opinion that this initiative and others are ethically dubious and that the lack of transparency is troubling.”

“We don’t want our consumers to feel like they are being deceived or misinformed in any way,” Bear Republic wrote on its website on June 7, 2017. “For everyone who shares our belief, we hope that you will consider utilizing another platform to share your beer opinions and reviews.”

According to Alström, some did. “We did see a spike in new users and activity after both the initial and full buyout announcements,” he writes. 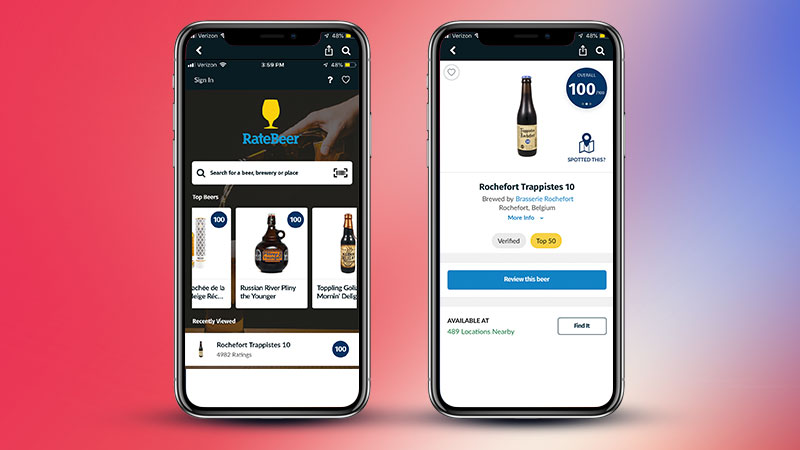 “It’s important for sites like ours to remain independent in order to keep our integrity and trust intact,” Alström writes. “That said, bills need to get paid, and being independent doesn’t necessarily pay those bills.”

Some are willing to sink with their ships. Others aren’t. For RateBeer, investment from ZX Ventures allowed “improvements to infrastructure … an in-house mobile app,” and other updates “that as the only full-time employee with help from some amazing admins and volunteer coders, I was never able to tackle,” Tucker wrote in his February 2019 announcement. Improvements come at a cost.

“The question truly becomes, how many users does this platform really have and how much data are they truly providing?” Stroud says.

By comparison, BeerAdvocate.com reaches more than 3 million unique visitors every month. Untappd, another competitor popular for its gamification of beer ratings (read: ticker culture), has more than 7 million users.

“In essence, ZX Ventures now has a ton of data on the insights of actual consumers — on what [beers] they like, and why they like them. This data could be used in so many different ways,” Stroud says. For example, he says, if AB InBev produces a beer similar to a competitor’s, and the competitor’s outperforms its own, it can make adjustments accordingly. As the owner of that data, “I could now do some reverse engineering to figure out how to improve my beer recipes,” she says. Tweak a hop, perhaps, or swap out a specialty malt.

“The data are valuable because they provide insights into the brand and beer varietal preferences of lead users and beer enthusiasts,” Jason Greenberg, assistant professor of management, New York University Stern School of Business, tells VinePair. “In turn, their ratings information drives consumption choices of other consumers.”

In a paper titled “The (Internet) Information Inequality Machine?” Greenberg posits that, while “ratings can enrich our lives by helping us decide” on what and where to eat or drink, increased accessibility of this information could result in increasing inequality between firms. AB InBev owning an ocean of consumer data allows it to stay ahead of the curve, while small or independent labels — those that may have created the trends to begin with — could get washed ashore.

“AB InBev now has location data of beer users, and can target specific beer types in those geolocations,” Stroud says. “This could directly impact sales.”

Is an imperial stout with vanilla and coconut ranking high in Napa but not in San Diego? “They can take other beers out of areas with lesser rating[s],” Stroud says.

Additionally, Greenberg says, “they might also use the platform for data experiments and advertising.” He compares this to “the sorts of subtle experimental tests Facebook has employed … to determine how individuals influence each other. In this case, it could simply mean randomly manipulating some characteristic of a beer to see how it impacts ratings, and then sales.”

Back to that vanilla coconut stout: Are Napa reviewers responding better to vanilla extract or vanilla beans? Vanilla from Indonesia, or Madagascar?

It’s worth noting that most brewers are likely monitoring beer reviews to some extent.

“I don’t think brewers really knew what customers wanted until, really, the advent of things like RateBeer and BeerAdvocate,” Sam Richardson, co-founder of Other Half Brewing in Brooklyn, said on the Craft Beer & Brewing podcast in February 2019. “[W]e’re not doing our due diligence on trying to make better products if we don’t look to see what people are excited about.”

There is a difference, though, between looking and recording, as well as the scale to which this information can be used. AB InBev operates 227 breweries and 13,000 retail locations around the world. It also has its own distributors, online retailers, delivery services, homebrewing equipment, hop farms, and beer publishers. Now, it owns our opinions — and we signed up for it.

AB InBev not only has its own robust research and development; it has everyone else’s, too.

The Future Is Beer

According to a recent survey conducted by the Society of Independent Brewers, 98 percent of respondents believe global breweries like Anheuser-Busch InBev cannot make craft beer.  And yet, as Heineken head of craft development Jan-Willem Heeg told The Guardian, “Whether it’s ‘craft’ is really in the eye of the beholder.”

What if craft brewers’ creations, and the opinions of their consumers, are being analyzed by the same corporation?

“Because of their smaller scale, independent brewers are closer to their customers, listen regularly and intently to their needs, and can quickly spot emerging trends in their marketplaces,” Collin writes. “With RateBeer.com, AB InBev now has this same listening channel for consumer attitudes across the entire beer marketplace.”

Once a resource for avid beer consumers, and a digital window into their preferences, the platform becomes a database of “crowdsourced reviews and commentary on the acquirer’s key segment,” Collin writes.