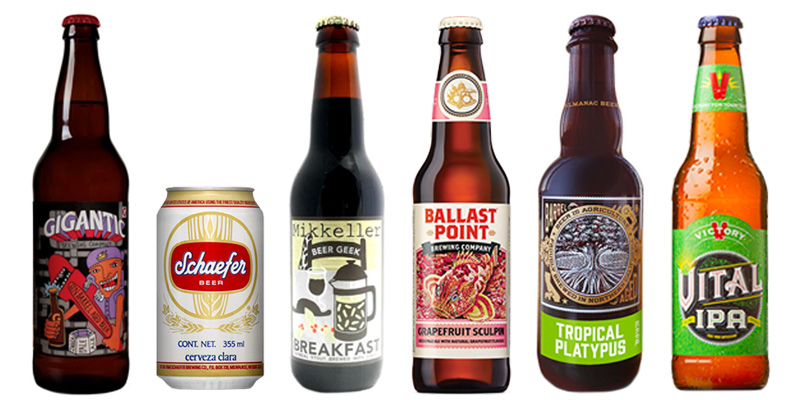 Let’s start with the bad news: Beer is not, in fact, the breakfast of champions, for the simple and devastating reason that life is not a sassy T-shirt slogan.

But that doesn’t mean beer is exclusively for the ne’er-do-well’s breakfast table. Plenty of occasional-do-wells have also been known to partake of an a.m. brew or two under a variety of special circumstances, including but not limited to: vacation (especially if the vacation involves camping, climbing or anything else inherently dispiriting); Saturday morning full of errands that happen to leave you free for a pint’s worth of time in close proximity to a friendly bar; garden-variety weekend bender gets accidentally extended into Monday and you know you’ve got to go to bed super-early that night to begin righting the ship, so might as well get your last hurrah in before noon; or what have you.

Note that third-shift work was exempted from our list of reasons to have beer for breakfast. Although overnighters are the backbone of the early-morning bar economy, their sunrise beers aren’t breakfast in any meaningful sense: No gainfully employed soul ever needs an excuse to drink right after she’s put in her eight hours. But those of us with more traditional work schedules, who ought to be someplace other than a barstool at 9 on a Wednesday morning? Well, we could use a reason. Thankfully, those are easy enough to find if you know where to look. Appropriate beers for the occasion are simple to spot if you put some effort in, too. Or if you just read the list below. Humble, healthful oatmeal is a cheap and easy way for an honest man to get a nutritious start to his morning. Alternatively, oats add texture and body to a lot of our better beers, such as this coffee-infused stout. Nothing from Mikkeller is humble, cheap or easy, but Beer Geek Breakfast’s combination of dark chocolate, subtle-for-the-style coffee, and slightly sweet spice notes will surely boost the mental health of anyone lucky enough to cross its path early in the day. Schaefer bills itself as America’s oldest lager, which would be easier to credit if it still existed in anything approaching its original form. I have no idea if the Schaefer currently pumped out by Pabst bears any resemblance to the original 19th–century New York City beer of the same name, but I do know it’s a perfect 12-ounce can to rehydrate with after a short jog from your hotel to the Spring Lounge in Manhattan at 8:30 on a chilly Friday morning. As an extra bonus, it is likely made with some measure of corn — it certainly tastes like it — as are many popular breakfast foods such as Doritos and, presumably, Corn Flakes. Eh, second morning I ran down to the Spring Lounge I asked for Bell’s Two Hearted and the bartender gave me a Grapefruit Sculpin instead. Which is basically a Mimosa, and therefore a socially acceptable thing to drink before risking solid food on a Saturday morning! It’s also a lot better than I’ve given it mental credit for lately. That bitter West Coast resin is still there, augmented by strong but not overwhelming grapefruit (aka, vitamins). This is a deceptively complex American pale ale with a healthy measure of rye lending spicy gravitas to the floral and citrus notes from the Centennial hops. It also has the ideal early-morning alcohol content: just enough to jump-start your day without making it too likely that you’ll tumble off into the sea before the second Showcase Showdown. Turns out they make some pretty good beer in the other Portland, too, such as this imperial IPA that’s aged for three months in Ransom Old Tom gin barrels. Pipewrench is an ambitious beer that’s perfect for juicing a little motivation into any day that starts on a barstool, with creamy lemon, juniper, caper, and coriander complementing straightforward citrusy hops. In darker moments, I regard coffee porters the same way I do fruited IPAs: When the special guest ingredient is subtle and well integrated, I’m less impressed than I would be with a beer that produced similar flavors without leaning on obvious adjuncts; and when the additive takes over the beer in a way that no amount of roasted barley or modern hopping could, then I wonder the point in starting with a beer base in the first place. However, when I’m feeling secure and well-adjusted and buzzed before lunch, I can really appreciate the gentle, bittersweet coffee edge the cold-brewed Camano Coffee lends this thoughtful, balanced porter from an island off the Washington coast. I’m a big Almanac fan, and this might be the best that I’ve tried. Tropical Platypus is a dry-hopped wild blonde ale aged in wine barrels and boosted with a bunch of tropical stuff. The tart kiwi, mango, lime and passion fruit make it a veritable fruit salad of a beer that provides vital nutrients you need when you’re in it for the long haul. Vital is the ideal breakfast beer, because it reminds you that to drink* while others toil is to truly be alive. This is my favorite IPA from a deeply underrated brewery, and it showcases a judicious blend of classic German malt along with earthy-pine bitterness and sweet citrus from the Chinook, Simcoe, and Citra hops.

*In moderation! Sometimes, but not very often!