Wheat beers get a knee-jerk reaction, and it’s not a positive one (thanks, Blue Moon). But don’t write off the entire lineup of beers made from the world’s most common grain. Wheat beer has a golden savior and it flies by the name of white ale. A good white ale, also known as witbier, is a low-alcohol wheat beer. It’s lightly carbonated and tastes like amber waves of grain punctuated by spice and orange groves. It’s as summer as Corona with enough weight for the winter months. The beauty of the white ale lies in its simplicity. They’re steeped in a long history, but that history did not leave them with the flavorless yawn of other traditional beers (sorry Reinheitsgebot). They’re also what you should be drinking right this minute. Here are the seven best white ales to always have on hand. One of the best Belgian style white ales comes from Japan. There’s some nutmeg flavor to go along with the orange peel and coriander, and it pours a hazy yellow, the color of the wheat it came from. Many white ale and witbier aficionados consider the style as more of a summer choice. Not so fast. Icelandic White Ale is good year-round and plays well with food. Break it out in the cold months and you’ll be as content as if you were in an Icelandic hot spring. Bell’s breaks tradition and skips the spices with its white ale, but there is plenty of flavor here. It’s on the heavier side as far as the style goes, but not in a bad way. Switch this out for that porter you drank every other day of winter. 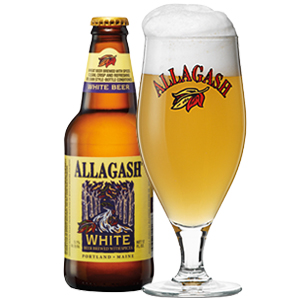 This white ale is much more than its name suggests. It’s been brewed the same way since Allagash started making its own take on the style in 1995, and it hasn’t gotten old yet. Allagash uses Curaçao orange peel, which is a bit more bitter, as well as a secret spice less well- guarded than Coca Cola’s secret ingredients, but much tastier. 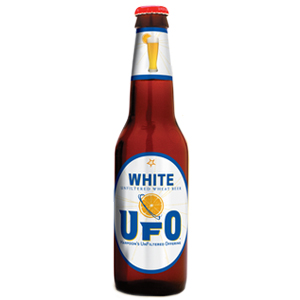 UFO White has the type of complexity that makes you wonder what you just put in your mouth. It’s a white ale that exhibits a subtle expression of coriander muddled into orange peel. The color resembles muddy pond water backlit and warmed by the sun, thanks to its unfiltered nature. It’s a little on the sweeter side, yet flavorful and well-rounded enough to want a refill. Ommegang goes with the name “Witte” for its white ale, which is Flemish for white. It uses a mix of both malted and unmalted wheat, and opts for sweet orange peel. It’s light and refreshing and perfect for a hot summer day (or a cold winter day when you want to reminisce on the dog days of summer). Namaste is bursting with lemongrass and orange. It’s on the more refreshing side of the white-ale scale, but no promises it’s actually “bursting with good karma” as Dogfish Head suggests on its website.