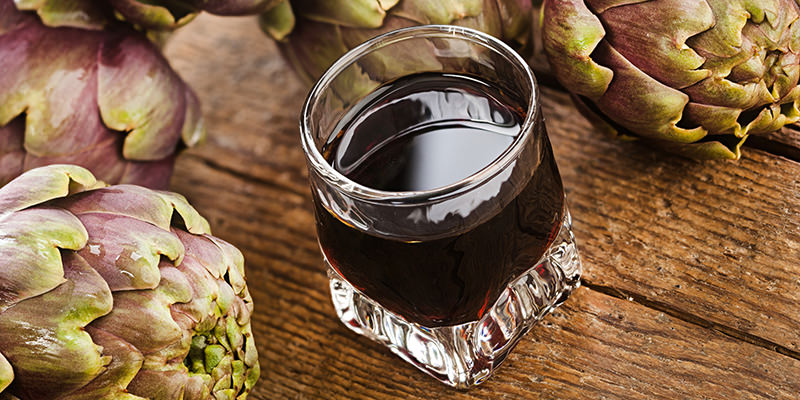 Artichokes. Is it like, vegetally correct, to say they’re weird? They look like something that specifically should not be eaten. Then again, we live in a society that eats lobsters, chickens, and these guys. We have to assume, in the history of hunger, there’s always been some brave guy or gal who sees a thing that’s terrifying, spiny, and in this case, literally full of “choke,” and eats it. So why not drink it?

Much like the terrifying sea robot otherwise known as lobster, artichokes are incredibly delicious once you tackle the whole “rough outer coating and potential esophageal damage” thing. Also, like lobster, they’re an incredibly good vehicle for lemon butter (which for some reason does not have its own square in the food pyramid). But pretty much nobody on earth could guess that some resourceful Italians would look at an artichoke—really, look at it—and think “Yeah. I gotta drink that.” And that’s why we have Cynar (that “C” is pronounced like Cheetos, not syrup: chee-nar). A mixologist favorite, though never quite as hip as Fernet, Cynar is a bittersweet Italian amari, which in regular person shorthand means a highly aromatic and often herbal/menthol/spicy/woody tasting alcohol, usually of higher ABV than wine and traditionally consumed after dinner. Or a long shift at a bar. We like to think of such products as “storied,” having some ancient forest mystery to them, possibly healing powers, maybe the ability to make us better dancers. But Cynar was actually created in the ‘50s, by a Venetian businessman named Angello Dalle Molle, and hyped by a famous Italian actor in commercials that, while we can’t translate, seem more awesome than anything we saw during the Super Bowl.

The major question: why artichoke? According to FoodMatters.tv, there’s some evidence that artichoke is actually helpful to digestion (which is the point of a digestivo, not just “another way to keep drinking”). The ancient Greeks and Romans supposedly ate artichokes to aid digestion. If you need more evidence, Martha Stewart herself (or likely one of her terrified interns) notes that the compounds in artichokes can aid the liver in its daily duties of removing toxins, which, god help our livers, is awesome. It also has the effect of making other things taste sweeter, which, in the spicy blurry context of a digestivo, sounds fairly useful.

And then there’s the fact that the artichoke flavor isn’t actually so intense that you’ll feel like you’re drinking vegetables. Yes, it’s a bitter, vegetal Italian liqueur, but then again, Campari tastes like angry grapefruit and Fernet Branca tastes like if The Hulk ate some Mentos, then angrily spit them out. And yet these things make incredible additions to cocktails, bringing depth and tang and spice (in the case of Cynar) to the table, usually for a pretty good price. Not to mention, straight freak out points. Cuz there’s an artichoke on the bottle.

If your curiosity is piqued, and you’re not quite terrified, here are some Cynar cocktails. There’s depth, earth, spice, and even sweet brightness in this liqueur. (Don’t fear the choke.)