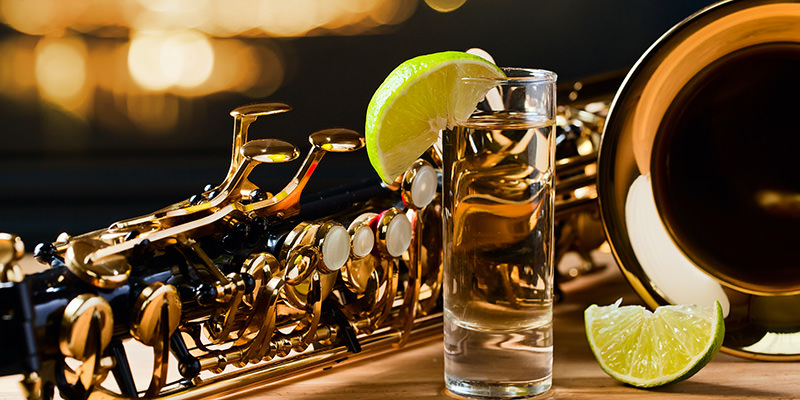 You may not have heard it in…well, an extremely long time, but you still probably remember a few things about the song “Tequila.” Number one, it has exactly one lyric, repeated three times. Number two, it seemed to be around for a while when we were all a lot younger and then suddenly disappeared into the ether, possibly in coincidental conjunction with the release of “Jagged Little Pill.” And number three, it is a reliable way to avoid imminent assassination by a biker gang (but only if you’re Pee Wee Herman). (Also, remember that dance? Gonna try that in the clubs this weekend.)

But the background of the song is a bit more elaborate than that. For a song that was absolutely everywhere for a really long time (especially, again, considering—three words), it was never intended to get much notice.

It all starts with Challenge Records, which just so happened to be American country hero Gene Autry’s record label (in case you didn’t know, the prolific Autry was a singer, actor, and author of The Cowboy Code, which for some reason is not written up at all bars everywhere). Autry had signed a gentleman by the name of Dave Burgess, AKA Dave “Dupree,” and sorely needed a hit. Dupree and the Flores Trio (we’ll get to them) recorded “Train to Nowhere,” the Side A—or the more important track—and needed something for Side B.

Ask anyone who ever bought a single on cassette tape (imagine if individual iTunes songs were small plastic rectangles with easily tangled plastic film holding the music—yeah, that’s how it worked). Side B was typically the far less exciting side, the musical buttress holding aloft the incredible opus that was Side A. It’s like the “Hold On” to “Free Your Mind.” Not that those were actually corresponding sides of a single. But yeah, you’re not buying a single for Side B. Ever.

Except in the case of “Train to Nowhere.” To fill in the empty Side B, the studio arranged what became known as the Flores Trio—Danny Flores, Buddy Bruce, and Gene Alden—who recorded a catchy instrumental song with a mambo rock flair that Flores had put together. It was called (you guessed it) “Tequila.” One word, three times, and some instruments, nothing to write home about. Right?

Except this was an era where musical tastes were changing, morphing really, where Dupree’s admittedly funky “Train to Nowhere” was less exciting than the “dirty sax” solo Flores belted out in the midst of the comparatively unrestrained “Tequila.” Not to mention the bare, unavoidably sinful implications of nearly growling the name of a liquor three times. If brainwashing were always this catchy, we’d be super into it. (Or wait, yeah, we guess it is.)

“Tequila” went to No. 1 on the Billboard Chart in March of 1958, just over two months after it was recorded, and won a Grammy Award in 1959 (according to Chris Epting’s Rock ‘n’ Roll in Orange County, the first Grammy for a rock ‘n roll song, ever). The Flores Trio—Danny Flores is that seductive, husky voice not-so-subliminally messaging us to drink tequila—became “The Champs” after the song was released. But just as fickly as fate deemed “Tequila” a success, it also deemed The Champs a one-hit wonder. Their follow up, the aptly named “Too Much Tequila,” didn’t do nearly as well, maybe because it was far more musically restrained—though musically proficient, and even a little tequila-true-woozy, a bit on the “hold music” side of things?

But even if The Champs rose and fell in the wake of a three-word liquor jam, it’s still one of the catchiest—annoyingly catchiest—songs in musical history. So much so that it made the leap from radio and TV to film. As we’ve seen, Pee Wee uses it to escape certain biker death, the Teenage Mutant Ninja Turtles get silly (and kind of disappoint Splinter) while dancing to it, and—perhaps everyone’s favorite—the kids from The Sandlot retch to it after eating chewing tobacco and riding a roller coaster.

If there’s a song you can appropriately barf to, it’s gotta be named “Tequila.”