When it comes to craft beer, porters and stouts often find themselves taking a back seat to almost every other style. And that’s a shame, because when made well, porters and stouts can be absolutely delicious. The problem is, there are also porters and stouts out there that aren’t so great, whether they’re too high in alcohol, a bit too overly flavored, or just not that good. So we decided to separate the best from the rest.

VinePair put out an open call to breweries across the country, asking them to submit their porters and stouts – we received over 100 submissions from small regional breweries as well as industry behemoths such as Rogue, Sam Adams and Brooklyn Brewery. We then convened a group of twenty readers at Alphabet City Beer Company in New York City to taste and rate the submitted beers.

While all of the readers in attendance were beer fans, many readily admitted that they drink porters and stouts only on the rarest of occasions. The reasons given for this were the perceived heaviness of the beers, the high alcohol content often associated with them – though many also admitted to loving imperial IPAs – and the fact that porters and stouts seemed harder to drink throughout the year than other styles. All, however, did admit to enjoying these beers when they did have them.

Because porters and stouts seem to come in so many different varieties and alcohol levels, for this tasting we divided the beers into categories. First we tasted the pure porters and stouts, then the beers that had flavorings – coffee, chocolate, coconut and oatmeal – and finally the imperials. All of the beers were tasted blind and rated on a scale of 1-10, with 1 being terrible and 10 being delicious.

One of the most interesting results to come out of the tasting was that many of the beers that have historically received the highest ratings on sites such as Beer Advocate and RateBeer, did not fare as well as we thought they would when tasted blind against more recent offerings. One hypothesis for why this could be stems from the fact that these rating sites inadvertently reward early entrants to any new beer category – some of the first celebrated IPAs for example still have some of the highest ratings. And because old ratings are never deleted, the early high reviews serve as a numerical base that consumers would have to seriously turn against if they were to move the average rating in any significant way. That’s not to say these beers aren’t still delicious, but the question is, should they still be considered the best? Here are the results:

When it came to the beer that most tasters preferred over all others, the clear winner was Avery Brewing’s Out of Bounds Stout. Tasters loved the beer’s roasty flavors, and said that they picked up notes of honey, dark chocolate and coffee as well. It was also one of the few beers that attendees cited as a beer they could drink more than just one of, which isn’t always the case with porters and stouts.

Coming in close behind Avery Brewing was the Port City Porter from Port City Brewing Company in Alexandria, VA, just outside of Washington D.C. Tasters commented that this porter was smooth and velvety, referring to it as an easy drinker, something the tasters admitted they didn’t usually expect from a dark beer.

Rounding out the rest of the top five we had a three-way tie, with Independence Brewing’s Convict Hill Oatmeal Stout, Southern Prohibition Brewery’s Răgana Baltic Porter and Jack’s Abby’s Framinghammer Baltic Porter all receiving the exact same score. These were also the top beers in the flavored and imperial categories, respectively. 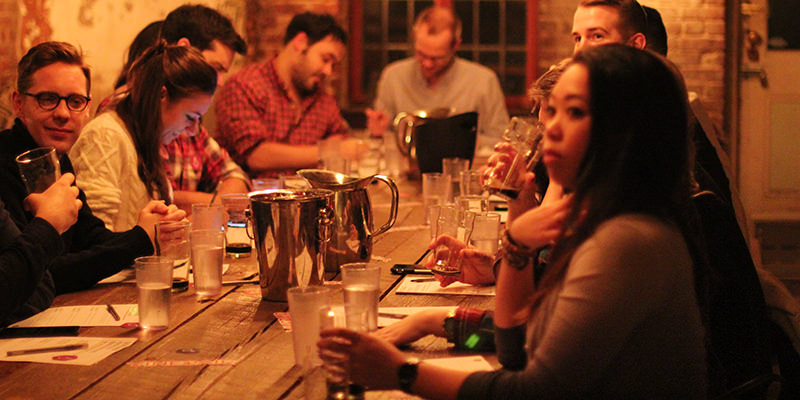 As a whole the porters and stouts with additional flavoring received scores that were higher on average than the rest of the beers on offer. This is probably because many of the tasters commented that at this point they regularly expected to find flavors of coffee, chocolate or oatmeal in a porter or stout, so drinking beers they were more used to flavor-wise could have been a key reason for the higher scores.

While beers that are high in alcohol used to be all the rage among consumers, it was clear from a survey of the panel that this trend is definitely waning. Most tasters cited the main reason as the desire to drink more than one beer in a given setting, and the inability to be able to do so when these beers were involved. That being said, given the right occasion tasters claimed they’d welcome a small glass.

*This beer is only available on draft.