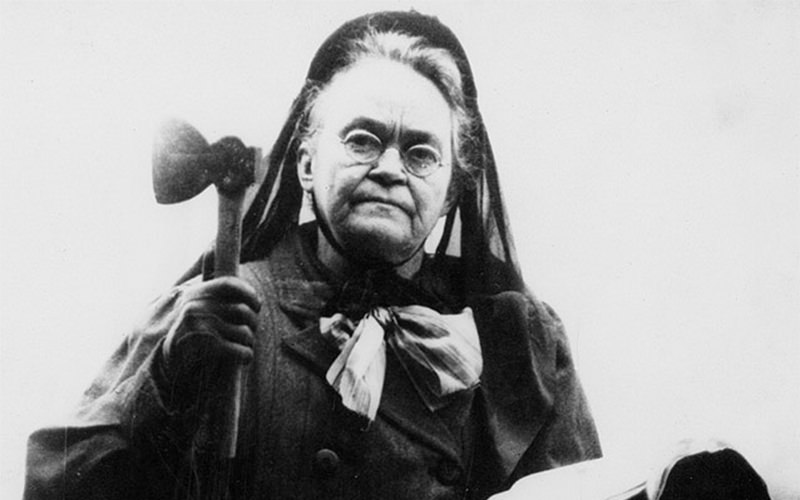 If you see an old lady running at your tavern with an ax, your instincts might stall, overwhelmed by too many questions. Is that an old lady? Yes. Running toward me? Yes. With…an ax? Yes. That seems unlikely. Except it’s not. By the time she’s reached you, half your bar has been hacked through, your liquor bottles are smashed to smithereens, and most of your clientele has made the wise decision to exit the tavern. Stupefied, you stand there and listen as the old woman begins reciting hymns. In case you didn’t know, you’ve been saved by Hatchetation.

Truly. Photos of Nation—who did most of her tavern smashing in the late 19th and early 20th centuries—show a sturdily built little old lady who looks like she could pass for an extra in Peter Jackson’s Hobbiton. Except for the fact that she was 6 feet tall and tended to carry a small ax. Not quite the stuff of Tolkien.

Really nothing about Nation was fantasy. Born into poverty and ill health in 1846, she would become one of the most iconic, militant, and quite possibly delusional figures of the Temperance Movement. Everything she did—from taking aforementioned ax to taverns to earning more than a few black eyes in her campaigning—was very real. So just where did she come from?

However out of left field her methods, nobody like Nation just emerges out of a vacuum. The low wail of temperance had been rising in the country since the early 19th century, spurred on by the Second Great Awakening and religious revivalism (which actually led to certain movements for social justice, including temperance, suffrage, and abolitionism). Nation’s family history also predisposed her to a certain sense of “righteous” grandiosity. Her mother suffered delusions, and by later in life, both Nation’s mother and daughter had been institutionalized.

But what might have really driven Nation to her particularly fervent brand of intolerance of intemperance was probably her first husband, Charles Gloyd. A Civil War doctor, Gloyd was also an incredibly hard drinker. So hard, in fact, that Nation (then Carrie Gloyd) took their only child and left him just a year before his drinking killed him. By the time Carrie married lawyer and preacher David Nation, a profound hatred of alcohol and its evils had settled deep in her gut. Where, it seems, it churned to the point of bursting.

Not that Nation went right for an ax—that’s nobody’s first move. After moving to Kansas, where scores of taverns were running illegally despite statewide prohibition, Nation took gentler strides, protesting and founding a branch of the Women’s Christian Temperance Union. But it rapidly became clear that her fervor outpaced the slow mechanics of social change (the two would never really be in synch), so Nation adopted slightly less common approaches, visiting bars of ill repute and singing hymns to the intoxicated. Which, we can all agree, would be an incredibly effective buzz kill.

Things began to get really real in 1894, when Nation and her posse of “Home Defenders” were ready to raid a local pharmacy. (Just in case you forget the dazzling success story of Charles Walgreen, pharmacies back in the day could sell whiskey.) As the story goes, Nation addressed the owner: “The ladies of the WCTU want to see what you have in here,” referring to a keg in the shop. “Women,” Nation declared, “this is whiskey.” And that was enough. What followed is a sight we hopefully won’t see again until the apocalypse: a bunch of 19th Century Golden Girls rolling a keg onto the street, smashing it, and setting it—and all the precious whiskey inside—on fire. Spoken to by god, as she claimed, Nation was told to “take something in your hands, and throw at these places in Kiowa [Kansas] and smash them.” In June of 1900, Nation obediently took up rocks, or “smashers,” as she dubbed them, and proceeded with her lady avengers to six bars in Kiowa for some righteous destruction of public property. By the end of that year, when the group raided the Hotel Carey, Nation had picked up her iconic hatchet, and her tavern raids became known as “Hatchetations.” By the time Nation had smashed up her last bar—the Home Defenders stopped the raids in 1901—Nation had been to jail 30 times. If street cred were a thing back among temperance activists, Nation should have had it in droves.

And she did, for a time, parlaying her notoriety into several publications (one called “The Smasher’s Mail”) and lecture tours –even selling souvenir hatchets. But Nation was just as easily dismissed, even within the Temperance movement. And the media was often brusquely dismissive, in one case on the same grounds Cosmo might reject a cover model: “Short and dumpy of figure, rather than tall and commanding,” one reporter described her. “Nervous and flighty of manner rather than calm and impressing.” So…if Nation looked more like Uma Thurman, maybe we’d be remembering her with the kind of geeky fandom we reserve for Kill Bill?

Except that rather than wreaking bloody personal revenge among a bunch of unrealistically attractive assassins, Nation was working for social progress, as she saw it. In addition to preaching at drunkards, taking punches for temperance, and throwing righteous rocks at liquor bottles, Nation supported women’s rights and suffrage at a time when women had minimal control over their social fates. Taking up an ax and having a years’ long smashing party might not have been the best way to make friends. But she sure left an impression. Often, yes, a smashed one.