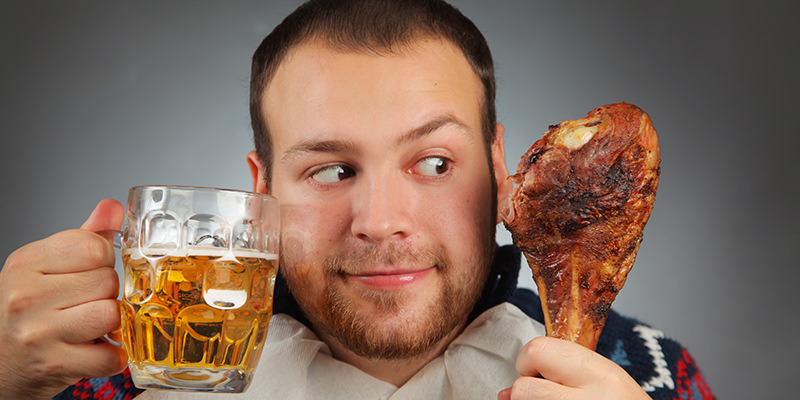 Sure, it’s a little intimidating to pair wine or beer with dinner—there are scores of articles and guides, all of which go through elaborate complement rules before finally telling you “pick what you want, your tastes matter the most.” But even if the pairing dilemma gets a bit exhausting every now and then, there’s good reason to keep doing it: wine and beer might actually help you digest.

On the cusp of a season basically, shamelessly dedicated to consuming vast quantities of food and drink, that’s pretty good news. It’s not entirely certain why, though several studies have been done suggesting that ethanol—in certain concentrations and delivery systems—can stimulate something called “gastric emptying,” a pretty unglamorous phrase referring to digestion in the stomach.

And we’re not talking pure ethanol (thank goodness). In one study, beer and white wine (a low ABV white wine, in fact) were found to have “significantly accelerated gastric emptying in comparison with ethanol of the same concentration.”

Interestingly, the amount of ethanol also matters. Too little obviously won’t do much at all to help you digest that burger, but neither will too much. According to another study, “beverages with a higher ethanol content (whisky, gin, cognac) do not stimulate gastric acid secretion or release of gastrin” (sorry Scotch-and-burger fans). It’s beverages like beer and wine that kinda hit the sweet spot. In that same study, they found “[a]lcoholic beverages with low ethanol content (beer and wine) are strong stimulants of gastric acid secretion and gastrin release, the effect of beer being equal to the maximal acid output.”

Of course, this being science, there has to be disagreement. Another study, where each subject was given two glasses of beer, wine, or water with a meal, found that “no additional effect of beer, wine or spirits on this postprandial response was seen.” (PS, we had to look it up, too. Postprandial literally means “after a meal.”)

But this study was done before the beer and white wine experiment (seriously, can we get in on this science?), so we’ll choose to believe the latest scientific data, because that’s the most responsible thing to do, and it means we get to have a glass or two of wine or beer in the midst of annual holiday gorging.