September claims the title Bourbon Heritage Month, but there’s no bad time to think long and hard about America’s native spirit. Categorically, whiskey is more popular than ever. Consumption of bourbon, rye, and Tennessee whiskey was up 7.7 percent last year, outpacing all other spirits. Brown spirits connoisseurs are constantly seeking out unicorn bottles of limited-edition, special- release, high-end juice.

But let’s not forget about the bottom-shelf bottles, the unsung bourbon heroes. There are some real gems to be found for under 30 bucks. After all, just because bourbon is old, or just because it’s expensive, doesn’t mean that it’s reliably or especially good. Distilleries have some budget staples in their catalogs that are excellent to sip on their own, or can be used to make excellent cocktails. Here are six of the best bourbons you can find under $30 right now. Four Roses is the shining star of budget bourbon. The classic Yellow Label is a tasty, complex whiskey that’s perfect for mixing. It could be sold for twice as much but remains steadfastly affordable. The secret to the Four Roses flavor is that the bourbon is actually a blend of 10 recipes – two different mash bills, each made with five different yeast strains. This should be the starting point for anyone looking for high-quality, affordable bourbon to make any cocktail taste just a bit more expensive. Average price: $19.99 This is a new bourbon from Brown-Forman, the company behind Jack Daniel’s, Woodford Reserve, and Old Forester. It’s distilled in Louisville, Kentucky, and undergoes a filter finishing just before bottling. This means that the whiskey passes through beech and birch charcoal after coming out of the barrel to smooth it out, as opposed to Jack, which is filtered through sugar maple charcoal before barreling. Coopers’ Craft is bottled at 82.2 proof and is sweet and light in flavor – perfect for mixing up a drink. Average price: $26 Distilled at Heaven Hill, Evan Williams Black Label is an excellent budget bourbon. But the white label Bottled-in-Bond is even better. At 100 proof and aged for at least four years, this bourbon is smooth with a depth of character that belies its inexpensive price tag. Note the soft vanilla and caramel flavors throughout. Though available nationwide, it can sometimes be hard to find. But keep looking; Evan Williams BiB will amplify any bourbon-based cocktail. Average price: $18.99 Old Grand-Dad has been around for a long time, but became part of the Jim Beam family in the late ’80s. The bonded version means that it’s aged for at least four years and is bottled at 100 proof. It’s a high-rye bourbon, meaning that the percentage of rye used in the mash bill is higher, giving it a spicy flavor with a bit of heat on the palate along with that typical, nutty Beam flavor. This bourbon is a bit rough around the edges, which may not appeal to everyone. Others will recognize quality in their first sip. Average price: $24.99 This bourbon from Redemption Whiskey qualifies as “high rye” because the mash bill consists of 60 percent corn and 36 percent rye, which is quite high for a bourbon. That means it still has that signature corn sweetness, along with strong notes of black pepper and baking spice from that generous helping of rye. Redemption sources its whiskey from MGP in Indiana, which has been distilling whiskey of high quality for over 150 years. Redemption is young, aged for a minimum of two years, but is full of enough flavor to enjoy neat or with an ice cube. Average price: $26.99 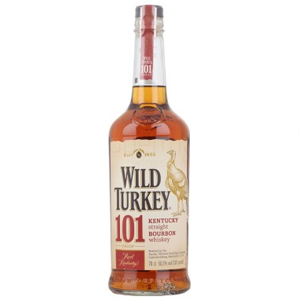 Wild Turkey 101 is classic bourbon – inexpensive, sometimes underrated, and always bold in presence and flavor. 101 is a whiskey drinker’s bourbon, meaning that it’s a little hot, a little spicy, with nice hints of oak and honey to soften it out. Wild Turkey also comes in an 81 proof version, which is all well and good. To get the full flavor of this budget bourbon, go for the 101, with just a splash of water or a large ice cube to mellow it out. Average price: $24.99