When it comes to summertime day drinking, few beverages are as appropriate as a radler. A radler, if you don’t already know, is a mix of beer and citrus juice or soda that was popularized in Europe. It’s not too dissimilar to a shandy (which is also great in the summer). Radlers are usually an easy drinking 2 to 4 percent alcohol by volume, and pair perfectly with sunshine and happiness.

In short, it’s the summer drink you never want to run out of. Here are seven of the best juicy beer mixes to keep your palate satisfied all summer long. This German beer barely even has alcohol at 2.5 percent alcohol by volume. That doesn’t mean it’s not worth seeking out. The brewery labels the radler as “the taste of nature,” and nature tastes so fresh. Hirter is a mix of lemonade and pilsner that’s unfiltered and unpasteurized. We’ve previously suggested the Stiegl Lemon Radler, that’ll be in the United States in May 2016, but if you’re more into pink grapefruit than bright yellow lemons, the grapefruit version is the way to go. It’s a mix of 40 percent lager-style Goldbräu and 60 percent grapefruit soda. At only 2 percent alcohol by volume, you can start with Stiegl-Radler Grapefruit in the morning and don’t have to end until long after the sun goes down. 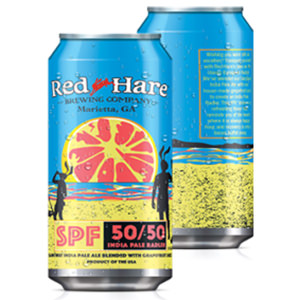 Red Hare decided against going the traditional European radler way with its SPF 50/50, which they call an India Pale Radler. It’s a 4.2 alcohol by volume mix of Gangway IPA and house-brewed sparkling grapefruit soda. The hops from the IPA commingle with the sweet and bitter from the grapefruit for the ideal beach beer. The “calm” acronym isn’t just the mindset you should drink this radler in. It stands for “cucumber and lime mint,” which is the soda used in the beer, and it’s an unbeatable combo when mixed with Goose Island’s hazy wheat ale. Amsterdam Brewing has the radler for you if you like things a bit on the sweeter side. Loaded with tangy grapefruit and sweet orange juice flavors, it’s the perfect beer for when you’re in the mood for juice, but really want some beer too. There’s a surprisingly full body for a radler that makes Sweetwater Squeeze a different type of fulfilling than some of the thinner options on this list. We don’t suggest riding a bike after having a few drinks, but that doesn’t mean you shouldn’t enjoy Parallel 49’s Tricycle radler. It’s a 3.5 percent alcohol by volume mix of Meyer lemon juice and lager beer that smells of lemon and mandarin orange. Want it stronger? No one’s stopping you from adding a splash of vodka, gin, or bourbon, and your taste buds will surely thank you. This Canadian radler is another beverage made with bikers in mind. Red Racer is a light 3.6 percent alcohol by volume mix of Central City’s “ISA” (India session ale) and grapefruit juice that has a light touch of hops and a balance of malt and grapefruit flavors. Goes down like soda — just like a radler should.