Terrapin’s take on watermelon is salty and tart with coriander, like a gose should be. Only this gose has the refreshing summer addition of watermelon. These two flavors belong together, and Terrapin shows that in the best way. This is not your normal watermelon beer. Whereas most summer watermelon releases go for easy, sessionable and subtle, Ballast Point goes full hoppy flavor on the watermelon concept with a 10 percent double IPA. Not your typical summertime sipper that you can crush all day, but it’s also not going to leave you wanting more. A beer that’ll make you dream about taking a Southwest summer vacation. The Watermelon Gose is made with Arizona ingredients, including the watermelon, which is sourced from a field working on water conservation in the desert. And again, gose and watermelon are two flavors that belong together. 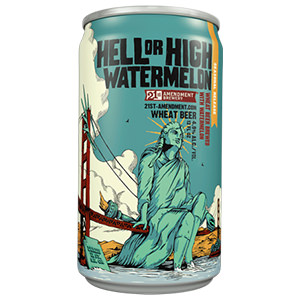 21st Amendment stays on the natural side of the flavor spectrum. It smells like a fesh-cut slice of watermelon and tastes like a well-made wheat beer. It stands out thanks to low carbonation that gives the beer a velvety feel. The noticeable summer aroma of watermelon hits you as soon as you open a can of Tin Roof’s Watermelon Wheat and pour it into a glass. The flavor is more subtle though, staying away from the Jolly Rancher candy flavors that many fruit beers fall in to.

Coney Island Brewing Co.’s Watermelon Wheat is easy like a stroll on the boardwalk. Step in and enjoy the ride of slight cooling watermelon on a wheat beer base. Like many of the best watermelon beers, there’s more watermelon on the nose than on the palate.