Gose occupies a strange place in the beer market. Beer that’s salty and sour is not exactly ordinary for those of us raised on pilsners and lagers. But for those who seek out sour beers, or are curious to expand their horizons, this ancient style is an obvious choice for summer refreshment.

Whether you’re a fan or not yet familiar (or maybe you bought one to try it out, and someone opened it and dumped it down the drain because he thought it was “off” — that was for work, Dad!), there are many types of goses. VinePair’s tasting panel sipped through dozens of goses, from hard-hitting options with waves of ocean flavor, to subtly salty varieties. We agreed on 11 favorites to stimulate your senses this summer. Salty and acidic to the max, with an acidic “twang,” one taster said, thanks to Key lime juice, lemon peel, and orange peel, Suburban Beverage proved divisive for our panel. If you’re the type who likes to pucker up with a mouthful of sea foam, this gose is for you; for those who appreciate a subtler take, continue on. With blood orange and grapefruit aromas, and balanced sour character and refreshing finish, Gose O’s turned one gose skeptic into a believer. This one “definitely made me rethink my stance on not being able to drink more than two goses in a night,” our panelist said. This gose-style ale brewed with passion fruit and guava is golden and cloudy as a summer sunset. On the nose, first impressions are session-IPA-like tropical aromas. “I feel like I’m sniffing a guava,” one taster said, noting its not-too-sweet clean fruit aroma. Indeed, Tropigose is not as explosively fruity as it may sound, drinking dry and refreshing with a sharp bitter finish. This gose riff is, as one taster said, “inoffensive.” Not as tart or salty as the style typically implies, it’s no gose for sour lovers, but it’s no less interesting than the style it emulates: Panelists detected aromas of raspberry ice cream and frozen berries, enjoyed its medium-light mouthfeel and crisp flavor, and commended its clean, fruity finish. Funky, fruity, creamy, and tart all at once, this member of Destihl’s Wild Sour Series is brewed with French sea salt, coriander, and blueberry puree. Drawn in by its hibiscus shade of red and tart berry aroma, our panelists enjoyed the juxtaposition of this gose’s soft mouthfeel and sharp acidity. As one taster noted, though the initial flavor is not overwhelmingly, or even obviously, blueberry, the lingering finish hinted at blueberry pie. This puckeringly tart gose is extreme in its acidity. But citrusy dry-hop character and coriander save the day, bringing bright spice and lemon-lime refreshment to this complex brew. Mineral salinity makes it a mighty fine brine companion, too; the brewery recommends enjoying W4 with oysters. A great gose for beginners, Jammer is sweeter in flavor than other goses, and leans hard into coriander. Its fresh sea salt is subtle, hinting at an ocean breeze as opposed to a wave crashing into your face. Tasters found this to be the most sessionable gose as well. Consistently stellar since its initial release in 2012, Westbrook Gose continues to reign as a VinePair staff favorite (it’s also one of our staff picks for the best beers of summer 2018). The coriander and salt are balanced, and the soft, wheat-driven mouthfeel offers peak refreshment. Puckering, beachy, salty, and summery all year round, this gose is one for the books. Another staff favorite for its sessionable quality, this bright and citrusy gose is gentle enough to crush while invigorating enough to raise your eyebrows in happy surprise. Made with clementines sourced from a juicery near Two Roads’ Stratford, Conn., home, Clementine Gose offers a fresh, small-batch quality you won’t find at many breweries this size. Check out the rest of the goses in the Tanker Truck Series — they’re all delicious. 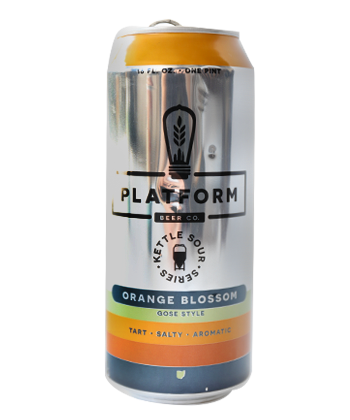 Kettle sours are often overdone. Such is thankfully not the case with Platform’s Orange Blossom, a gose-style kettle-soured ale brewed with orange zest that our tasters found to be the best beer of the lot. Wafts of fresh grains and sea breeze gave way to salt and lemon, while the flavor was lightly tart without being too acidic. Emulating the original German gose with its mild acidity and light-salt character, this was our panel’s fast favorite.