There are lots of ways to describe a batch of homemade wine: Hooch. Prison wine. Garage vino. A potential disaster in the making.

What if you described it, instead, as the product of a multi-million dollar enterprise and an accessible way to get young people into wine? That’s, at least, what one company claims.

Launched in August 2020, Brewsy is a brand of winemaking kits that bring a creative approach to homebrewing for the masses. The $115 basic kit positions itself as a foolproof dive into winemaking and uses a process touted to be “easier than making pasta from the box.”

Amateurs have navigated the trial and error of winemaking in their backyards for centuries — so what makes this kit so special?

Dear reader, we were skeptical at first.

Brewsy’s social media ads make the kit seem fun and accessible, but does it really create drinkable vino? To answer this burning question, the VinePair staff recently tested out the brand’s starter package at our New York City office. Full disclosure: This news writer has never stepped into the shoes of a winemaker until that day, so expectations were appropriately modest.

The kit wasn’t easy to miss when it arrived in the mail: Brewsy is packaged in a hot pink and baby blue box, embellished with hearts and other cutesy designs. (It’s clear that it was designed with the millennial in mind.) The kit contains three “Brewsy bag” packets and two rubber stopper airlocks. The proprietary mix in each sachet, per the brand’s website, includes wine yeast, organic micronutrients, potassium bicarbonate, bentonite, and malolactic culture.

The brand plays off established Gen Z and millennial habits, incorporating technology into the process to help those unfamiliar with winemaking. (Read: anyone buying a fermentation starter kit from an Instagram ad.) There’s a text hotline with a support team available 24/7 to answer any questions. A mobile app also connects Brewsy enthusiasts across the world and even allows users to follow the fermentation process of their works in progress.

Among the many questions one soon finds themself asking during a first dip into the hooch pool is where to place the fermenting wines. The Brewsy team texted back promptly, responding with the brand’s trademark friendliness and even an old-school smiley face.​ They provided the ideal temperature for the fermenting wine (75-85 degrees Fahrenheit) and pointers to help the juice mature. CEO and founder Neal Shulman says this is all part of the brewing experience. Brewsy itself is quite young — it was founded in 2020 — so it’s only natural that the brand has a soft spot for beginners. The entire product was built around a desire to create a safe space for curious brewers, allowing them to learn from others and carve their own path.

“Part of what we’re trying to do at Brewsy is break away from this classist, sort of snobby, hotty-toddy — whatever word you might use — wine culture, where wine made from fruits in your backyard isn’t as good as those made in Italy or France,” Shulman says. “But when you go to Italy or France, you’ll find that most wine is made in someone’s backyard, or by someone’s grandfather, or in someone’s garage.”

While the techy approach is unique to Brewsy, fermentation kits are not. Gone are the days when only middle-aged dads concocted wine in their garages; the new generation of brewers buys instructional kits that align with their aesthetic values. A similar company, Brooklyn Brew Shop, offers kombucha, wine, and beer-brewing kits with a similar audience.

Obviously, the Instagram-able Brewsy boxes are a completely different scale and process from the commercial winemaking process. But, once you get down to the science of it, are they really that dissimilar? Enologist and wine educator Jenne Baldwin-Eaton doesn’t think so.

In the past, Baldwin-Eaton has used similar winemaking kits to instruct her fermentation science classes at Western Colorado Community College. She got her start in fermentation chemistry while working in 1994 at Plum Creek Cellars in Colorado, so she speaks from experience in both homebrewing culture and larger-scale, professional winemaking.

Kits like Brewsy take some of the guesswork out of creating good wine, Baldwin-Eaton says. There’s no need to worry about adjusting the pH level of grapes or accounting for natural conditions that could yield unexpected results. Solutions like Brewsy are commonly very controlled and eliminate the scientific nitty-gritty, she says.

In developing the kit, former product designer Shulman says he began by testing numerous homebrewing kits already on the market. He describes the preexisting options as “boomer-esque,” noting he felt lost without consistent support and advice. He reached out to supply companies that supplied wine yeast, malolactic cultures, and other ingredients to operating wineries, obtaining the ingredients and testing them with different juices. After five months of 12-hour research days, he finally landed on the ideal formula for quick-fermenting with packaged juice.

“Our goal is to have a packet that could ferment wine from start to finish in five to seven days. We were laughed at and told that was impossible by many people in the industry, actually,” Shulman says. “The Brewsy bag does that, though.”

As for the safety element, cautious homebrewers might wonder if a misstep could make them blind or cause further physical harm — a myth that’s said to originate in Prohibition-era distilling.

It’s quite the opposite, actually. Typically, the worst that can happen is a broken glass bottle from fermentation pressure. After ensuring that the recipe was safe, the VinePair team combined remarkably large amounts of sugar, the Brewsy magic formula, and the cranberry juice recommended by the brand. Shulman says beginning homebrewers can start with tart cherry or cranberry juice to set themselves up for success — while tasty, this fermentation base is quite different from, say, Cabernet Sauvignon grapes. Instructions were a bit vague at points, and our novice winemakers were left wondering how long to mix the yeast.

After a healthy amount of mixing, the team popped on the rubber airlock stoppers and filled the cap with water. (The instructions don’t explain how this works, but the Brewsy website states that it allows air to escape while also sealing the container.) Then the gallons of vino were set to rest, covered, in a warm corner of the VinePair office. Brewsy’s standard kit doesn’t include fermentation containers, so gallon-sized water jugs from Whole Foods were the move.

The process was, admittedly, quite enjoyable. “The hardest part of selling Brewsy on the internet is people even believing that it’s this easy or even real,” Shulman says. “There’s so much skepticism and myths surrounding winemaking.”

When the VinePair Vino had reached maturation, the team tasted it for appropriate sweetness before placing it in the fridge. The color developed into a light orange or pink, reminiscent of a light rosé, with a bit of sediment left from the fermentation. After the wine rested in the cool temperature of the fridge for a couple weeks, all sediment settled to the bottom and the wine cleared. All things told, the finished product sits somewhere between 12 and 15 percent ABV, according to the kit’s instructions.

The final result? A (surprisingly) tasty, bright wine with a balanced flavor. While perceived sweetness was notable in the wine, VinePair tastings director Keith Beavers says the tannins from the cranberry juice provide ample framing and structure for the residual sugar. This particular fermentation process resulted in a slight sparkling quality as well.

Beavers isn’t the only person to enjoy the final product; the popularity is clear in the sales of the kit to date.

While the company is around 900 days old, Brewsy recently hit over 60,000 kit orders and $2.5 million in sales, according to Shulman. John Elstrott, a former chairman of the board of Whole Foods, also backed the brand and personally invested in the company in 2021. The Brewsy app community shares the love, too, with numerous users gushing (and bragging) about their latest brews on the app. 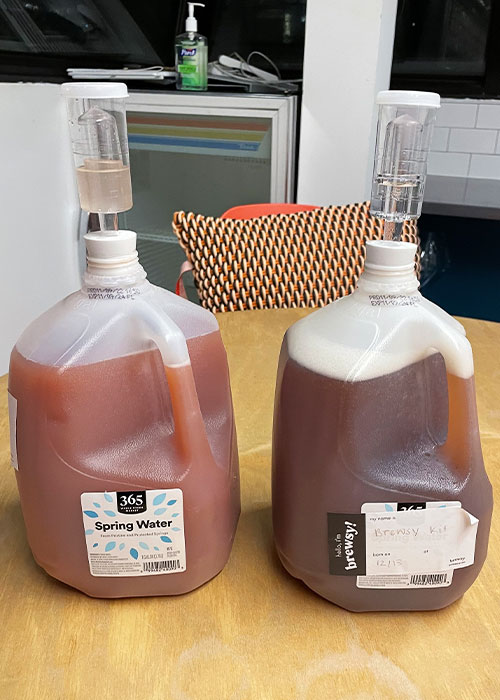 “It’s really about making winemaking as easy as cooking,” Shulman says. “We believe in a future where people make their own wine as much as they make their own dinner.”

Now that’s something to raise a glass of hooch to.